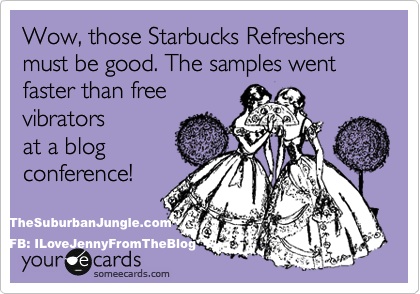 I know, you're thinking, wait, haven't I heard this one before?

Yes, the number is six. Crap, I kinda ruined the suspense on that one, huh? I shoulda' made you wait until the end. It was premature elucidation, which is fairly common when talking vibrators.

More importantly, you should be wondering, How did you calculate this number and what does one do with so many vibrators?

Honestly, I've never seen anything quite like the Trojan booth, which was giving away free Trojan Vibrations Tri-phoria vibrators at their Friday vendor expo.

There were women walking away with four, five and even six vibrators tucked in their bags, under their arms, under their chins, and g-d knows where else. They were scrambling to the floor to grab boxes that had dropped in the shuffle, like someone had busted a massive vagina piñata or something. (Which, by the way, is an awesome idea for a birthday party, right?)

Not one of these ladies seemed the least bit ashamed or embarrassed. They grabbed their swag with the same nonchalance that you would take a handful of mints on your way out of a restaurant.

Now that you know how I got the number, I must ask the next question: What could one possibly do with six vibrators? Look, I read Fifty Shades, I'm a worldly gal. I've even asked how well do you know your vagina, but for the life of me, I can't figure out how exactly this would work.

I drew a diagram on the plane, but stopped when the elderly gentleman to my left started clutching his chest. He, by the way, was of no assistance when I asked if he could think of any orifices I'd missed.

So I ripped up my diagram and pondered the other options.

Maybe some women are even more OCD than me, going through vibrators like I go through wet naps.

Why, just one of your six vibrators could probably satisfy an entire village. I bet you didn't think of that when you haphazardly threw your barely used toy in the trash. You cold hearted waster!

You probably didn't even recycle it!

I sincerely hope I'm on the wrong track, because that line of reasoning seems unnecessarily insensitive.

I was given another explanation while questioning a woman at the an event on the last day of the conference as to how many vibrators one needs (cause that's an awesome icebreaker... seriously, try it).

Yep, she'd taken four, and why?

She said, "they make good gifts."

WHY DIDN'T I THINK OF THAT?

Oh, and while I'm here, I should grab one for my mother and the dog sitter, and oooh, my son's teacher. I never have anything for teacher appreciation day and I bet none of her other student's parents take a second to consider her vagina.

Wait, I hear they're giving a big tub of lube away at the Banshee party, so I should make sure to swing by there, because a true friend would consider possible vaginal dryness.

I know, you wish you were my friend now. But alas, I only got 1 Tri-Phoria, so don't try to become close with me in the hopes of getting free sex toys.

Plus, I'll know that's why you're calling to have coffee.

PS - I called the peeps at Trojan and they said they would give some to my readers who were not fortunate enough to be in NYC yesterday. Yay! No lines! You can check out my site: The Suburban Jungle for details.