The Centers For Disease Control and Prevention issued a new report on food safety this week that had a little good news, and quite a bit of bad news, for American consumers.

The report, which is based on data collected by the CDC's FoodNet program, compared food poisoning rates in two three-year periods, 2006-2008 and 2011-2013. It showed that infections caused by the dangerous O157 strain of E. coli, which caused the notorious Jack in the Box food poisoning outbreak of 1993, declined by 32 percent between those two periods. Sicknesses associated with Yersinia and Salmonella serotype Typhimurium also dipped over that same span.

However, rates of several other serious types of food poisoning either increased or stayed flat between the two periods studied in the report. Overall, salmonella and listeria rates stayed the same, while infections of Campylobacter, which usually causes fairly mild stomach distress, went up by 13 percent.

More troubling still, though, was the change in infections caused by bacteria of the genus vibrio, which is usually spread by the consumption of raw shellfish, especially oysters. Vibrio poisonings in the FoodNet system shot up by a shocking 52 percent between the 2006-2008 period and the 2011-2013 period.

This chart summarizes the findings of the CDC report: 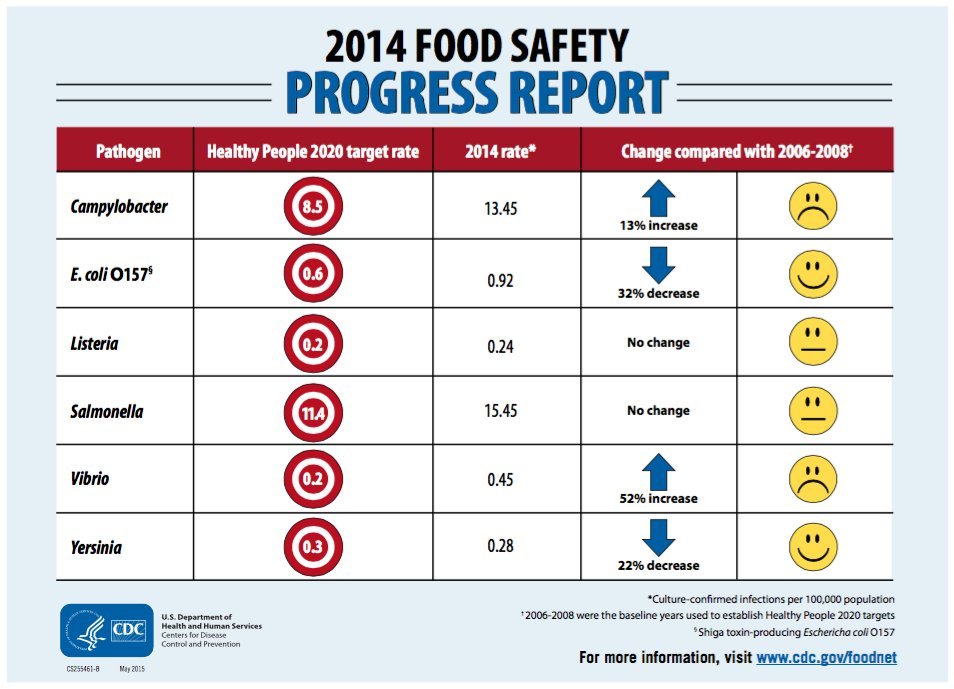 As you can see on that chart, vibrio illnesses remain exceedingly rare, with FoodNet finding a rate of infection that translates into just 1 in 222,222 Americans. What makes it a topic of concern, besides the massive increase, is that vibriosis is known as one of the most serious couple types of food poisoning around. About half the people infected by vibrio vulnificus, the more virulent of the two common strains, are killed by the bacteria. And many of those who survive the disease are left with life-altering disabilities, including amputations.

Vibriosis rates have been increasing for years, and scientists aren't completely sure why. Two likely factors are booming consumer demand for raw oysters, especially in restaurants, and better food safety monitoring systems that are catching exactly how many cases occur. But vibrio also flourish in warm water, so many scientists believe that climate change has made the bacteria more common in areas that have always harbored them, such as the Gulf of Mexico, while also bringing them to waters that were once too cold to sustain them.

Going forward, if the world's oceans continue to heat up, vibrio will likely proliferate even further -- pushing vibriosis rates up as well. Cooking oysters thoroughly kills the bacteria, so regular eaters of po-boys and oysters Rockefeller don't have too much cause for concern. But if you're a fan of raw oysters, this is yet another reason to be very concerned about climate change.

Food Scandals That Have Rocked The World