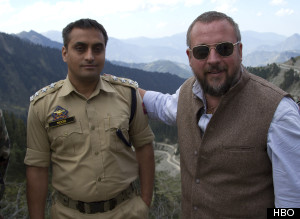 There you are at the party, just trying to find a drink, when a tattooed guy three drinks in to his evening trundles up to you. He tries to engage you in a conversation about current events.

"North Korea, man!" he begins. "Is that some messed-up shit, or what?"

"And damn, I bet one of these days, India and Pakistan are just going to blow the whole world up, amiright?" he continues.

"Yeah, possibly. Hope not." You scan the room for someone who does not reek of Jagermeister and bongwater and who is not wearing their sunglasses indoors.

Uh, a lot of people, actually. The majority of news and commentary on world affairs may have moved online, but for that very reason, it's more accessible than ever. You can avail yourself of any number of news reports, analyses, travelogues, histories and documentaries on world affairs at any hour of the day or night.

You want to say this, but you're not sure what the point would be. You just stand there, marveling at how proud Mildly Drunk Guy is of his newfound grasp on Shit That Matters. You're torn between being glad that he took time out between visits to the tattoo parlor actually to educate himself about world affairs and a feeling of annoyance that this guy is so impressed with himself for managing to remember a couple of Wikipedia entries. He wants a pat on the back for knowing anything at all, but isn't keeping yourself at least a little informed part of, you know, being an adult?

The situation I've just described is how I felt while watching "Vice" (11 p.m. ET Friday, HBO), which is awfully pleased with itself for interviewing Taliban dudes and totally sick gun-makers in the Philippines. The introduction to the show explains that it's going to help "expose the absurdity of the human condition," which generally involves bros in other countries being totally uncool to other bros. What's up with that, bro?

Truly, I get what "Vice" is trying to do, and while the desire to shed light on world issues is laudable, and some of the show even works, the sloppiness of the execution and the egocentric nature of the beast can be pretty damned hard to take.

There is definitely a place for shows that cover world events in nontraditional styles for target audiences that are largely composed, I'd guess, of frat dudes who want to, you know, know stuff. They know HBO has tons of boobs and also some Serious Art and stuff, and they know they should want to learn about all the messed-up stuff that goes on in Afghanistan and North Korea and other places full of foreigners, but they don't necessarily want to take time away from their bro-tastic activities to read super-long articles that kind of have too many boring historical sections.

Presumably these dudes will turn to "Vice," a travel/news hybrid that may not have been written by a moderately hungover college sophomore but certainly comes off that way.

The HBO show, a spinoff of a successful magazine and online empire, has already gotten a great deal of press for an upcoming episode that depicts Dennis Rodman's trip to North Korea and his visit with its new leader, Kim Jong Un. Members of the media didn't get that episode in advance, but I expect it'll fit the general pattern of the TV show: Some weird shit will go down, there will be a few lines of commentary about a messed-up dictatorship, and that'll be that.

In the two episodes that HBO did send for review, host/Vice co-founder Shane Smith travels to Afghanistan and India and Pakistan, and yes, he did wear shades inside when talking to an India-Pakistan expert about the poor relationships between those countries. What bothered me most -- and this was a problem with most "Vice" segments -- was that there was no sense of whether the correspondents ever wondered whether they were being used by one side or another. There's a disturbing credulity that runs through the entire venture, and while being open-minded is crucial to being a reporter or a traveler, there's such a thing as being too naive.

Do the "Vice" correspondents ever think they're being played by forces that are using this hipster media outlet to their own ends? Do they care? It's hard to escape the sense that they don't while watching a lighthearted Smith, escorted by Indian military guys, stick his foot on the bitterly contested dividing line that separates India from Pakistan. It looks as though all he really wanted were some killer photos for his Instagram account and a cool story to tell his friends. We'll find out in coming weeks if correspondent Ryan Duffy got similar mementos when he visited the Pyongyang Skate Park -- and if he or Rodman ever asked members of the regime about the murderous oppression of the North Korean population.

In another piece, one of Vice's correspondents (all of them white dudes who look as though they were plucked out of Greenpoint coffee shops) travels with a political candidate in the Philippines. Politics are so fraught there that candidates must travel with heavy security in huge convoys, because bloodshed often accompanies elections. We're told elected positions can help politicians acquire wealth -- hence the fights over voting -- but what are the methods used to acquire that wealth? Why hasn't the government been able to stop the violence? Who funds the security of the candidate with whom the "Vice" correspondent traveled? All good questions -- none of them addressed by the piece.

Similarly, Smith tells viewers of the many scary things he had to go through to interview a Taliban official in Afghanistan, where he goes to investigate a wave of young suicide bombers. He finally sits down to talk to the Taliban guy, but never asks him about the ages of recent suicide bombers, and the treatment of the issue is muddied in the piece as a whole. Teens as suicide bombers don't appear to be a new issue in certain parts of the world, sadly, but what are the numbers on kids, say, younger than 14 who try to blow themselves up -- or who succeed? If the numbers have gone up, how much have they gone up? The "Vice" story doesn't say.

What the piece does have, however, is graphic images of the aftermath of suicide bombs, including a shot of a severed head.

It's the sloppy approach to context and the tabloid-y aspects of "Vice" that are ultimately harder to take than the self-aggrandizing bro-ness of it all. Some of the interviews are interesting and on-point -- Smith is good with the Afghan kids -- but the show would have been on to something if it had united its mildly irreverent tone with sharp insights and illuminating, lightly deployed research. Things we didn't need: Two different shots of 9/11 footage, and the Maxim tone that crept into a piece about a South Korean pastor who rescues North Korean refugees, some of whom work for sex sites.

Not cool, bro. Not cool.