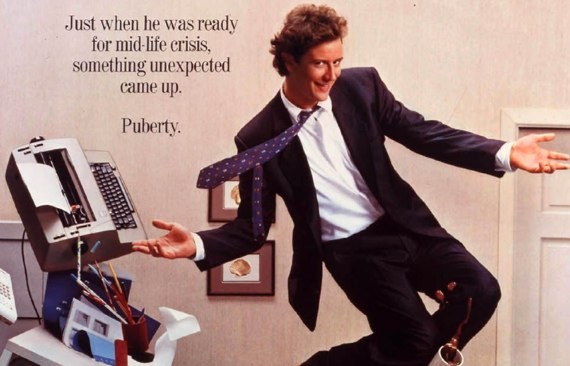 It was never an intention of mine to write a retrospective on a film as disposable as Vice Versa, which is celebrating its 25th anniversary this week. (Happy birthday, Vice Versa, I guess?) Actually, the only thing remarkable about Vice Versa is that it was the first movie that taught a 13-year-old me that Hollywood has a habit of recycling ideas. Yes, welcome to 1988: the year of adults becoming children.

Since you haven't seen Vice Versa (at least I assume that you haven't, at least not recently), it stars Judge Reinhold and Fred Savage as father and son who, due to some sort of magic involving a skull, switch bodies. There were a lot of movies like this in 1988.

Technically, this particular trend of adults becoming children started in 1987 with Like Father Like Son, starring Dudley Moore and Kirk Cameron (they switched bodies because of a potion of some sort). You see, at least Like Father Like Son, a rip-off of Freaky Friday, had the good sense to come out 11 years after Freaky Friday; Vice Versa, comparatively, came out only five months after Like Father Like Son. So, it was Vice Versa that caught my 13-year-old self's vitriol: "Hey, wait, I just saw this movie!" Which is weird because when I was 13, I was easily entertained by pretty much anything.

It's always amazing to me that the go-to example of this particular phenomenon is 1998's Deep Impact and Armageddon. Those looking for a perhaps slightly more esoteric example will spout off Dante's Peak and Volcano. Or, if a more recent example is needed, Buried and 127 Hours will do the trick. (And hang on to your hats, everyone, because we're all about to be inundated with movies about magicians, for some reason.) But the really remarkable thing about the "adults becoming children" trend is that there were five of these movies in an 17 month span.

After Vice Versa came the epicenter of these movies, Big. Yes, Big is a great movie and its star, Tom Hanks, received his first Academy Award nomination for his performance. And Big was fortunate enough to dodge a lot of direct comparisons to Like Father Like Son and Vice Versa because, thankfully, there's no father figure to switch places with. (Actually, for all we know, Josh Baskin is the result of a virgin birth -- just like Anakin Skywalker.)

So, Josh Baskin gets an adult body, but it's still the same premise: "magic" gives Tom Hanks the opportunity to act like a child -- he just did it better than the actors who came before him. (Hanks had the good sense to realize that not every 12-year-old speaks in a stupid, Buddy Lembeck from Charles in Charge-type tone of voice.)

And that brings us to 18 Again, the movie that mercifully killed this trend. Actually, if it weren't for 18 Again who knows how long these types of movies might have continued? Perhaps Moore, Reinhold and Hanks would have all eventually joined forces in one big Avengers-style team-up movie. Have you seen 18 Again? Boy, that's a grim movie. Basically, if Kirk Cameron and Dudley Moore's age difference wasn't a wide enough gap for you, 18 Again went all in by casting Charlie Schlatter (who would go on to play the television version of Ferris Bueller) and George Burns. I can only assume that the sight of George Burns, who was 92 at the time, trying to act like a "young" and "hip" Charlie Schlatter was so disturbing, they decided that "coma" was a better option for Burns once the switch takes place. So, yes, George Burns' character, Jack, gets Schlatter's body while Schlatter, as David, gets to inhabit a body that's in a coma. This is a comedy, by the way.

The nail in the coffin (at least until Freaky Friday was remade) came in the form of Dream a Little Dream. In this version, Jason Robards becomes Corey Feldman -- which marks probably the lowest point in Robards' storied career. (If you are currently thinking anything bad about Max Dugan Returns, shame on you.) Not only did this movie officially mark the end of a trend that was already dead a year earlier, it pretty much ended the two Coreys reign at the box office, too. (There's a perception that Feldman and Haim were always in schlock, but their prior collaborations, The Lost Boys and License to Drive were modest successes.)

It was strange watching these movies as someone at least around the same age of the younger characters, because, at that time, I could relate -- yes, I wanted to be older. But they were also infuriating because the "adult playing the child" had a tendency to come off as a moron. Though, as someone now in his 30s, I have no desire to become a child again. Then again, I'm sure when I'm 92 I would happily switch places with Charlie Schlatter. (Well, not the real Schlatter since he's older than I am and I suppose that will defeat the purpose when I'm 92. I digress.)

Mike Ryan is senior writer for Huffington Post Entertainment and he can't believe he just wrote 1000 words about Vice Versa. You can contact him directly on Twitter.