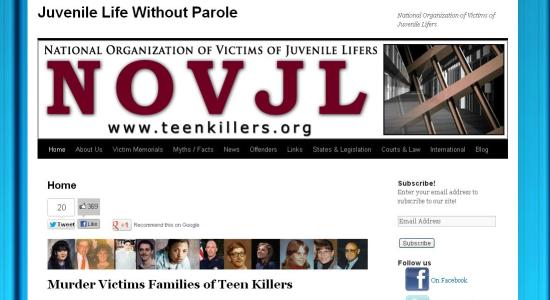 As part of Youth Radio’s juvenile justice coverage, we spoke with Jennifer Bishop, the President of The National Organization of Victims of Juvenile Lifers -- an organization dedicated to advocating for victims’ rights in the criminal justice system.

Bishop’s sister was four months pregnant when she and her husband were murdered by a teenage offender 22 years ago. That individual is currently serving a life sentence in prison.

The Supreme Court decided in June that courts must limit life sentences when hearing cases that involve offenders under the age of 18. In other words, states can no longer mandate life sentences for young murderers. Several states, including California, have passed subsequent bills that allow offenders sentenced as minors to life in prison to appeal their sentences after serving 15 years in jail.

Bishop believes these bills will be found unconstitutional, and that the Supreme Court ruling doesn’t apply to retroactive cases. Check out a Q & A with her below.

Youth Radio: Is being sentenced to life in prison similar to being given a death sentence?

Bishop: There is nothing that rankles me more than people who say a life sentence is the same as a death sentence. It is not... They have not been sentenced to die. Yes, they will spend their lives behind bars, yes, they’ve lost their freedom. But you know what they get to still do every day? Grow old. Talk to friends. Laugh, cry, feel pleasure, feel pain, learn things, sleep, exercise, eat. In many states get married, in many states have sexual relations, publish books … they can contribute to a better society.

You support life sentences, but you are against the death penalty. Can you explain why?

Bishop: I am against death penalty because someone from my family has been killed. ...I have experienced something so horrific that most people have never experienced... For that small handful of us that have been touched by murder we understand that when somebody is killed in your family, no matter what the reason or the cause, it’s devastating. I could not in conscience contribute to the murder of another mother’s son or another brother’s sister in any way. …

I cannot ethically say that I think that what happened to my sister and her husband and her baby is wrong, and then turn around and support the state doing it to somebody even if they’re guilty of a horrible crime.

People on the other side of this issue think young people are still developing, and advocate for giving young offenders the chance to rehabilitate. What do you say to them?

Bishop:They refuse to recognize and they’re very naive in this perspective, they’re naive in their desire for the fact that everyone’s... fixable and deserves to be set free. It’s not accurate. The sad fact is that there are people that are too dangerous to walk among us.

California recently passed Senate Bill 9 that allows offenders who were sentenced to life without parole to appeal their sentences. What do you think about this?

Bishop:California recently passed a bill SB9 that will retroactively undo life without parole for teen killers. There are 300 plus cases that this bill will affect, and not a single one of the victim’s families was notified by the state of California, by the bill’s sponsor, or by the advocates who claim to be human rights advocates.

What do you see as the right balance between victims’ rights and offenders’ rights?

Bishop:Victims have a right to be heard in the process, they are key stakeholders in any public policy conversation about criminal justice matters -- they need to be heard and included. Given the 1300 cases of juvenile life without parole nationwide, there are thousands of victim’s family members of these teen killers... and we are trying to make sure that they all know that there is a national advocacy movement determined to retroactively undo life sentences that those families walked away from believing they were permanent.

How do you feel about Restorative Justice as a method for improving the criminal justice system?

Bishop:The word restorative cannot apply to a murder, because you can’t restore somebody who’s been murdered. There’s another term -- transformative justice -- that seeks to transform the experience for both offender and victim. I’m a strong supporter of that.

We need more restorative justice programs. It’s a right for victims. If they want to have a conversation with an offender, they should be able to.

In your experience, what do young people think about the issue of life sentences for minors?

Bishop:When I go into high school classrooms and talk about this issue [and I visit all kinds of schools] the consensus is virtually universal. I’ve almost never had a student speak out on anything but this point of view. They recognize -- high school juniors and seniors -- that killing is wrong. They know that anyone who would pre-plan, cold-calculate a horrific torture murder is a seriously dangerous person... these students recognize that a life sentence is entirely appropriate when there has been due process.