In the early 60s, French philosopher Gaston Bachelard wrote "The Poetics of Space," a dreamy exploration of how we experience intimate spaces in our homes. "Our house is our corner of the world," he wrote. "It is our first universe, a real cosmos in every sense of the world." To speak with designer Victoria Klein is to be reminded of Bachelard's reverie.

Klein became an interior designer in her 50s, merging a lifelong fascination with color, textiles, and the "dressmaker details" of the trade with a passion for historic preservation. Klein believes that "rooms in our homes reflect the rooms inside our minds" and that interior design "is not about just moving pretty objects about -- but having a real intelligence and context behind it."

Inspired by the sensual disarray and personal exuberance of European design -- notably as it is expressed in English country homes -- Klein works much like a painter. In describing an exhibit of Charles James couture on her blog, she describes James as having an "astonishingly unusual, slightly off, yet perfectly pitched sense of color." She could very well have been describing her own sensibility.

I recently spoke with Klein about her inspirations and ideas.

How did you come to embrace interior design in your 50s?

I went to grad school in architecture in the 70s but always loved color and was into fabric and collecting vintage clothing from late sixties. I was very interested in ornaments. At the time it was almost embarrassing to be interested in ornamentation coming out of 60s. Schools were still very influenced by the Bauhaus era. But I loved ornaments.

I was interested in older buildings as well and didn't see myself as an architect. I went into fashion design and eventually various disciplines came together for me as an interior designer. I discovered that I was really good with my clients. I realized that I wasn't really psychoanalyzing them, but that I was really bringing things out of people. It ignited my curiosity and creativity. I could feed on what they wanted. I think everyone plays their own leading role in the movie of their lives.

You write on your website that you believe rooms in our homes reflect the rooms inside our minds. You definitely have a more philosophical and even psychological orientation to interior design -- to space and to things.

Yes, I've been around a lot of people who are little puritanical about things. But things are the stuff of everyday life. People should allow themselves to delight in them. They carry memories and there's nothing wrong with nostalgia.

Spaces can express a sense of yourself, or parts of yourself that you'd like to express more. I don't think you can go wrong if you start with the things you like to have around you. There's been this trend since Martha Stewart -- I love what she did, bringing back a reverence for domesticity, which is cool -- but there is also this sort of Puritan thing that Americans always lean toward. It's a tremendous need for order. For everything to be contained. I really think it comes straight from the Puritans. But there's room for quirkiness and having fun.

Isn't that what we love in European homes? There's a certain personality and sensual disarray to European homes, or what's reflected in the title of your blog: "Promiscuous Assemblage."

Yes, that's absolutely right. My favorite -- and the most promiscuous assemblage -- is in England. The English throw everything together. They're kind of sloppy in a way, but wonderfully sloppy. And everything is about personality in England, except perhaps for someone like John Pawsan, who's an uber-minimalist. But aside from him, everything in England is about your personal life. English country houses are about layers and layers and layers of family and lived experience. I love French and Italian design, but England tugs at my heart strings. It's so deliciously personal.

Was your transition into interior design a progressive one, or was there something that happened when you turned 50 that compelled you to change?

I had a very difficult time with my mother. I did all sorts of things, but I didn't think I could do anything well. Then when I was around 50, my mother got Alzheimer's and she couldn't hurt me anymore. That came at a time when the kids didn't need me quite as much. I realized how much I loved working on houses.

So your mother was more of a long-term psychological obstacle?

Yes. My mother was mentally ill. Having a mentally ill family member is incredibly difficult and there is very little help for other family members. So I was kind of in prison for a long time. My mother's illness was a huge part of my life. She was after me constantly. She was really, really out there. Really hard. I was eventually able to move on. I'm not proud of myself for not having moved forward earlier, but that's how it worked for me.

What shaped your aesthetic at a young age that emerged later in life when you became an interior designer?

I went to an incredible girls school. It was in this amazingly atmospheric series of buildings on a huge estate. And it was run-down, the buildings all had names, there was dust everywhere, really heavy, giant oak doors and ironwork. It was reminiscent of "The Prime of Miss Jean Brodie." Its aesthetic had a huge influence of me. I took it all in. I loved it. It flavored my life forever.

What is one thing that you know now that you wish you knew growing up?

I would say that everything you do combines, no matter what you do, to make a whole. I didn't understand this earlier in life because my brothers were all railroaded into being doctors. I thought that there were these separate kinds of things to be. You were either an architect or an editor -- a this or a that. I didn't realize that you could do what you loved and were good at, even if it's simply an interesting little corner of a profession. That might be just the perfect thing. That's what I'm trying to emphasize with my children. I want to emphasize their strengths and passions. Having passion is a great thing. It means you're going with your gut. And when you're older, you work much better if you love what you do.

Many people in their 50s want to change their lives or let go of stuff, physically or emotionally. If someone in this demographic wants to redesign their home or simply change their personal space, what's the best way to start?

I think the central idea is to be comfortable; to get clear on what brings you comfort. Once you're 50, you have a lot of stuff, so think about what's your favorite stuff. I wouldn't eliminate it, but I think is there is always room to grow and cultivate personal interests and express them in one's home. Living is a growth industry.

Check out our slideshow below for some of Klein's favorite designs. 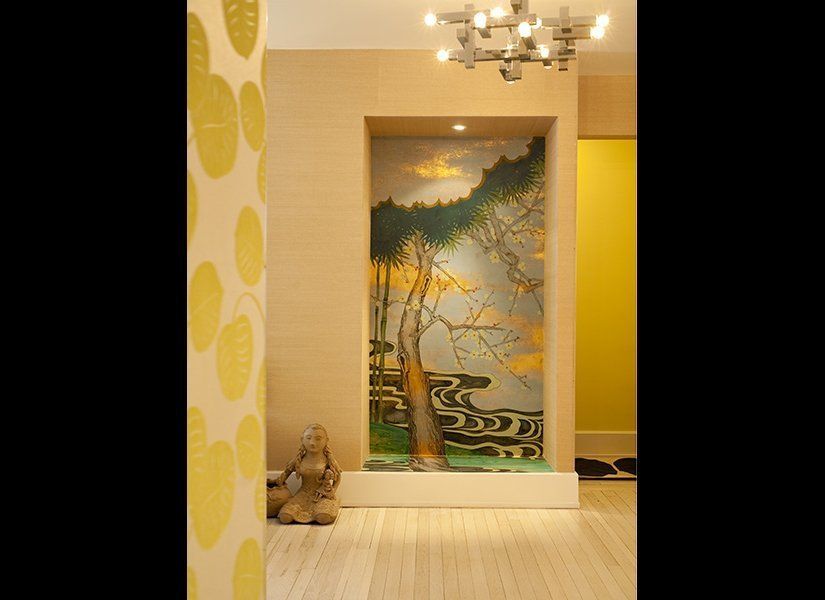 1 / 12
This is the entrance to an Upper West Side Manhattan apartment that was extremely dark (all exposures faced brick walls or other buildings). The clients had some wonderful heirlooms, mid-century furniture and lighting that were all restored. There was a mirrored indent in the wall facing the apartment entrance. Klein replaced the mirror with an evocative panel of hand-painted De Gournay wallpaper.
Victoria Klein