The 2012 VIDA count of book reviews and reviewers, marking the male-female split in mainstream literary coverage over the past year, has been released, and the results are once again disappointing for those seeking a more diverse range of voices in the book world.

VIDA, which began in 2009, defines its mission as "to explore critical and cultural perceptions of writing by women through meaningful conversation and the exchange of ideas among existing and emerging literary communities." This is the third year of the count, and VIDA's reporting shows that in many cases, equality levels are getting worse.

According to a 2008 study by the National Endowment for the Arts, 58% of women read books defined as literature, compared to 41.9% of men. The popular website Goodreads also skews heavily female according to a report by Ignite Social Media.

Yet literary media continue to be dominated by male voices. Last year, we pointed out that so-called literary publishers also bear responsibility in this area, publishing far more male authors than female according to our findings.

Leading literary commentators were unsurprised by this year's VIDA count:

Disappointed, but hardly shocked, at the results of the 2012 VIDA count. http://t.co/Qqw7TPfnYu (h/t @ChatelaineBooks)

The rest of the week will be publications trying to defend/justify their choices re: gender & book coverage. How about change instead?

A selection of VIDA's findings are below. Click here to see their full count.

NB Here at The Huffington Post, we have two staff members on the books page: one female, one male. We don't commission book reviews, so are not eligible for the count. We always seek to have a diverse range of bloggers voices on our platform. If you'd like to write blogposts about books, or anything else, for The Huffington Post, you can email blogteam@huffingtonpost.com 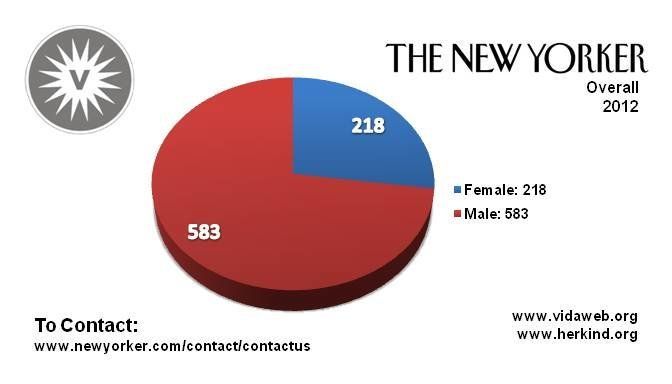