So what do you do when someone posts a YouTube video saying you're a crock? One way is to complain and get it wiped clean off the 'inter-tubes.'

A video called "Climate Crock of the Week" about head-in-the-sand global warming denier Anthony Watts was posted last week on YouTube by Peter Sinclair who has been running the "Climate Crock" series for quite sometime now.

The video was making the blogosphere rounds, getting a lot of comments on YouTube and on a post I did over the weekend here on Huffington. And then "poof" this happened: 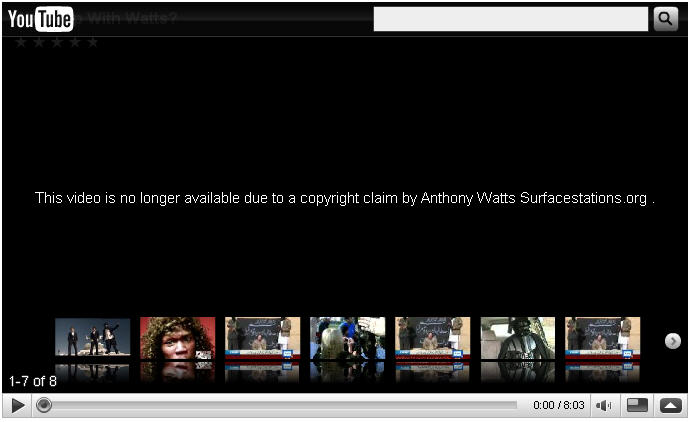 The video was removed after Watts complained under YouTube's Copyright Infringement guidelines. This has become known as a DMCA Takedown -- with the DMCA being the U.S. copyright law used to criminalize anyone infringing and/or circumventing copyrighted works.

Before I posted Sinclair's YouTube video, as I normally do with any YouTube video I post, I vetted it from a DMCA point of view and, quite frankly, I don't know what part of the video Watts would have a problem with. There's nothing I saw in the video that appears to break any copyright as it relates to Watts. Now maybe he took issue with the short (credited) clip at the beginning from Will Ferrell's Anchorman movie ... but I think this is more about a video that thoroughly shreds Watts and his argument that the world is wrong about climate change and he is right.

So what is it, Watts? Instead of hiding behind an automated service that deletes any video on YouTube that someone claims infringes DMCA, why don't you email me (desmogblog [at] gmail [dot] com) and explain why you think Sinclair's video should not be viewed by the public.