When I first read the Fox News headline "Police Draw Weapons at Snowball Fight", I immediately assumed gun-toting police officers dispersed a fight between two white-furred kittens named "Snowball". My guess: the kittens were fighting over who would keep the name "Snowball" and who would be relegated to the second most desired kitten name: "Dusty Stevens". To my satisfaction, it was a far more inane event that Fox News made far more interesting.

According to the Washington Post, the snowball fight was orchestrated by 25-year-old social media expert Yousef Ali who spread word of the event most successfully via Twitter and least successfully via shouting it into an empty coffee can. The participants gathered in a virtually empty intersection in downtown DC, dressed as their favorite characters from A Charlie Brown Christmas, rolled snow in caramel, then lobbed the delicious morsel toward opponents holding baskets full of roasted nuts. The only interruption to the fun was when a local veterinarian performed CPR on a lost fawn choking on a gumdrop. If you want to know which fawn it was, it's the only one wondering the National Mall with a renewed appreciation for life.

This is where the details get foggy if you don't have access to YouTube and the raw footage supplied by Reason.TV's Dan Hayes:

As you can see, a maroon Hummer drove into the intersection, was pelted with snowballs, and the driver became upset. In the driver's defense, the Hummer is the auto-industry's most fragile vehicle. If there's a snowstorm and you need to grab some milk, unless you want to damage your Hummer, I encourage you to strap on ski goggles and drive to the grocery store in the safety of a Power Wheels.

So it makes sense that the driver felt compelled to defend himself and his property. At this point, only one reaction matches the magnitude of the situation: stepping out of your Hummer, injecting Ebola into your nostrils, and sneezing into everyone's mouths. Instead, the driver exited his vehicle and innocently waved a loaded gun in the direction of the crowd. Only later did the crowd realize the man was actually a plainclothes officer enforcing justice - in this case, defending his Hummer against nature's greatest weapon: snowflakes.

Like I said, total snoozefest, but nothing Fox News couldn't make sing...

This is why I had a TV installed in my dog's abdomen - my fervor for watching "Fair and Balanced News" is only slightly less than my dog's constant desire to have his belly scratched. Here are four items Fox News got right...

(1) "Apparently some anti-war protestors started the snowball fight" - Though the gathering was advertised as an innocent snowball fight flash mob, Fox News knew a war protest was amidst. It makes sense: what better way to protest war than by throwing snowballs at people who agree with you.

The shrewd crowd surreptitiously tried to conceal their protest by doing the opposite: not protesting at all. Granted, there were a few imbeciles who revealed the conceit - according to the Washington Post, "a few people, witnesses said, brought an antiwar sign" - but the vast majority of the attendees knew how to keep a secret.

(2) "A plain clothes officer got involved and tried to stop the protest" - A preface here: "got involved" and "drew a loaded gun" may be used interchangeably - for example, "John Wilkes Booth got involved with Abraham Lincoln." Semantics aside, Fox News recognized who was the good guy and who was the bad guy: 'good guy' is the police officer, unaided by the authority afforded by a uniform, who tries to stop a crowd from (according to Fox News) protesting; 'bad guy' is the crowd who was (according to Fox News) protesting, a right afforded by the First Amendment. In the crowd's defense, I would also show hostility toward anyone who resembled Lando, the infamous traitor from Star Wars Episode VI: Return of the Jedi.

(3) "A uniformed officer saw the exchange and drew his weapon" - Every evening, before I blow out my bedside candle, I tell my wife that, this Christmas, I hope Santa brings me a police scanner. Sorry, but I just like listening to routine police work. So I'm glad Fox News didn't mention the man in plainclothes who waved a gun at the crowd and instead focused on the police officer who saw the ensuing chaos and drew his weapon. Police officers following protocol - that's the kind of story I can get behind.

(4) Protecting the identity of the heroic officer in question - Truth be told: if Chesley "Sully" Sullenberger had to land a passenger jet in the Hudson River all over again, once the passengers had safely deplaned, he would've jumped in the Hudson River and swam to shore, forever preserving his anonymity. Fox News knows that heroes like their privacy and that's why they included zero footage of the gun-waving police officer in question despite it being abundantly available. Even on their website news link, Fox News includes a photo of a police officer who wasn't even the subject of the story. 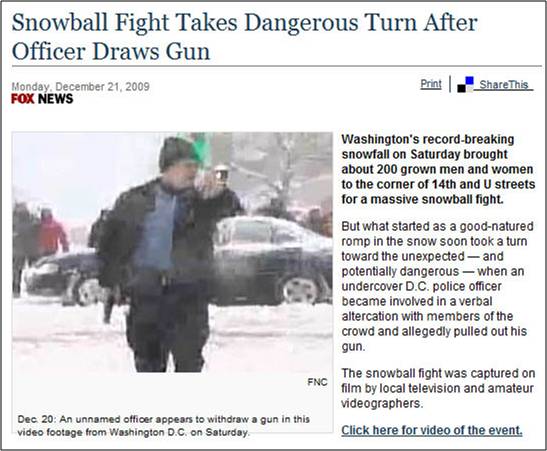 If I see this guy at a bar carrying on about how he "saved Washington DC from a snowball fight", please forgive me if I don't act impressed.

So kudos, Fox News: you realized that YouTube is hardly accessible and Twitter has a cult following at best ... and grossly distorted this story to fulfill our desire for politicized news. It goes to show that if a tree falls in the forest and hundreds of people are there to Twitter the scene and upload footage to Youtube, according to Fox News, the tree never fell.