If there's a better game than the stunning conclusion to Electronic Arts and Bioware's science fiction Mass Effect series, Mass Effect 3, I can't remember when I've played one.*

For those new to the games, the Mass Effect series is a talky sci-fi epic in the vein of Star Trek and the reimagined Battlestar Galactica. The mechanics of the games operate (with variations and tweaks along the way) as a third-person shooter for the combat sequences, and choosing between different dialogue options in the role-playing sequences.

Playing Commander Shepard in the not-that-near-future of two centuries from now, the player directly controls Shepard and is supported by two computer-controlled teammates drawn from a larger pool, as in Bioware's previous game Knights of the Old Republic.

Humanity has taken to the stars courtesy of an ancient faster-than-light device discovered on Mars. In the course of doing so, it has met up with various aliens. The series enjoys a vibrant, believable sci-fi world populated with many curiosities, all of which add to the general enjoyment and immersion in its world.

Shepard discovers the unpleasant truth that not only are the organic species of the world not alone, but the super ancient machines that share our universe play a deeper game than anyone could imagine. Every fity thousand years, these machines, the Reapers, swoop down and take the head off organic civilization by completely annihilating the dominant (i.e., potentially threatening) races of organic life.

For a while, Shepard is the only one to take the threat particularly seriously. Now, in the finale, Shepard's prophecies have come true and the Reapers have invaded. Earth has been sacked and Shepard has to lead the counter-attack.

It's compelling stuff on an epic scale, with many thoughtful small details woven into the fabric.

One consequence of all this epic-ness, is that role-playing elements have essentially been reduced to a glorified choose your own adventure, with fewer meaningful choices than players of Bioware's previous games would like. The storyline here is set: you're going to save the galaxy or die trying.

Gameplay is satisfying. Not as visceral or immediate as the Gears of War series, say, Mass Effect 3's combat is still adrenaline-pumping. 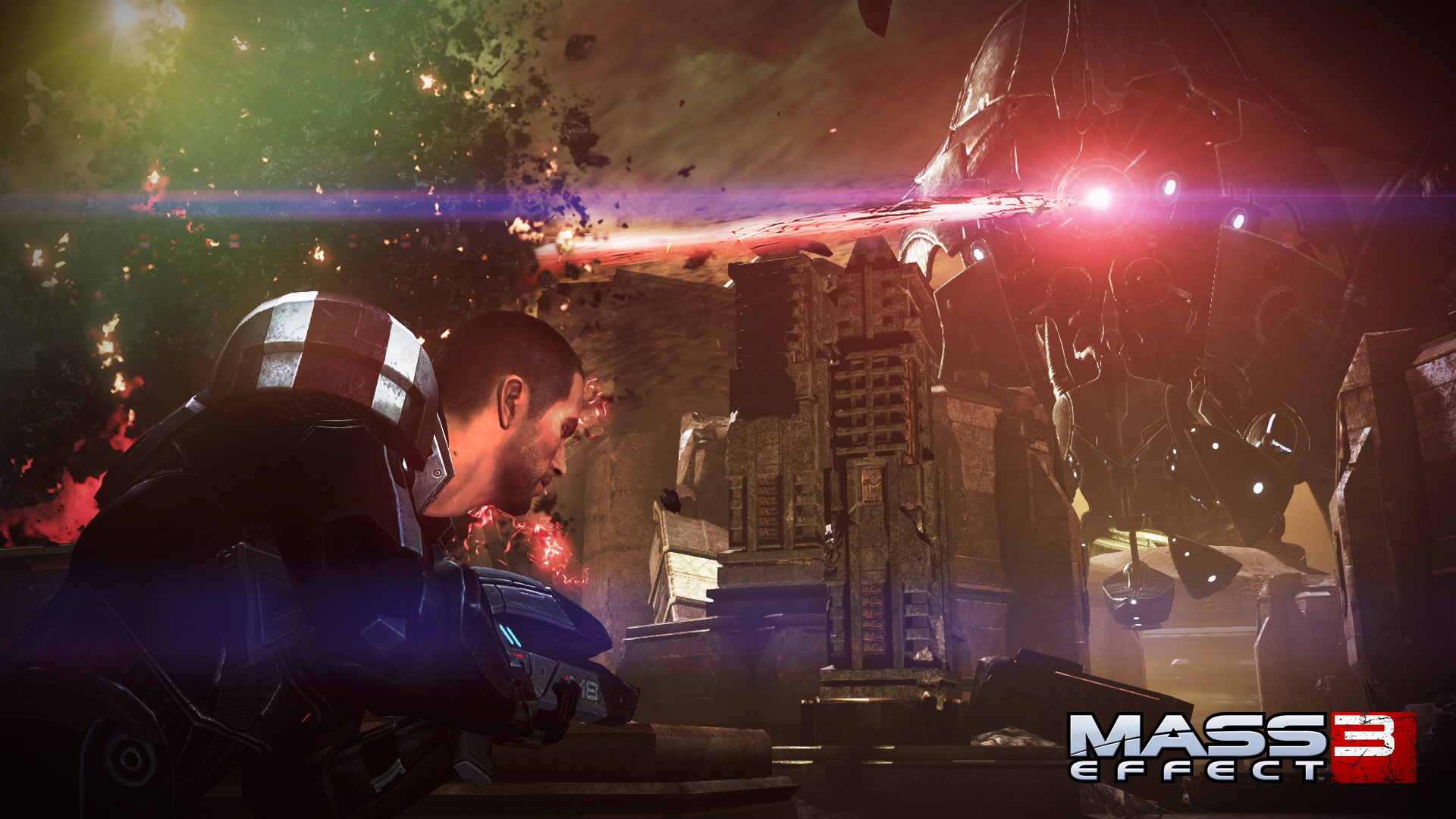 Shepard faces off against a Reaper.

The repetitive nature of the enemies is annoying, however. One antagonist human faction appears to be shoehorned into every encounter, one suspects less for plot reasons and more because it is simpler to use the same models over and over. Disappointing for a title of this caliber.

One vestige of role-playing games that Mass Effect 3 keeps is the silly money system. After each successful mission, you receive a whopping 12000 credits or so from the Alliance. It would be more realistic for Shepard to be given practically unlimited resources, but to do so would break one of the central acquisition dynamics of role-playing games.

Compounding the error, one of Shepard's subordinates observes that they indeed have practically unlimited resources thrown at them. The player can keep that in mind while scraping together enough cash for a better assault rifle.

Players of previous Mass Effect games may be disappointed by the limited nature of prior characters' cameos. Yet many of them are at least given interesting appearances, and, in fact, each of the ones I've experienced so far rise to the level of an emotionally compelling experience. It's not as easy as it looks to accomplish that with everything else this game needs to do. 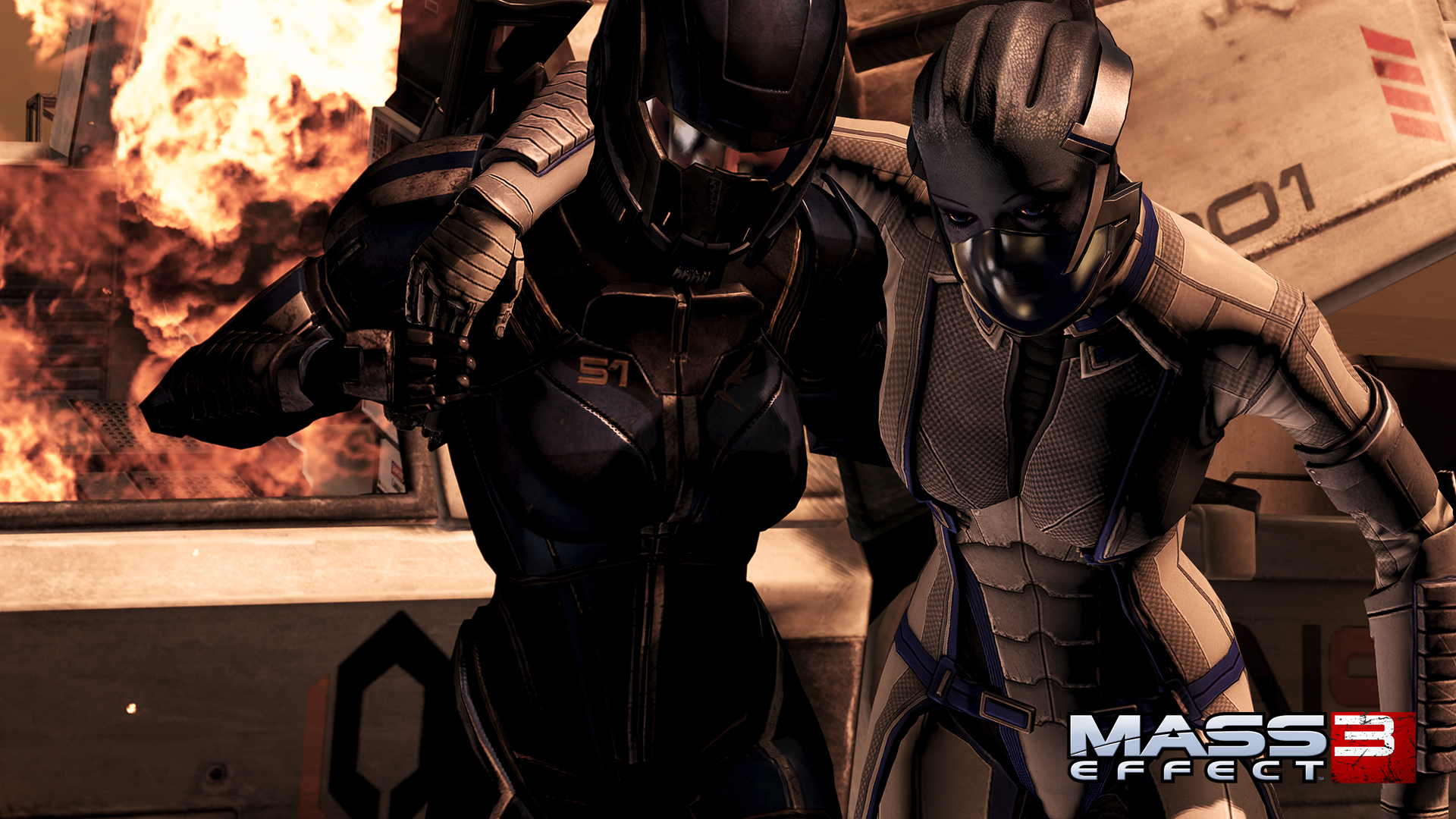 Multiplayer, greeted with suspicion by fans of the series, turns out to be loads of fun. You join up with up to three other players to fight waves of enemies as in Gears of War's Horde mode. By doing so, you gain "Galactic Readiness" in the main game for your final push against the Reapers.

Mass Effect 3 combines flawless mechanics with story telling that succeeds in creating an emotional connection to its characters. When the final credits rolled, I was sad to leave Shepard's world behind.

Disclosure: Recent FTC regulations imply that I should disclose that the game manufacturer provided me with a complimentary review copy of this game.

*Is it perfect? It's awfully close. Among its few flaws is a somewhat perfunctory ending that is already drawing criticism from disgruntled fans. Those fans wanted closure along the lines of Return of the Jedi and got the fourth season of Battlestar Galactica instead. In response to the criticism, I delayed writing my review to experience the conclusion. I understand the outrage, but consider it to simply reflect how emotionally engaging an adventure Mass Effect is. The debate is over the game as literature and not as game, and even so the ending presents thought-provoking science fiction questions.