A video recently posted by tourists in Nevada shows a family being held at gunpoint after crossing the warning signs at Area 51. Guards quickly swooped in, seconds after they drove onto the grounds of the high security base.

For many years, people thought the existence of a secret government base called Area 51 was a fairy tale told by UFO and alien conspiracy theorists. However, a family found out last summer that discovering just how real, and how secure, the base is can be as easy as driving a few yards past warning signs telling people to keep out. 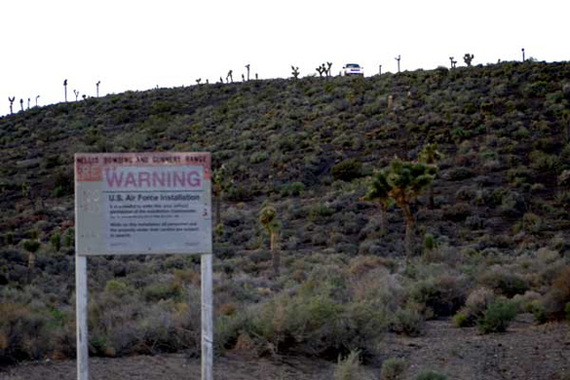 Warning sign at the Area 51 back entrance. (Credit: Alejandro Rojas)

The video (seen below) was posted on March 15, 2016 by Jeremiah Hasvold. The purpose of the video was to record a trip to Nevada by Hasvold and his son in July of 2015. One of the places where they stopped was the Area 51 gate. In the video, Hasvold and his son also visit the Extraterrestrial Highway and the "black box."

A stretch of Nevada highway 375 near Area 51 was renamed the "Extraterrestrial Highway" due to rumors of alien spacecraft being tested at Area 51, where the government now admits is the home to top secret aircraft development. For years, the base was unacknowledged until 2013, when its existence was declassified in a CIA document.

Along the Extraterrestrial Highway are a couple of roads that lead to gates into the base. A landmark for one of these roads was, it has since been removed, a white mailbox, often referred to as "the black box." Once you get about 20 miles from the base, there are signs warning visitors from proceeding any further. On the hills behind these signs, security guards in trucks watch closely.

In 2013, I served as a tour guide and UFO expert for a visit to Area 51 with the Kardashian and Jenner families on "Keeping Up With The Kardashians." I stressed the importance of not passing the signs, and they got the picture.

Hasvold's video inspired me to post a couple of Vine videos from the show, and you can see them here. In the first, my friend, Travis Walton, and I instruct them to look for the signs.

Walton was along for the ride because I was asked to bring along someone who had a remarkable UFO related encounter. Walton is a very credible witness who saw a UFO with some of his coworkers and then disappeared for several days. A movie called "Fire in the Sky" starring D.B. Sweeney, Robert Patrick and James Garner based off of his encounter was made in 1993

In the second Vine clip, I point out the guards and the signs as Caitlyn (then Bruce) Jenner, who was driving, gives us all a scare by pretending not to stop.

The Kardashian/Jenner clan were much brighter than the tourists in the Hasvold video. And yes, I found the Kardashians and Jenners to be very intelligent and nice!

In Hasvold's video, he and his son stop at the entrance to a road into Area 51 where the black box used to reside. As Hasvold mentions in the video, the box has been removed. However, tourists still stop there.

While Hasvold stops at the signs that warn people to go no further, the other group decide to continue. Hasvold videotapes what happens next.

The family that keeps going is stopped by a truck only seconds after they pass the signs. Two guards come out of the truck, one apparently holding a camera, the other a gun. They appear to instruct the passengers of the vehicle to exit the car with their hands raised. The driver is then asked to approach the guards, keeping his hands raised, walking backward toward the guards.

The video ends there and Hasvold does not provide any more information as to who the tourists were or what happened to them. In the past, visitors to the gate who have passed the signs have been fined and/or arrested. In 2014, a tour van accidentally crossed the line and faced steep fines and misdemeanor convictions.

Trips to the gates of Area 51 are fun, and a mecca for UFO enthusiasts, but if you do make the trip, for goodness' sake, heed Kendal Jenner's warnings, and do not pass the signs!

A version of this blog post first appeared on OpenMinds.tv.