Thousands of people crowded the sidewalks of Charlotte on the last night of the Democratic National Convention. Originally scheduled for the Bank of America Stadium, which holds 73,000 people, President Barack Obama's speech was moved indoors to the Time Warner Arena, a much smaller venue. The official reason for moving the venue was projected rainy weather, which had plagued the convention off and on all week.

Pundits are reporting that the venue was changed because Democrats could not fill the stadium, but hundreds-- if not thousands-- of people milled about on Charlotte's sidewalks or watched speeches at the outdoor MSNBC stage or inside bars, restaurants, and the convention center. 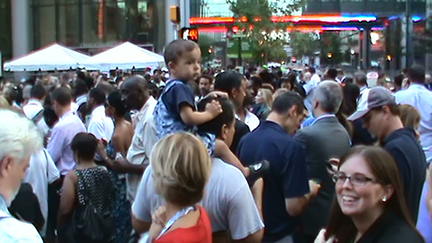 The street scene was carnival-like with dozens of vendors selling t-shirts, buttons, American flags, programs, and other Obama memorabilia. Although thousands of disappointed but amicable Obama fans, plus police, pedicabs, and a handful of protesters filled the area outside of the arena, the aura was peaceful and friendly, as it had been all week.