By Raymond Braun and Aaron Rhodes.

Have you heard of HERO, the Houston Equal Rights Ordinance? If you're part of the LGBTQ community -- or anyone who believes that everyone deserves equal rights -- then you should know what's at stake in Texas this week.

Last year, the Houston City Council passed HERO as a means to level the playing field by protecting Houstonians from discrimination in employment, housing and public spaces like restaurants. It's surprising to think that before this ordinance was passed, Houstonians had no local tool to address discrimination against people who are LGBTQ -- but it's true.

A few weeks ago, we flew to Houston, Texas to vlog all about the Houston Equal Rights Ordinance and why it's so critically needed to ensure that a broad range of hardworking Houstonians -- regardless of sex, race, color, ethnicity, national origin, age, familial status, marital status, military status, religion, disability, sexual orientation, genetic information, gender identity and pregnancy -- have the opportunity to earn a living, take care of their families, find housing and be served by businesses and government, without fear of discrimination. We traveled around Houston talking to volunteers and voters -- and had some fun checking out local highlights in the process. 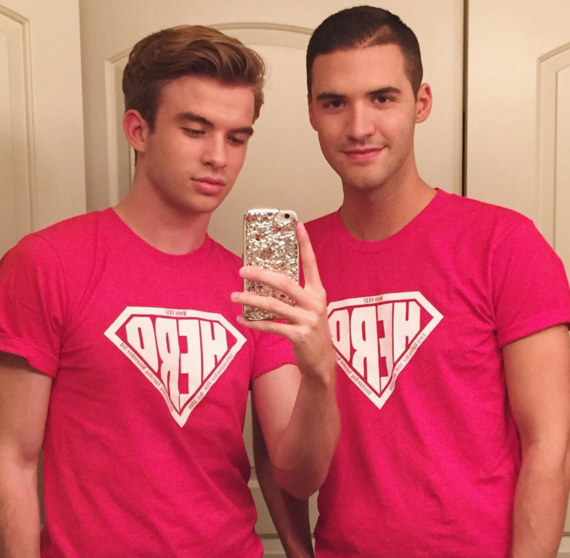 One of the things we love most about social media is the platform it offers to share ideas, build community and connect with others around the world. Through our YouTube channels, we strive to raise awareness about important issues and historic milestones, from the United States Supreme Court decision on marriage equality to the Ireland marriage referendum vote.

Neither of us are from Texas, so why is this issue so important to us? We believe that everyone has the right to reach their highest potential and live their lives free of discrimination. As members of the LGBTQ community, we want to support those in our community who do not have equal rights, whether in Houston or around the world. Houston is the fourth largest city in the United States (soon to become the third, by many accounts) and is considered a bellwether city for politics across the United States. Houston has an historic opportunity to set an example as a world class, cosmopolitan hub that celebrates diversity and supports all of its residents. If HERO passes, it sets yet another example that our country is continuing its momentous evolution towards equality for all. If it doesn't pass, it could embolden people who are trying to roll back LGBTQ equality around the country. Even worse, it sends a message to every LGBTQ kid in Houston that they are still second-class citizens and not regarded as equal under the law. We can't stand for that.

When we were in Houston, we were moved by the diverse stories and perspectives we heard. One volunteer talked about how she got involved with the campaign because her dad was fired for being gay, and another couple talked about how they spent their anniversary phone banking because they want their young son to grow up in a city where all Houstonians are protected and valued.

The people we met in Houston inspired us to continue advocating and using our voices to raise awareness. They were resilient, open minded, kind, hard working, good people -- and the thought that they might wake up on Wednesday in a city that doesn't regard them as equal is troubling and simply unacceptable.

Check out our Houston vlog, share it with your friends; and if you're in Houston, be a hero and vote for HERO!

For three years, Raymond Braun led LGBT marketing and partnerships for YouTube, a role that he originated and that landed him on the Forbes "30 Under 30" list, iMedia top 25 Marketing Leaders and Innovators and Men's Health "Gay Celebrities Roundtable." In September 2015, he left his role at YouTube to start his own company, RWB Media, focused on LGBT marketing and community engagement. Keep in touch with Raymond on social media: @raymondbraun.

Aaron Rhodes (of The Rhodes Bros) is a YouTuber, LGBT activist, model and actor in the hit TV series Scream Queens. He rose to fame when his YouTube video, Twins Come Out To Dad, went viral, receiving more than 20 million views, landing him and his brother Austin on The Ellen DeGeneres Show and becoming the most viewed coming out video on YouTube.