Austria has a long history of elaborate and even beautiful public housing projects. The legacy stretches back to the days of "Red Vienna" in the early 20th century, when the socialist government in power took a special interest in designing for the general public. In the decades to come, renowned architects like Adolf Loos, Margarete Schutte Lihotzky and Josef Hoffman joined the cause, creating towering architectural marvels that prove public housing design could be an art form like any other.

In celebration of the Viennese phenomenon, New York's Austrian Cultural Forum is paying homage to the city's love affair with public, subsidized housing in a new exhibit titled "The Vienna Model." Consisting of 37 separate case studies of architecture, urban habitation and community revitalization, the exhibit showcases the work of European designers who made Vienna a home for their innovative yet affordable designs. 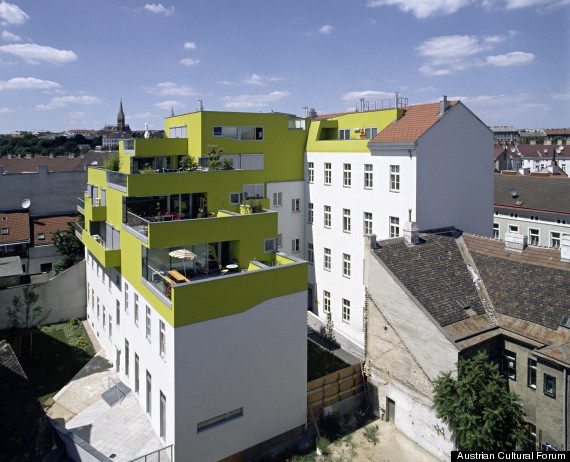 The studies on view show a far-reaching range of residential architecture, displaying drastically different sizes, shapes and arrangements. Take the Alt Erlaa project (pictured at the top of this post) built in 1976, for example. The towering complexes stretch for over two million square feet, so big that the structures earned their own subway station. Visually, the behemoth estate looks like a cluster of futuristic high rises, yet nestled in a particularly green corner of southern Vienna, Alt Erlaa sleek aesthetic manages to blend in with patterns of its surrounding oasis.

On the other end of the spectrum, a housing project called Sperrgasse17 (pictured above) represents the smaller side of Vienna's public housing endeavors. Home to only 21 individual units, the 2004 building is a brightly colored, multi-level residence that stands out amongst the nearby 19th century architecture. Transformed from an old administrative building, Sperr17 offers quaint subsidized rentals, each accompanied by its very own terrace overlooking the city.

While Alt Erlaa and Sperr17 function much like the "affordable" housing options in the US, the architectural quality of the buildings is far superior to the public residences of other Western countries. Vienna's unique public housing adventures have proved effective since the projects began to spring up over a century ago, with about 60% of the Viennese population living in municipally built, owned or managed housing (compared to the 70-85% of New Yorkers who live in privately owned residences). On top of that, the Austrian capital earned second place in the Economist's "World's Most Livable City" survey from last year, an accolade only surpassed by the city's number one ranking on the Mercer "Quality of Living" list for the past four years.

Of course, the country has other aspects to thank for its astounding statistics -- such as historically low crime rates, affordable education options, and reliable public transportation. Scroll through the slideshow below for sneak peek of "The Vienna Model", on view at the Austrian Cultural Forum April 17 - September 2, 2013. What do you think readers? Can the Viennese public housing model be replicated in a city near you?