PERTH, Australia -- On July 12th the Permanent Court of Arbitration in the Hague ruled in favor of the Philippines in its case against China in the South China Sea. The world watched and commented, even as China declared the finding void. But somehow Vietnam, the one nation that, after the Phillipines, could have cheered the loudest has stayed subdued. Why?

Territorial disputes between Vietnam and China have long driven naval standoffs, the capture of fishermen, the cutting of survey ships' cables, violations of sovereignty, widespread domestic unrest and anger at the government, riots and lootings and a strong upgrade of Vietnam's naval material.

When the ruling came out on the South China Sea, Bill Hayton at The National Interest commented that, "it is a victory for evidence over sentiment." Hayton said that the claims of China have been driven by emotion based on historical events and treatment going back to the 19th century. "Those misunderstandings and emotions will not easily go away," he wrote. 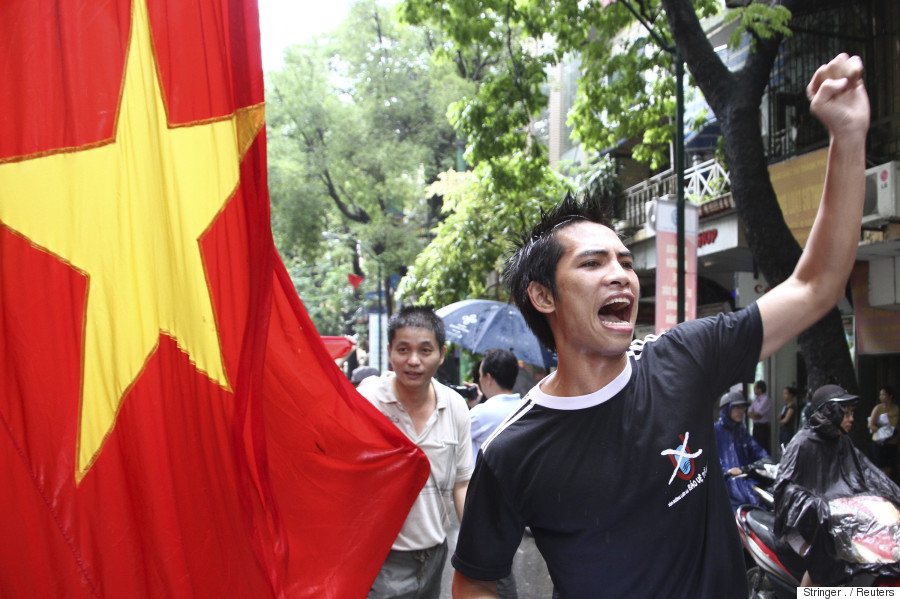 For Vietnam, this is a strategic and an emotional victory, but not an unqualified one. The attitude in Vietnam over territorial claims is as strong as in China, and similar to Hayton's reading of China, public sentiment is fueled by a strong sense of grievance, both over direct issues of sovereignty and China's calculated provocations, along with a feeling of historical grievance against China for 1,000 years of occupation.

Vietnam, however, reacted far stronger to supposed violations of sovereignty when China landed civilian aircraft on airstrips on two reefs, Subi and Mischief, in defiance of the ruling -- rather than to the ruling itself.

Conversely, the immediate reaction from Vietnam to the international tribunal ruling was less strident and more balanced. Binh said:

In this spirit, Vietnam strongly supports the resolution of disputes in the East Vietnam Sea through peaceful measures, including diplomatic and legal procedures, without using or threatening to use violence, in accordance with international law, including the 1982 UNCLOS.

According to the website Vietnam Right Now, a source known for views very different to the government's in the country, "The statement reflect[s] Hanoi's concern at the possibility of an aggressive backlash from an aggrieved China, as it seeks to compensate for a major legal and diplomatic blow to its territorial claims."

In the case of the South China Sea, China had been thwarted by a smaller power, and The Hague ruling should have set Vietnam's propaganda departments and its newspapers into nationalist frenzy. Instead, things stayed quiet to begin with, and media quoted the MOFA spokesman or simply reported the outcome. There was no fanning of nationalist sentiment.

For Vietnam, this is a strategic and an emotional victory, but not an unqualified one.

Surely, it was almost a victory for Vietnam also -- no one has supported the Philippines through this battle more than Vietnam. Yet the reaction from its Ministry of Foreign Affairs and newspapers has been diligent, but uninspired.

The Vietnamese government is always under pressure to "stand up" to China, both from activists and the wider and the more apolitical public. This has happened a succession of times since 2011 when Chinese aggression in the region started to grow. Typically activists would march around Hanoi's central Hoan Kiem Lake each Sunday morning, often beginning at the Chinese embassy, while being assiduously filmed by security services. This was allowed so as to "send a message" to Beijing, before protests were inevitably shut down after a few weeks.

Blaming the government for not doing more is a good beginning grievance upon which to build, but not one to end on. The government knows this and so remains leery of allowing too much anti-China sentiment as it works to strengthen relations with the country. Crackdowns on protests are inevitable.

China and Vietnam have been trying to revamp ties since 2015 when Chinese President Xi Jinping visited Vietnam. Xi spoke at the Vietnamese National Assembly, and was the first foreigner to do so. The visit was widely hailed as a "reset" in the relationship of the two nations, and resulted in 12 bilateral agreements and over $150 million in Chinese investment promised to schools and hospitals in Vietnam, with an additional half billion for infrastructure. 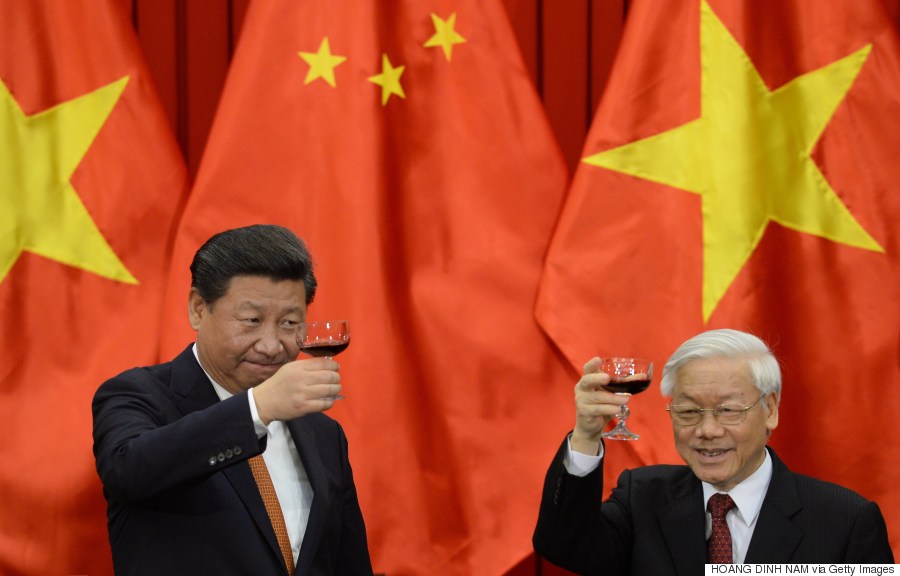 Ties between the two countries had cooled -- to put it mildly -- in 2014 after China moved its oil rig into Vietnam's Exclusive Economic Zone. The move set off protests across the country that resulted in the trashing of what turned out to be Taiwanese factories and deaths.

Though Vietnam has moved closer to the U.S., managing its relationship with China still matters. Since Vietnam and China share a border, immense trade and an ideology, there will always be an element of business-as-usual to Hanoi-Beijing ties behind the scenes, even as anger rages over the sovereignty claims in the South China Sea. The shared border means their security forces collaborate on some trainings and the nations watch each other carefully for signs of democratic foment or unrest.

But both nations also fully claim the Islands of Spratly and Paracel in the South China Sea (also called Hoang Sa and Truong Sa in Vietnam), while the other four claimants in the Philippines, Malaysia, Brunei and Taiwan all have partial claims, which certainly makes relations a little more difficult.

What happens next in the South China Sea won't change: it's still up to China.

At this juncture the best bet is the Association of Southeast Asian Nations, or ASEAN. The "paper tiger" hasn't been the answer yet, but Hanoi hopes it might still be, despite Cambodia's intransigence to the group.

Professor Carl Thayer, a former Southeast Asia regional specialist at numerous Australian defense education institutions, expected that, "Vietnam will focus its attention on getting some form of unity in ASEAN particularly as it will be chairing a ministerial meeting later in the year. Vietnam wants to advance its interests through ASEAN."

Vietnam will find this effort difficult, as, "The disparate group of countries that have been threatened or dismayed by China's expansionist claims have found it hard to form up a united front," David Brown and Huy Duong wrote in the Asia Sentinel.

This statement has reigned true to the point that Cambodian Prime Minister Hun Sen even went so far as to say he would oppose any ASEAN statement supporting The Hague's recent ruling. 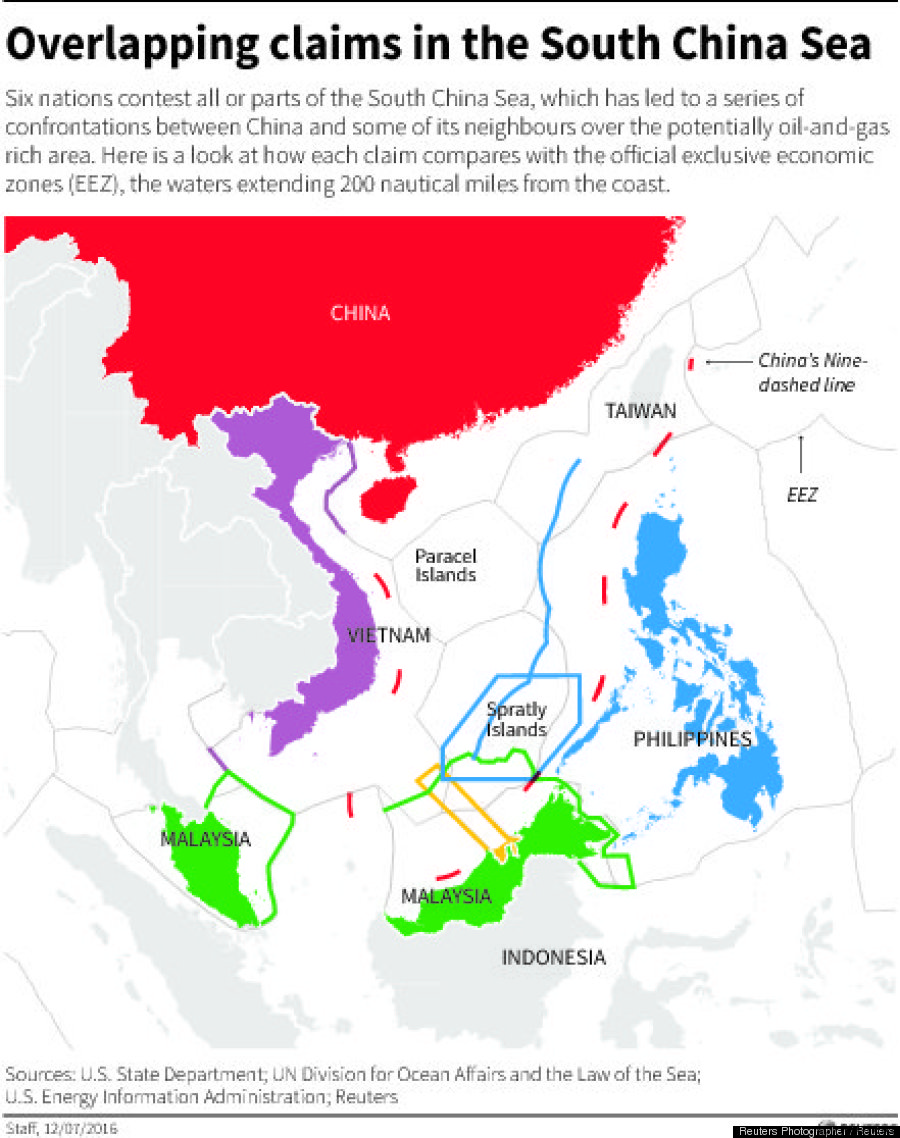 Map showing the overlapping claims by country on the South China Sea. (Reuters/RM)

Indonesia and Singapore, however, have expressed displeasure with China's recent actions, with Indonesia going so far as to arrest Chinese fishermen in late May of this year. Chinese aggression has increasingly irritated Indonesia. After the ruling, the country published its own defense plan and strengthened security around its South China Sea islands.

As more countries become frustrated with Chinese aggression and claim to islands in the South China Sea, the U.S. has begun to push each nation to resolve the issue through international communication, and follow international rulings, rather than make security moves or power plays.

"In the future, we encourage other South China Sea claimants, including Vietnam, to seek similar resolution of maritime disputes through arbitration as well as by negotiation among the parties," U.S. Sens. John McCain (R-Ariz.) (who has long argued for lifting the embargo on weapons sales to Vietnam) and Dan Sullivan (R-Alaska) said in a joint statement.

At this point arbitration may not be an option, but for the meantime what happens next in the South China Sea won't change: it's still up to China.