As we settle into year three of the 13-year Commemoration of the 50th anniversary of the Vietnam War, which extends from May 28, 2012 to November 11, 2025, Americans from sea to shining sea are joining in events that "recognize the Vietnam Veterans and their families' service, valor, and sacrifice," according to the official Vietnam War Commemoration website. As with any program dreamed up by bureaucrats, objectives are a must, lest the organizers and participants lack focus and taxpayer dollars be wasted.

What follows is a point-counterpoint response to the five congressionally-mandated objectives for the commemoration of the 50th anniversary of the Vietnam War, a hollow payback for a generation of neglect and mistreatment of so many Vietnam veterans and a lame attempt to salvage honor where none exists.

1. To thank and honor veterans of the Vietnam War, including personnel who were held as prisoners of war (POW), or listed as missing in action (MIA), for their service and sacrifice on behalf of the United States and to thank and honor the families of these veterans.

Thank and honor them for doing what, to whom, by what means and to what ends? I'm reminded of the words of Camillo Mac Bica, a professor of philosophy at the School of Visual Arts in New York City and Vietnam veteran, who wrote in a 2012 essay: "I do not want to appear disrespectful or ungrateful, but should we meet on the street one day, do say 'Hello,' or 'Fine day' or other such nicety, but please do not thank me for 'my service' as a United States Marine. I make this request because my service, as you refer to it, was basically either to train to become a killer or to actually kill people and blow shit up." 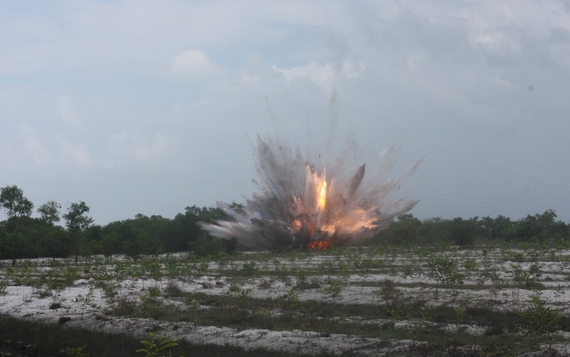 Instead of yet another patronizing round of "thank you for your service", why not condemn the political leaders of the day who lied to their citizens and the rest of the world, whose actions resulted in the death and injury of millions of Vietnamese and others in Southeast Asia and who sent tens of thousands of young Americans to die in vain?

Why not call upon present-day U.S. political leaders to issue a heartfelt apology to the Socialist Republic of Vietnam, the Vietnamese people, families of soldiers who perished, and U.S. veterans and others whose lives (and families' lives) were altered, diminished and damaged in oh so many ways?

Why not make good on President Nixon's broken promise, contained in a February 1, 1973 letter to the Prime Minister of the former Democratic Republic of Vietnam, Pham Van Dong, to provide funds for "postwar reconstruction" in the range of $3.25 billion, adjusted for inflation? Just a fraction of that amount would provide treatment, care and support for ALL of the victims of war legacies, as well as create a human needs infrastructure (e.g., health care system) whose development has been retarded due in part to a lack of resources caused by the war and one of its insidious by-products, poverty.

As far as POWs are concerned, it baffles me that people like John McCain inhabit America's pantheon of heroes. They were in the wrong place at the wrong time, where they had no right to be in the first place. Then there are the true heroes, former POWs who opposed the war such as Bob Chenoweth, a former US Army staff sergeant captured in 1968. Chenoweth had this to say five years after his release: "Most of the POWs celebrate the day they were released. But I celebrate the day I was captured. It was a red-letter day for me, the day I began understanding another race."

May the remaining MIAs, all 253 of them in Vietnam, according to the Joint POW/MIA Accounting Command, or JPAC, rest in peace and may their families be at peace. (By obscene and tragic contrast, Vietnam has an estimated 300,000 MIAs.) It's time to retire that tired old black and white flag that flies above thousands of government buildings, silhouette of a man's bowed head, watchtower, barbed wire and all. JPAC's annual budget of $100 million is better spent on the living, including the survivors and victims of war legacies such as Agent Orange and Unexploded Ordnance (UXO). 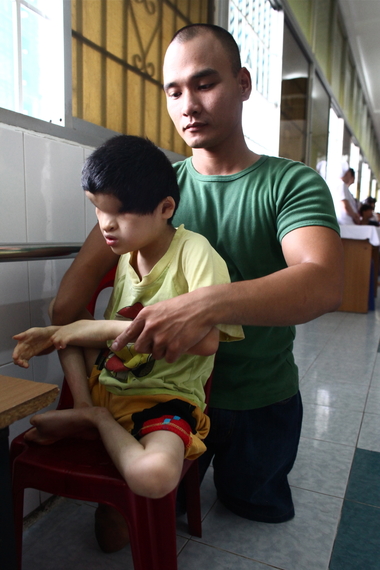 Nguyen Hong Loi, 24, cares for a child born without eyes in the Agent Orange children's ward of Tu Du Hospital in Ho Chi Minh City, Vietnam. About 500 of the 60,000 children delivered each year at the maternity hospital, Vietnam's largest, are born with deformities, some because of Agent Orange, according to doctors. May 1, 2013.

To invoke the notion of service in the context of the American War in Vietnam makes a complete mockery of the word. Nick Turse's best-selling book, Kill Anything That Moves: The Real American War in Vietnam, which meticulously documents the widespread abuse, torture, and murder of Vietnamese civilians in pursuit of a "kill anything that moves" policy that emphasized body counts as a metric for progress, comes to mind. Service indeed.

3.To pay tribute to the contributions made on the home front by the people of the United States during the Vietnam War.

Whose contributions? Those of Nixon's "silent majority"? Those of U.S. intelligence agencies that spied on anti-war protesters (e.g., the FBI through COINTELPRO)? What about the contributions of the anti-war movement, whose efforts hastened the end of the war? What about the courage of Dr. Martin Luther King, Jr., who chose to break his betrayal of silence and had this to say in his first public antiwar speech, Beyond Vietnam, in New York City on April 4, 1967, exactly one year before his assassination: "Surely this madness must cease... I speak as a child of God and brother to the suffering poor of Vietnam. I speak for those whose land is being laid waste, whose homes are being destroyed, whose culture is being subverted... I speak as a citizen of the world, for the world as it stands aghast at the path we have taken." What about the integrity of those who chose not to "serve"? What about the service of conscientious objectors like Doug Hostetter, who was a Mennonite Central Committee worker in central Vietnam from 1966-1969? What about the impact of those returning anti-war veterans, including the current secretary of state, John Kerry's April 1971 testimony before the U.S. Senate Foreign Relations Committee, and others who testified in the January-February 1971 Winter Soldier Investigation, an inquiry into U.S. war crimes?

4.To highlight the advances in technology, science, and medicine related to military research conducted during the Vietnam War.

Which "advances" would those be? Studies of the short- and long-term health effects of Agent Orange exposure? How to save grievously wounded soldiers who would have otherwise perished on the battlefield as preparation for future imperial misadventures also based on lies (e.g., Iraq)? Vietnam as a fantasy lab for the use of bombs, cluster munitions, mines, and grenades? The introduction of new torture techniques and the refinement of existing ones? This objective is reminiscent of "the advances in technology, science and medicine related to military research" conducted by the Third Reich. It exemplifies that famous American can-do spirit at its most perverse - fumbling for a silver lining in moral pitch blackness.

5.To recognize the contributions and sacrifices made by the allies of the United States during the Vietnam War.

"Contributions and sacrifices" - all for naught and at heartbreaking cost, mostly to the Vietnamese, but also to a generation of foreign and U.S. veterans and their families, who have paid the price in shattered and, in many cases, prematurely ended lives, including the multigenerational effects of Agent Orange, PTSD, divorce, drug abuse, incarceration, homelessness, suicide. What about the war crimes committed by some of those allied forces, including Australians and South Koreans?

The good news is that while most of America continues to indulge in this national charade, and refuses to come to terms with its bloody past and prevent the "past" from becoming "prologue" again and again, the tiny S-shaped country upon which the U.S. military visited so much death and destruction has emerged as one of the great success stories of the developing world, a major player in Southeast Asia and a valued partner of the U.S. Against incalculable odds, including a cruel and devastating U.S.-led economic embargo that ended only 20 years ago this month, Vietnam has prevailed. Best of all, Vietnam belongs to the Vietnamese.

When asked if she feels hatred towards the U.S., a woman who lived through the 1972 "Christmas Bombing" of Hanoi replied "No. You never forget what happened, but you can't move forward if you're always looking back." As the victimizers, Americans and their political leaders need to look back before they can move forward.