Whether it's served hot or iced, coffee will come with sweetened condensed milk in Vietnam almost without exception. If you don't specify, your coffee will come with a layer of the good stuff in the bottom of the mug or glass, and if you ask for coffee with milk, you'll get the sweetened condensed kind -- not "fresh milk," as it's labeled in some places. If you ask for coffee without milk, you may get some stares, and you'll probably end up with black coffee mixed with a ton of sugar. The coffee is so strong and bitter, a lot of Vietnamese people will think you're nuts for drinking it straight.

There's so much more to Vietnamese coffee, however, than the obligatory addition of sweetened condensed milk. While many people might not expect it, coffee is a huge part of daily life. Vietnam is the second-largest coffee producer in the world. The French brought coffee to Vietnam in the 19th century, and after the Vietnam War, the government instituted a massive coffee production program. By the 1990s the country's coffee production started to take off and today Vietnam is producing 1.73 million tons a year.

You can find Vietnamese people drinking coffee morning, noon and night, at proper cafes or on little plastic stools on the street. Cafes -- be they sit-down, indoor establishments or more casual street-side stalls where servers are constantly unstacking stools for people to sit on and then stacking them back up to make room on the sidewalk -- are gathering places for people of all ages. 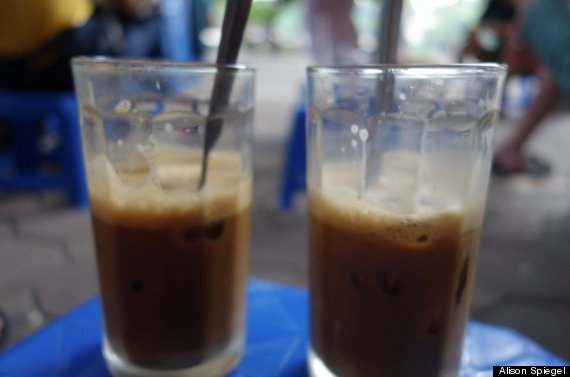 Coffee is traditionally brewed in individual portions using a phin, which consists of a small cup, a filter chamber and a lid that also functions as somewhere to catch dripping coffee. If the coffee is served this way, it forces you to slow down and savor the experience. You literally watch the coffee being made drip by drip, which not only stokes your desire, but it also forces you to sit for a few minutes while the coffee gets made. Of course not all coffee is served this way and you can also find fast cafes where the coffee has already been brewed and is ready for you to drink right away or take on-the-go. The classic slow drip method, however, is a real treat and reminder to slow down, which is especially welcome in the all-encompassing hustle and bustle you'll find in Vietnamese cities.

If you think the traditional phin looks small, you're right. You won't find venti-sized portions in Vietnam. Because the coffee is so strong, you don't need a lot; four ounces might be plenty. Like the slow drip, small and strong portions also encourage slow drinking, and when the coffee is good, you'll want to make it last. 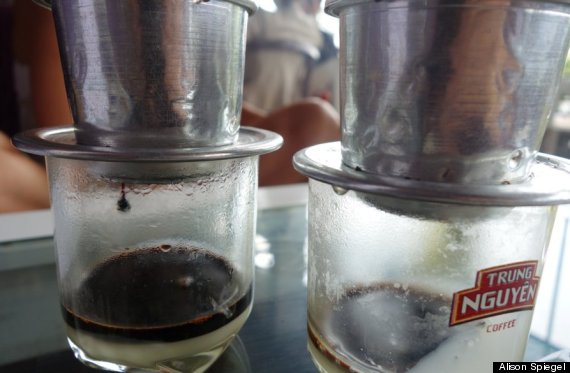 One coffee delicacy in Vietnam is ca phe chon, which is coffee that has been made from beans that have been eaten and partially digested by civets, weasel-like animals native to Asia and Africa. Yes, the coffee beans come out in the civets' poop. Also produced in Indonesia, civet coffee is so tasty because the animals choose the best coffee berries to eat. According to The Economist, "With their long noses, they sniff out and eat the best and fleshiest beans." The result is a rich, dark and smooth cup of coffee that can go for a pretty penny -- up to $30 a cup around the world, the Economist reports. In Hanoi, you can score a cup for closer to $3, which, while high for a regular cup of coffee in Vietnam, is less than the international markup.

Not all coffee comes from civet sh*t, however. Most of the coffee beans grown in Vietnam are robusta beans, which have a strong taste and are relatively easy to grow, compared to arabica beans. Vietnam is the largest exporter of robusta beans around the world. According to Vietnam Briefing, most robusta beans are used for instant coffee and specialty drinks, which abound in Vietnam. 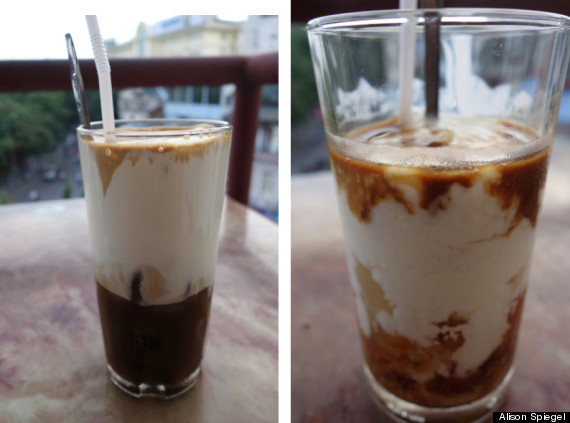 If that sounds like a little too much to handle, you might want to start with an egg white coffee, which is simply whipped egg whites stirred into your coffee. Sweet meringue may be a better starting place for the uninitiated. Once you've gotten used to eggs in your coffee, you can try yogurt. Dollops of yogurt in hot or cold coffee is another specialty drink you can find in Vietnam, and it's better than it sounds -- especially if you've got a view of Hanoi's famous Hoan Kiem Lake from the rooftop speakeasy-esque Cafe Pho Co coffee shop that you access through a silk shop. While sweetened condensed milk may still be our favorite aspect of Vietnamese coffee, there are so many ways to enjoy a cup of Vietnamese Joe.