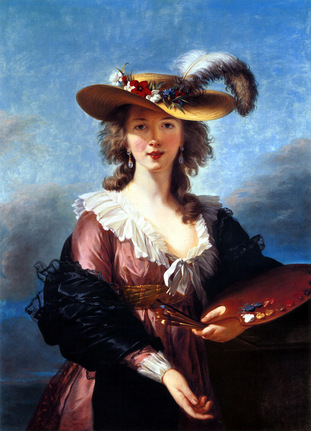 Vigée Le Brun: Woman Artist in Revolutionary France, an exhibition now at the Metropolitan Museum of Art is a long-overdue retrospective of the artist known as France's last great portraitist, Louise Elisabeth Vigée Le Brun enjoyed the patronage of powerful women during a turbulent era. The exhibition presents 79 of the artist's portraits; a veritable Who's Who of Europe's women of the era (plus some men in very spiffy costumes as well).

Vigée Le Brun and her most important French female patron, Marie Antoinette, were both born in 1755. The selection of portraits and self portraits in the exhibition provides the visitor with a visual record of the changing values and attitude towards women at the end of the 18th century, as well as the changing circumstances of the artist's own life.

Two portraits of Marie Antoinette painted in 1783, when Vigée Le Brun and the Queen were both 28 years old, are presented side by side in the exhibition. Marie Antoinette in a Chemise shows the monarch in pastoral costume holding a pink cabbage rose, her signature flower, at the peak of its bloom. Vigée Le Brun displayed this portrait at her first Salon, when she was admitted to the Académie royale de peinture et de sculpture after pressure from Marie Antoinette and Louis XVI. It was violently condemned as inappropriate for a public portrayal of royalty. This was the sort of costume that Marie Antoinette enjoyed at the Petit Trianon, built for informal moments at Versailles away from the demands of court life and court dress with its tight corsets and wide panniers. 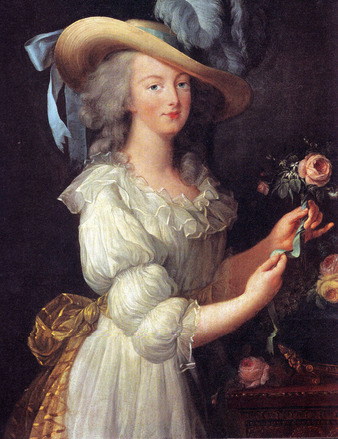 The portrait was promptly removed, and replaced by a new, more formal portrait of the Queen deemed more fitting by the Salon. Same pose, same rose, same sitter....but a change of dress. In place of the shocking pastoral gown is a pastoral setting for the Queen herself. She stands beside a rose bush from which she has gathered a bouquet of buds that surround a large, central bloom. A tree trunk seems to grow directly from the slate gray satin covering the wide, formal panniers of her lace-trimmed skirt. Tree branches, heavy with green leaves, back up the pouf hairstyle making her seem to be a sort of human manifestation of the garden that is France. Perfect for the Salon. 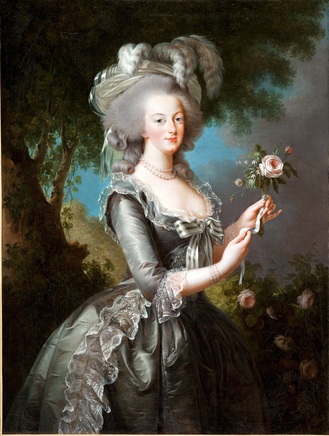 Collection of Lynda and Stuart Resnick

Marie Antoinette and Her Children shows the Queen as a regal mother. She is shown seated within the palace at Versailles and surrounded by three of her children. Vigée Le Brun based the painting composition on triangular Renaissance pictures of the Holy Family. She also consulted the Neoclassical painter Jacques Louis David in her effort to present the Queen as a dignified and morally irreproachable monarch. The portrait was a direct response to the "Affair of the Necklace" the previous year. Vigée Le Brun's goal was to present Marie Antoinette as a devout and loving mother in order to garner the affection and approval of the public. She failed. 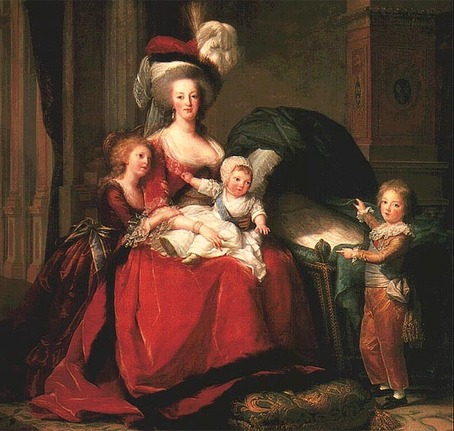 Things did not go well for Marie Antoinette during or after the painting of the portrait. Vigée Le Brun shows the Dauphin gesturing towards an empty cradle. This is the bed of his little sister who died at the age of 11 months, before the portrait could be finished. During the Revolution, David, the Neoclassical painter who had been consulted for this final portrait, became the virtual dictator of art in the New Republic and a good friend of Robespierre. Enough said.

As for the French public, they also failed to equate Marie Antoinette's depiction as regal mother with good rule, piety and impeccable morals. In a twist from the reaction to the two portraits of 1783, the formal pose and setting brought ire. They saw only the irresponsible extravagance of the Queen's surroundings, dress and hairstyle.

Although the exhibition at the Metropolitan Museum of Art presents Vigée Le Brun as "Woman Artist in Revolutionary France," that event effectively ended her career as court portrait painter. At the start of the Revolution, Vigée Le Brun fled to Italy, where she was invited to present a self-portrait for the Vasari Corridor at the Uffizi in 1790. She depicted herself painting a portrait of her French patron, Marie Antoinette. The artist chose to depict herself in a black dress with white ruff at the neck and crimson belt. Perhaps this costume was a reference to the dress of Van Dyck. Vigée Le Brun greatly admired the Flemish portraitist who became the English court painter of Charles I. 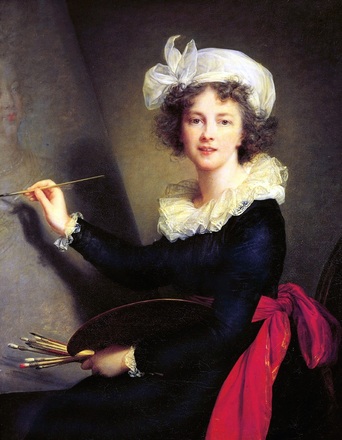 Marie Antoinette met her death at the guillotine in 1793. Vigée Le Brun traveled to various courts of Europe. She sojourned at the court of Vienna, the home of Marie Antoinette. She painted portraits of the family of Catherine the Great in St. Petersburg, and Emma, Lady Hamilton, during a visit to Naples, where her husband served as the English ambassador.

These portraits, though technically brilliant and charming, seem somewhat different from those she painted at the French court of Marie Antoinette. Somewhat eerily, they seem to be heads, disconnected from bodies and delicately tucked into beautiful gowns. Perhaps this was the result of a change in mode of painting? Could it be that the heads were rendered from sketches and substitute sitters wearing dresses visited Vigée Le Brun at her studio? Alas the very helpful wall texts and chat cards do not mention such a change in artistic production. Returning to France in 1802 , Vigee Le Brun lived another 40 years until her death in 1842, reportedly feeling removed from the age.

At a time in history when women were not supposed to be artists at all, Vigée Le Brun painted both intimate and public portraits of the powerful women of the day. Vigée Le Brun was one of only 14 female members of the Académie royale de peinture et de sculpture before the Revolution. She used her self-taught technical skills to capture the animation of her sitters and create a portrait of European women of the era. Her recognition as an outstanding portrait painter is long overdue and warmly welcomed in this splendid exhibition.

Vigée Le Brun: Woman Artist in Revolutionary France is at the Metropolitan Museum of Art from February 15 to May 15, 2016.