Following the shooting deaths of three Muslim university students in Chapel Hill, North Carolina, on Tuesday, Muslim and non-Muslim mourners alike have taken to social media to organize prayers and vigils for the victims.

Police have arrested a neighbor, 46-year-old Craig Stephen Hicks, and news reports on Wednesday indicated that the three students may have been killed because of an ongoing dispute about parking at their condominum complex. But many in the Muslim community have said they suspect the killings were a hate crime -- particularly because of a series of vehemently anti-religious pictures and messages on Hicks' Facebook page, including posts critical of Islam and Christianity. Mohammad Abu-Salha, the father of the two female victims, told The News & Observer on Wednesday that Yusor had recently said she had a “hateful neighbor” who disliked her because of her religion.

“Joining in spirit from Dubai - may Allah grant them the highest place in jannah & bring peace and patience upon their families and loved ones,” a Facebook user named Hend Abdel Sattar wrote on the Facebook group for the Chapel Hill vigil, echoing messages of support from Egypt, New Zealand, Malaysia, Pakistan and Sweden.

In Raleigh, 30 minutes from Chapel Hill, the Muslim Students Association at North Carolina State University arranged for buses to shuttle students to Wednesday’s vigil. The group will host its own gathering Thursday evening at the Brickyard, a campus pedestrian plaza. Both Yusor and Razan Abu-Salha were students at North Carolina State University.

At the University of North Carolina School of Dentistry, where Barakat had studied, a table was set up with a collection of flowers, candles and a photo of the victims. 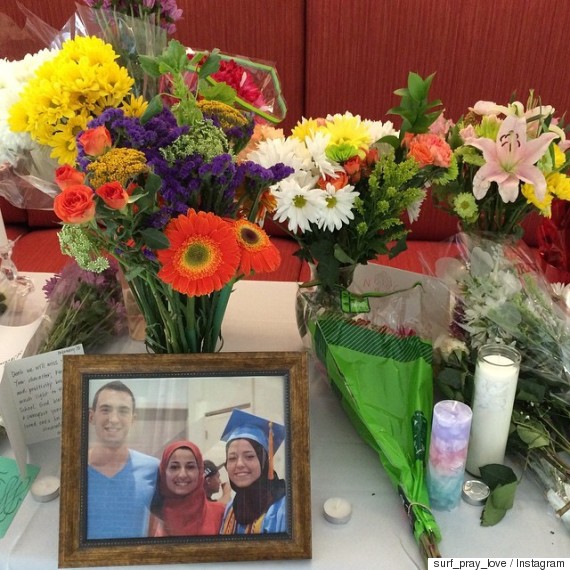 Khalid Latif, a Muslim chaplain at New York University, told The Huffington Post that a few NYU students knew the victims and will hold a vigil at the Kimmel Center for University Life Wednesday night.

More vigils are planned in Washington, D.C., New Jersey, California, Texas, Michigan, Florida and Charlotte, North Carolina. A Facebook page has been set up to keep track of events.

Some Muslims are also circulating an online sign-up sheet to take turns reading portions of the Quran, with the aim of together fully reading the holy book as many times as possible for the victims. The practice is common in some Muslim communities as a way to pray for the dead.

The Islamic Association of Raleigh, which is handling funeral arrangements, said in a statement Wednesday that it mourns its "three bright stars."

The Muslim community is deeply and profoundly saddened by this tragedy. The families asks for calm, patience and restraint, and your prayers. To God do WE all belong, and to God WE will all return. As Deah's brother so wisely stated, they are "our three winners." They have been reunited with their Lord, and we pray they all enter paradise with His choicest blessings. We all pray that Allah grant these two special and dear families: the Barakat's and the Abu-Salha's, beautiful patience in these very trying times.