Archaeologists are one step closer to solving the mystery of the ancient Viking fortress found near the Danish city of Køge, about 30 miles southwest of Copenhagen.

The fortress, a circular structure about 475 feet in diameter, was discovered last September. Now the researchers have confirmed that it dates back to the reign of King Harald Bluetooth, who lived from about 935 to 985 A.D.

"We can’t say whether or not it’s Harald Bluetooth’s fortress yet, but now that we’ve dated it to the 10th Century, the trail is getting hotter," Dr. Søren Sindbæk, a professor of medieval archaeology at Denmark's Aarhus University and one of the researchers involved in excavating the fortress, said in a written statement. "We already know that there’s a good chance that we’ll find conclusive evidence next year." 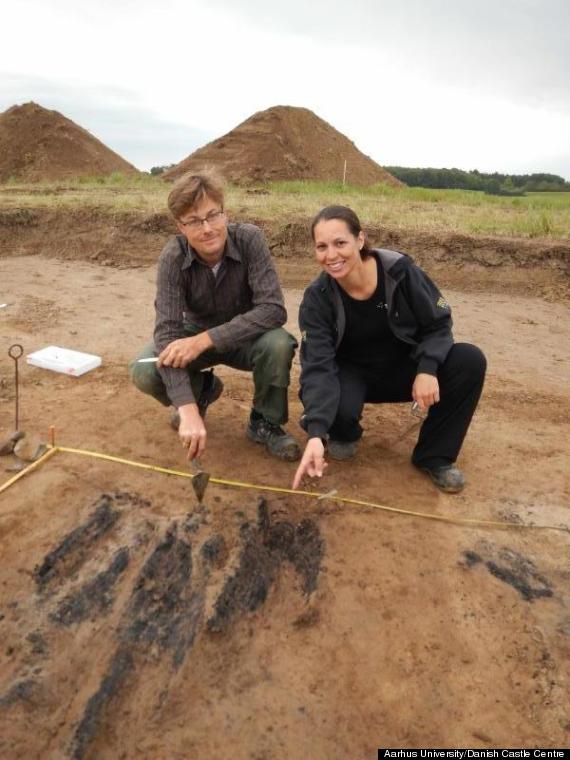 Researchers Søren M. Sindbæk and Nanna Holm show the remains of the burned planks at a gate of the fortress.

The researchers used carbon-14 dating on two logs found at the excavation site to measure the age of the fortress. Carbon dating involves measuring levels of carbon-14 and other radioisotopes in organic materials.

“The two samples were both taken from the outermost tree rings of charred logs that were found in the northern gateway of the fortress," Dr. Marie Kanstrup of Aarhus University's AMS 14C Dating Centre (where the analysis was performed), said in the statement. "The results of the two samples are almost identical: The fortress was built in the period between the year 900 and the beginning of the 11th Century."

The findings were presented at a seminar held at the university on Nov. 18.

Check out 3D reconstructions of the Viking fortress below.