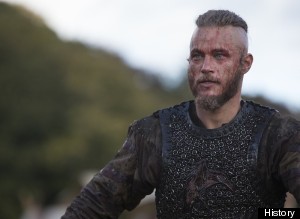 If there's one thing "Spartacus" taught me, it's not to underestimate shows that feature lots of swordplay, heaving bosoms and the occasional beheading.

Two new entries in the action-adventure genre, "Da Vinci's Demons" and "Vikings," aren't nearly in the league of "Spartacus," which recently ended its run in typically intelligent, ferocious and, of course, bloody fashion. But "Vikings," a hit that has a few interesting ideas lurking under its impressive array of beards, has grown on me, and while I have problems with "Da Vinci's Demons," I also really hope it someday fulfills its potential.

It's quite possible to watch "Vikings" as nothing more than an adventure tale about Norsemen who like to pillage settlements across the sea when they're not fighting amongst themselves. The show has grown more visually and narratively confident over the course of its first season: Its sweeping shots of the Vikings' pre-industrial world and its up-close depiction of the Vikings' hardscrabble settlements pay tribute to both the majestic beauty of their environment and the difficulty of eking out a living a thousand years ago. It's not nearly as complex as "Game of Thrones," but the appeal of an adventure show that features a limited array of conflicts in one or two hardy kingdoms can't be denied.

Speaking of uplifting sights, it was very wise of the producers to add Donal Logue to the cast (he turned up in the April 21 episode, he'll appear in Sunday's season finale and History reps says his character, King Horik, will return in Season 2). The busy actor (who will appear in the second season of "Copper" in June and return to "Sons of Anarchy" this fall) knows exactly how to pitch his performance on "Vikings," which is essentially an adventure soap opera with the occasional human sacrifice. "Vikings'" characters are mostly two-dimensional, at best, but as the energetic, savvy King Horik, Logue (like fellow guest star Gabriel Byrne) gives those two dimensions everything he's got, and in doing so, the actor ratchets up the whole enterprise a few notches.

It'd be easy to use half this review to point out "Sons of Anarchy"-"Vikings" parallels, beyond the Logue connection. Both shows feature sex, violence and power struggles, and both programs tell the stories of subcultures going to war with other armed groups in order to take what they can (also: beards). And it must be noted that "Vikings" lead Travis Fimmel, who plays the increasingly powerful Ragnar Lothbrok, resembles "Sons" star Charlie Hunnam to an almost unnerving degree. Fimmel's ambitious Ragnar is a more limited character, however, though the "Vikings" actor has expanded beyond his usual smirks and sneers to poignantly communicate Ragnar's grief over his wife's miscarriage and to silently convey Ragnar's frustrations regarding other setbacks.

The drama has also intimated that Ragnar has begun to have some doubts about his belief in Thor, Loki and the rest of the Norse gods -- and that's where things get kind of interesting on "Vikings," which explores ideas about faith with a refreshing lack of condescension and judgment. A good chunk of "Vikings" revolves around the experiences of Athelstan (George Blagden), a young monk abducted on a raid in Northumbria who is brought back to Ragnar's home to serve as both slave and confidante. As he learns about the culture of the Vikings, Athelstan sees how their embrace of their glorious future lives in Valhalla makes them almost eager for death (but not so eager that they fail to fight ferociously over plunder, of course).

The subplot about faith makes sense, given that "Vikings" debuted alongside the similarly popular "Bible" miniseries, but the show doesn't just pay lip service to Athelstan and Ragnar's religions: It takes a hard look at how people's beliefs about the afterlife affects their actions while they're alive. The show is ultimately conceived as a escapist story about life and war in the early Middle Ages, but there are very relevant questions reverberating through the heart of it. What is a "good" death, one that will lead to rewards in the afterlife? What havoc can a person wreak on Earth and still earn a reward after death? When is compassion called for, and do the gods -- or God -- care about what happens to individuals? Are people's choices always their own?

I can't believe the characters talk about these things just because the "Vikings" producers don't have the budget to show All Battles, All the Time. The show's actually interested in ideas about how and why cultures and faiths evolve, which gives the whole thing an admirable air of rough-hewn sincerity. Despite some clunky patches and cheeseball moments, "Vikings" has grown in my estimation. You won't find sparkling dialogue here, but you will find a show that's willing to shake up its core cast (something "SOA" is often loathe to do). I won't spoil things if you haven't seen the show, but let's just say that the life expectancy for your average Viking warrior is on the brief side. In any case, as long as the show keeps things moving, treats both monotheism and polytheism thoughtfully and casts good character actors like Byrne and Logue in featured roles, I'll probably keep checking in on the "Sons of Valhalla."

As is the case with "Vikings," a second season of "Da Vinci's Demons" has already been ordered, and I can only hope that the show gets better when it returns next year. I was hoping "Da Vinci's" would be a smart cable upgrade of sincere, solidly built syndicated fare like "Legend of the Seeker" and "Xena." Who wouldn't want to watch "Da Vinci: The Legendary Brain's Journeys"?

This show is not that, but as James Poniewozik noted, it's hard to say what it actually is or who it's for. I'd love to be able to watch a "Merlin"-like show about art and creativity with my 10-year-old son, but then there's the scene in Friday's episode in which a Medici lord roughly takes his mistress from behind in the stables. This kind of airbrushed sauciness on cable is so rote by now that the show's sex, so far, adds nothing to the proceedings. Even the horses look bored.

There are the glimmerings of the clash of ideas that partly animates "Vikings" -- Da Vinci is constantly battling superstition and rigid religious beliefs with scientific concepts and investigations -- but the Starz show's ample energies aren't harnessed in consistently rewarding ways. It's all over the place, and I don't think that's a sly tribute to Leonardo Da Vinci's polymath genius. On paper, a blending of "The Borgias" and "Legend of the Seeker" sounds like a lot of fun; in practice here, it's amounts to "science-swords-backstabbing-conspiracy theory-something about artistic temperaments-hey, boobs!" If creator David S. Goyer has something to say about the roots of genius, the price of power, or sex in Renaissance Florence, he hasn't yet found a coherent way to communicate it. Having said that, the show has improved from its truly clunky pilot, and the groan-inducing lines are fewer in later episodes -- which isn't to say that all the terrible dialogue is gone ("Do you think that your pursuit of knowledge makes you immune to your emotions?")

It's a little sad, all things considered, that these historical romps feel the need to amp up the sex and violence. These are certainly terrific things for a show to have in its arsenal, but these tools feel a bit worn from overuse these days. Starz seems to have sunk a lot of dough into this kind of breezy, adventure-ish fare (it's got Michael Bay's pirate drama "Black Sails" coming next year), but just because something's adventurous doesn't mean it gets a pass on coherence and gets to be sloppy. Action-adventure stories are just one way we confront our fears and desires about who we've been and who we could be. And besides, the main reason fans love(d) "Xena," "Spartacus" and "Sons of Anarchy" is because those shows made viewers care about the characters and their relationships. Budgets and naked bosoms often don't matter as much as heart, wit and pluck.

So far, however, "Da Vinci's Demons" takes one of history's greatest minds and sculpts his world down to a more manageable size. There's a routine spy story and an ongoing plot about a mysterious book that seems like it came straight from a Dan Brown novel; the upper-crust plotting doesn't have "The Borgias" tasteful hamminess; and Da Vinci himself (played by a winningly game and energetic Tom Riley) comes off as an amalgamation of temperamental/irresponsible artist types. But hey, there are zombie nuns.

In Friday's episode, a convent experiences an outbreak of madness (and all the younger residents are, of course, hot). The show telegraphs the solution to the mystery malady so early that waiting for the conclusion of the story line becomes something of a slog. It'd be worth putting up with the trudge to the finish line if the show wafted along on the force of the characters' personalities, wit or some kind of zippy momentum.

Instead, we get naked, crazy, zombie-ish nuns -- which is, I guess, something you won't see on "The Walking Dead."

Ryan McGee and I discuss "Vikings" in this week's Talking TV podcast, which also takes on "Rectify," "Mad Men," "Doctor Who," "The Bletchley Circle" and "House of Cards" (and which has a very special extra bit of content at the end). The podcast is below, here and on iTunes.