WASHINGTON -- District of Columbia Mayor Vincent Gray has turned up the pressure on the federal government to remove the Occupy DC encampment from McPherson Square.

In a letter to the National Park Service, which has jurisdiction over McPherson Square, the mayor cited rat infestations and other public health concerns to justify the eviction.

As The Washington Post reported Thursday evening, Gray's letter was accompanied by a memorandum from the city's health director, Mohammed Akhter, who has previously expressed his concerns with sanitation and public health issues inside the McPherson Square camp.

The group first gathered at the park on Oct. 1.

Akhter has compared the Occupy DC camp to refugee camps he's seen in Africa in the Middle East. Protesters have said his concerns are overstated and they are managing the problems in the park.

"Mayor Gray's description of the conditions at the McPherson Square Occupy DC encampment is a blunt assessment of the situation created by the National Park Service's decision to ignore laws designed to protect the public," said Chairman Issa. "The public health and safety situation is in itself disturbing and the refusal to provide documents about the Park Service's decision making leaves a lingering perception that long-standing prohibitions against encampments have been ignored to avoid a politically embarrassing situation for the Administration."

Issa is in the beginning stages of an investigation of the federal government's handling of the situation in McPherson Square and has set a Jan. 24 deadline for the Department of Interior, which oversees the National Park Service, to respond to his committee's request for information.

Gray offered a possible solution: relocate the Occupy DC camp with the Occupy Washington DC encampment at Freedom Plaza, about five blocks to the south. While protesters at both locations share common goals, their cultures and organizations are different.

As the Examiner reports:

Gray has walked a narrow line with the Occupiers. The mayor has expressed support for the District's Occupiers, helping make the D.C. protest one of the last major Occupy encampments remaining in the country. As arrests mounted, however, the mayor began to express impatience with the camp.

The National Park Service contends the protesters have a right to be in McPherson Square. According to Roll Call:

A Jan. 6 letter from National Park Service Deputy Director of Operations Peggy O'Dell suggested that her agency, which is housed within the Department of the Interior, has determined that demonstrators' presence at McPherson Square falls in line with previous activities that have been judged to be protected by First Amendment free speech and assembly rights.

What's coming next is not clear, but the situation gets more complicated next week when Occupy Wall Street-inspired protesters from around the country are scheduled to gather in the nation's capital for "Occupy Congress."

UPDATE, 9:30 a.m., Friday: Kevin Zeese, an organizer with the Freedom Plaza-based Occupy Washington DC camp, said in a statement that Mayor Gray's letter to the National Park Service does not mention that unlike McPherson Square, the city's Department of Health gave their kitchen a near perfect score for sanitation:

According to our kitchen team they were told by DOH officials we scored a 98 out of 100 and the only demerit came from some aluminum pans that were being recycled being in a bag that was not fully closed. It would have been nice for that to be reported so the public could see how we are approaching the importance of public health and sanitation. I suspect we did as well, or better, than many restaurants in the District.

While there is a rat problem at Freedom Plaza this has always been true, long before the arrival of the Occupation of Washington, DC. Most rats are off the Plaza area in the grass and dirt. We take great care not only to clean the kitchen but the entire Plaza. You will often find people brushing and cleaning the Plaza. We have never had any rats in our kitchen and we store all food off the ground and clean the kitchen floors more than once a day.

The mayor's suggestion that the two camps be consolidated at Freedom Plaza will present some challenges. Feeding more people means a significant increase in cost and great stress on our kitchen team. Our peacekeepers will have more people to monitor and keep at peace with each other. The two camps have different personalities and we do not want to lose the personality of Freedom Plaza. Our occupation team at Freedom Plaza is currently looking at how best to proceed if the mayor's vision becomes a reality. 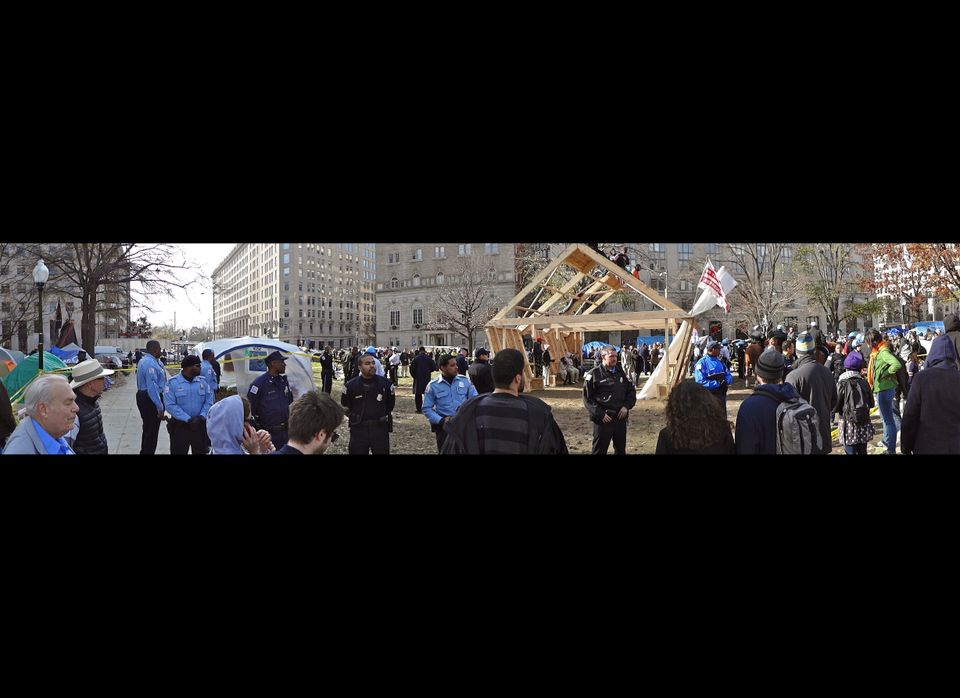