Having been previously featured in the HuffPost Gay Voices series on emerging queer designers "FABRICATIONS," Tiley is now showcasing the full range of his work at City Bird Gallery through his show, "Look at the Moon."

Tiley's work is intentionally difficult to define or categorize, in the same vein and fluidity as queer identity. While his designs involve a significant amount of garment work with heavy queer overtones, largely informed by notions of the body, his work also spans performance, print, sculpture, painting and inflatables.

The Huffington Post chatted with Tiley this week about his first solo show, what attendees can expect and how "Look at the Moon" embodies who he is as an artist. 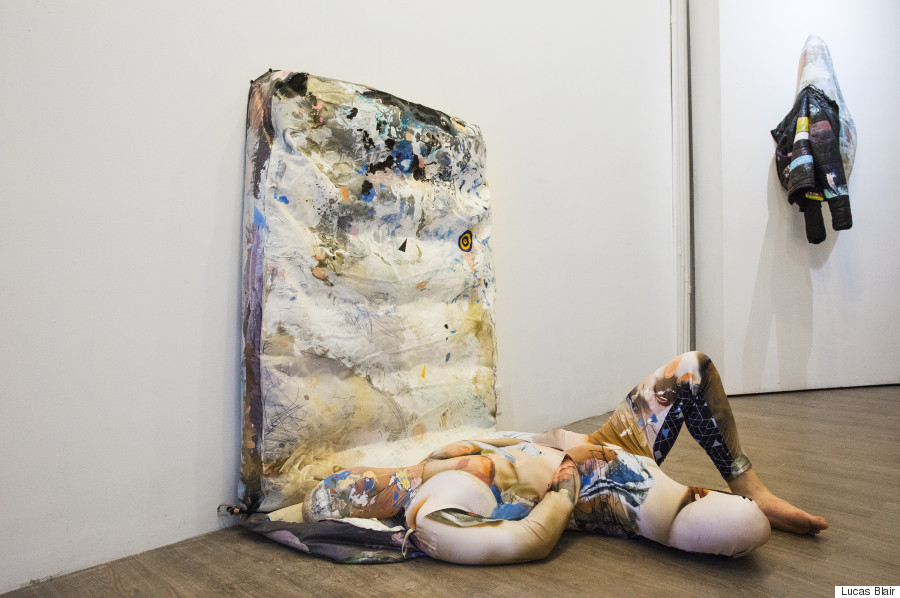 How does this solo show embody who Vincent Tiley is as an artist?
This show is nearly a complete cross-section of all the things that I do. There is garment work, performance, print, sculpture, painting and inflatables. Although that seems like a lot for one show in a storefront gallery in the Lower East Side, they all relate to one another and intermingle. I think it would be hard to look at any one piece in the show and go, "Oh, well, that's a painting, and this is a sculpture." In the show I've painted on garments and inflatables, I've created prints for tank tops that are part of an installation and I have a performer in a body suit that restricts his movements so that he behaves more like a sculpture. I'm pretty allergic to categories and labels; the work in this show reflects that attitude. I think this is a queer way of thinking of artistic disciplines. Also, every piece in the show in some way incorporates clothing. It's definitely a statement. 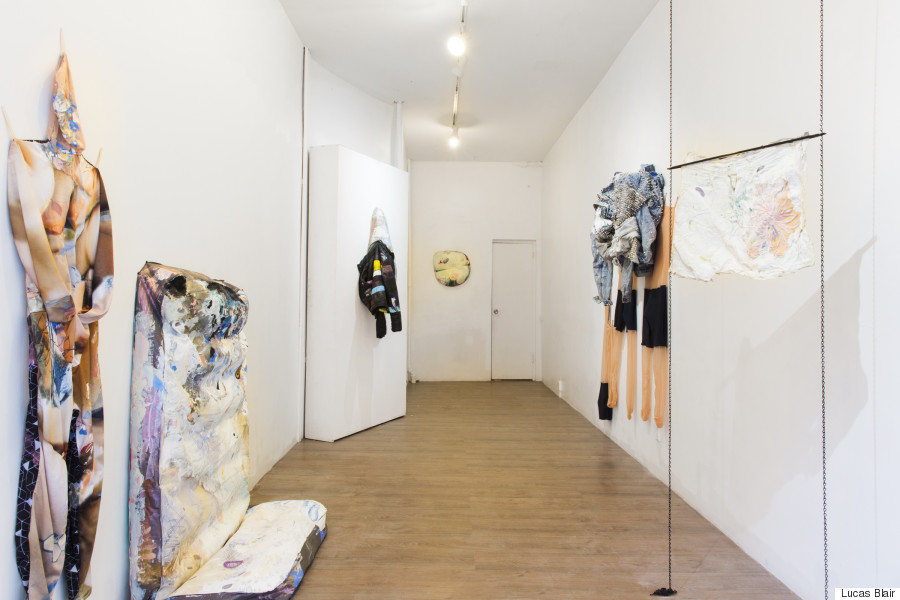 In your own words, your work draws on "queer youth culture, nightlife, personal narratives and the legacies of Modernism, using materials and forms from drag, fashion, fetish, and abstract painting and sculpture." How do we see this through your work in this show?
I think a really good example in the show is my piece "Sleepyhead Sweetie." This is my newest performance piece. On the opening night and throughout the installation of the show my amazing performer Jason Michael will come in and "perform" in the suit for three hour increments. I say "perform" because the suit restricts his movements while he lays on a painted, defective air mattress. The suit also forces his hands in his crotch and completely covers him like certain types of fetish gear similar to a zentai suit or straight jacket. Like I said earlier, the experience of this piece is more sculptural than other performances. It's not anything really choreographed. He just activates the suit by wearing it... or it wearing him.

The suit is covered in a print that I designed from personal photos and is also painted. When he lays at the foot of the air mattress he looks like a paint spill coming off the "canvas." He blends into the painting on the mattress and his body becomes part of the composition. The whole painting is also filled with certain art historical touchstones, such as Ab Ex painting, Robert Rauschenburg's bed painting and Jasper John's target painting. I wanted to pull from their history as lovers while also drawing on the kind of intimacy Rauschenburg achieved in that bed painting and the violence inherent in the act of seeing that Jasper John's target paintings embody so well. I painted a target on the bed not only to visually bring the two artists together in this piece but to also antagonize the viewer into wanting to pop the mattress. I think a lot about how these artists are exhibited together (often hung on opposing walls) and I fantasize about decoding something in their work that might make me understand their relationship. I always get misty when I see their work together. 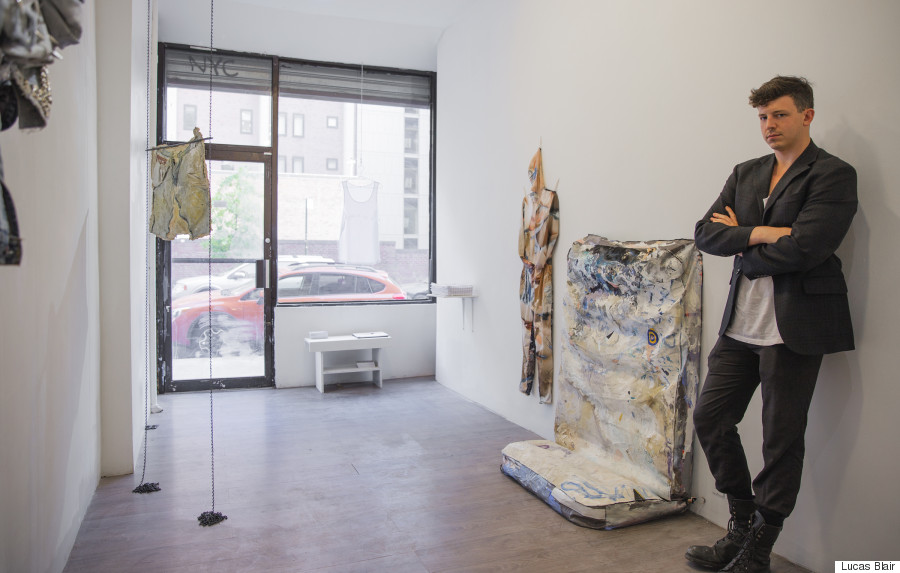 What can people expect from this show?
I want each piece in the show to be a different clue in a larger emotional narrative or landscape. I think the audience can expect to be seduced yet antagonized by the show. I'm a pretty big tease. The work in the show is very coy, alluring yet resistant. However, it still has a lot of heart and in the end there is a certain sense of intimacy. 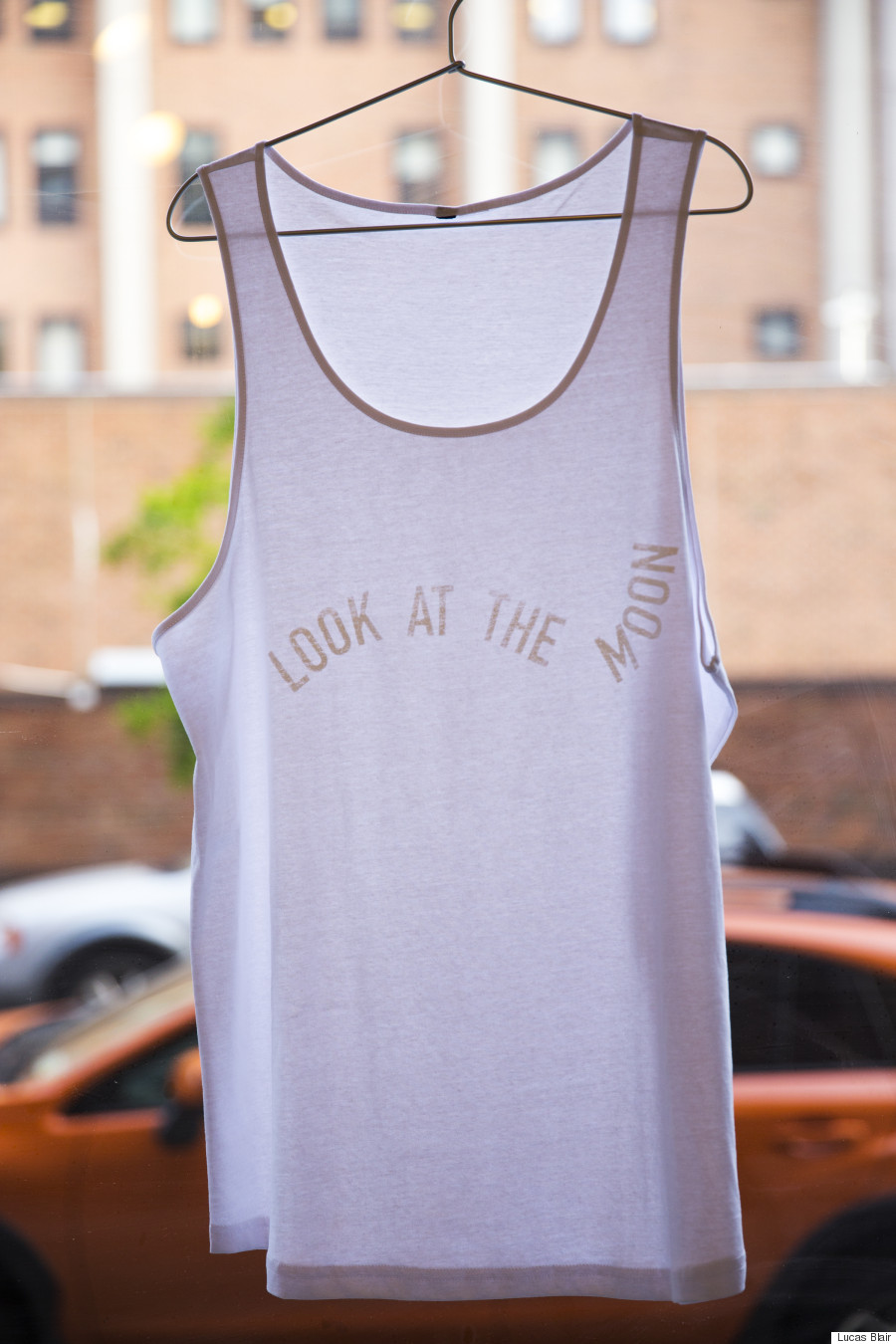 What does the future hold for Vincent Tiley?
I am about to go back to West Virginia where I grew up. I'll be shooting a video with Fred Attenborough and my parents that will take place in a hospital room and out in the Monongahela National Forest. The video will be Sci-Fi-esque and will examine a queer body relationship to it's surroundings. My goal is to bring attention to the body as not only an element within a larger environment comprised of other bodies but that the body itself is also an environment to much smaller organisms.

"Look at the Moon" will run at City Bird Gallery in New York City's Lower East Side through May 28. The opening performance will take place May 21 at 8 p.m. and the closing performance May 28 at 8 p.m. Head here for more from Vincent Tiley.