Last week, my 42-year-old dryer gave up the ghost, mid-load. Worse, I think I killed it. I put a wet heavy blanket in it and turned it on to the high cycle, something I've done numerous times before. But under the strain, its aged heart, er, power relay, gave out and it tumbled its last. Services are pending.

Now, those who are not pathologically sentimental saps would think of this as an appliance. But this machine and I had become close, especially so during my grueling single mom years. It's a sad commentary when for a decade the only stable influence in your life is your dryer.

A 42-year-old dryer is 250 years old in appliance years so I knew this time was coming. Of course, I've been thinking that for 30 years now. Amazingly, it had only two repairs in its entire now-ex life: a new gasket around the door in '87 and a motor repair in '96. While every other appliance in my adult life has precipitously crumpled (generally at maliciously inopportune times), the dryer just kept chugging along, year after year, decade after decade.

I even considered having it repaired, assuming one could even get parts for a 42-year-old dryer. My unsentimental husband, Olof, rolled his eyes. He doesn't call me the Grim Weeper for nothing.

Over dinner, I explained to him my attachment to the machine, aside from the fact that it reliably worked. (I can become attached to anything in my house that reliably works.) But my whole adult life tumbled inside that drum: my 70's bell-bottoms, my ex-husband's khakis, goobery bibs and tiny socks, kids' play clothes, filthy tennis shoes, and later on, soccer goalie shirts, grass-stained baseball pants, basketball jerseys, crew uniforms, Olof's Dockers, tons of towels and a mountain of bedding. Literally thousands of loads. How can you not form an attachment to something that has seen your underwear at its worst?

The dryer was purchased when my first husband and I bought this house in 1973 and we went for the all-the-rage new color: avocado green. None of those passé white appliances for us! Of course, we could have gone for the other hot new color, harvest gold, but we liked the way the avocado green matched the equally trendy green shag carpet that was already in the house.

Over the years, people who have seen our avocado green dryer have ridiculed it with "Geesh, that color was hideous." News flash, millennials: people coveted this color in 1973. In 2030, those au courant stainless steel appliances and subway tiles will have people cringing. Believe it.

Of course, ever decorating-forward, we also purchased the dryer's chromatic counterpart, the avocado green washer. Alas, it succumbed in early 1980's, widowing the dryer at the age of nine (75 in appliance years).

An incident in 1983 almost did the dryer in. My first husband and I had separated days earlier and there was no happiness in my life at the time. My older son, Rory, recently six, ever a barometer for emotional distress in the household, decided to shift the focus. While playing with the hose on the patio, Rory suddenly noticed the dryer vent on the side of the house and decided, for reasons probably best left to him, to stick the hose in it. A dryer full of water was, without saying, an eventuality not covered in my owner's manual. I bailed it out but was still afraid to turn the dryer on. I had visions of becoming the subject of one of those consumer safety shows where they pan up to the charred remains of my house as the commentator intones in a somber voice: On July 15, a San Diego housewife, lacking even a modicum of knowledge of electric current, or even any common sense, turned on the power to her water-filled dryer, setting off an explosion that not only incinerated her own house but most of the block as well. (Cut to cemetery where a small engraved urn surrounded by flowers reposes on a grassy hill.) So I called a neighbor who ascertained that the electrical parts of this machine were not wet and recommended running the dryer for several hours to let it dry. Which I did - standing over it with a fire extinguisher.

Despite the dryer's brief masquerade as a washer, it valiantly tumbled on. While my thirty-something sons have often offered to buy me a new one, I couldn't see replacing a working dryer. They saw ugly. I saw family.

Before they took my avocado green friend away, I hugged it. Well, as much as you can hug something that is 27 x 29. I even suggested to Olof that we have a party for it. "Inga," he kept saying, "it's a dryer." He suggested moving it out to the patio as a retro serving piece if I truly couldn't bear to part with it.

So the new dryer is here. We're still bonding. And I've still grieving. If only I hadn't set the dryer to high. If only I'd put the blanket through an extra spin cycle. If only...

PHOTO GALLERY
When Vintage Trailers Were New
Download
Calling all HuffPost superfans!
Sign up for membership to become a founding member and help shape HuffPost's next chapter
Join HuffPost

My Dryer: In Memoriam
When Vintage Trailers Were New 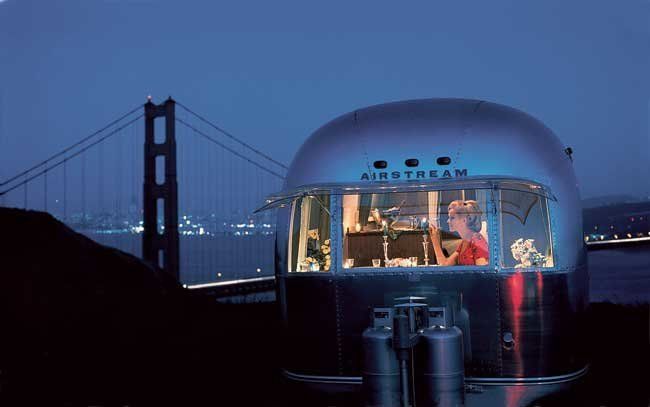 1 / 13
An Airstream with a gorgeous view.
Airstream