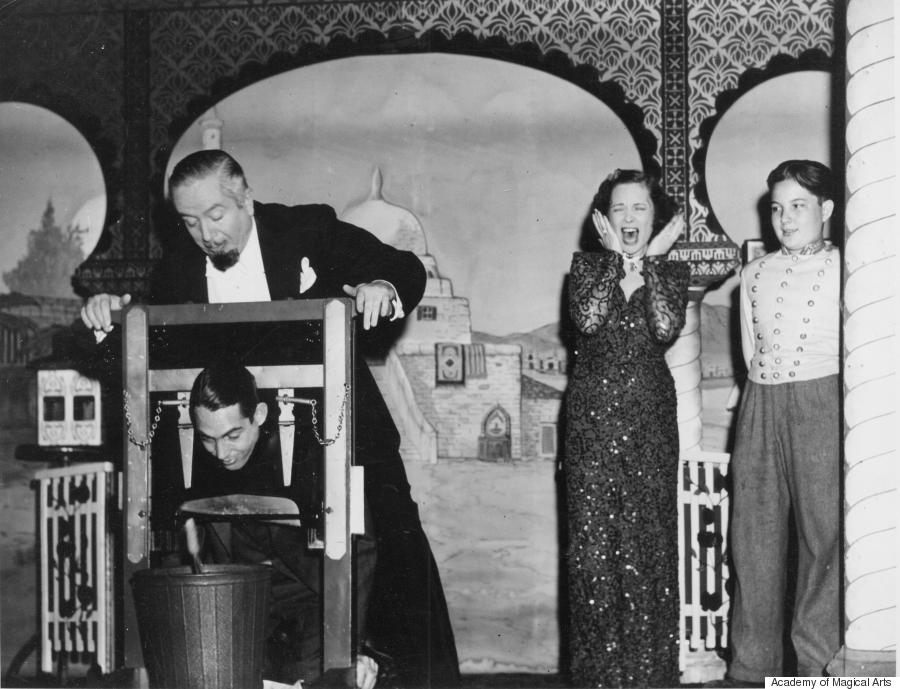 A death-defying trick: Bill Larsen, Sr. enlists an audience members for a death-defying trick utilizing the Thayer head chopper, while Geraldine (in mock horror) and Milt look on, circa. 1940. "I grew up in a kind of Alice in Wonderland world," Milt Larsen said about his upbringing on the road in a family Vaudeville act.

The Magic Castle, one of Los Angeles' most prized (and private) landmarks, is the headquarters of a members-only club that is intensely dedicated to the art of magic. Called the Academy of Magical Arts, the castle doors opened in 1963, but its history goes back much, much farther.

The 1910-era Gothic Renaissance chateau sits in the middle of what is now historic Hollywood and was originally the personal residence of a wealthy banker, Rollin B. Lane. The mansion fell into disrepair by the late 1940s, even serving for a time as a boarding house, before Bill Larsen Jr. and his brother Milt Larsen purchased the property to breathe life into their parent's lifelong dream of opening a magic club. 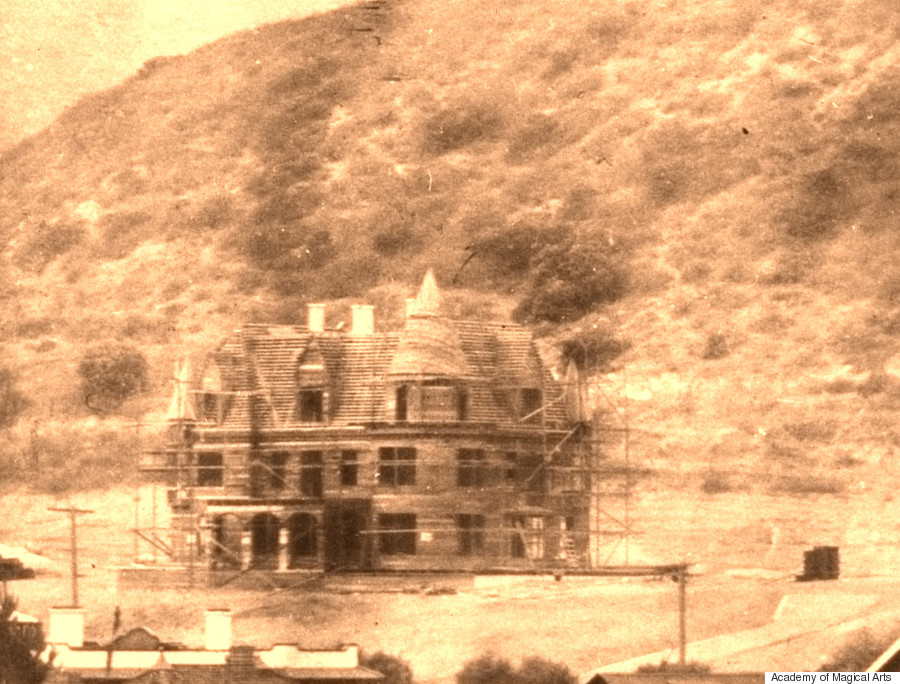 The Lane Mansion under construction, 1909-1910: The Lane Mansion, which would later be rented by the Larsen brothers, was originally called Holly Chateau. It was built amidst the famous orange groves of Hollywood, California in 1910. The brothers secured the property in 1961 on nothing more than a handshake.

The Larsen family is a true magic dynasty. William Larsen, Sr. and Geraldine Larsen were pioneers in the field of magic. Geraldine was one of the rare female magicians of the day -- at a time when women were magician’s assistants (being sawed in half), not magicians themselves. She also became the first woman to perform magic on television in the late 1930s. 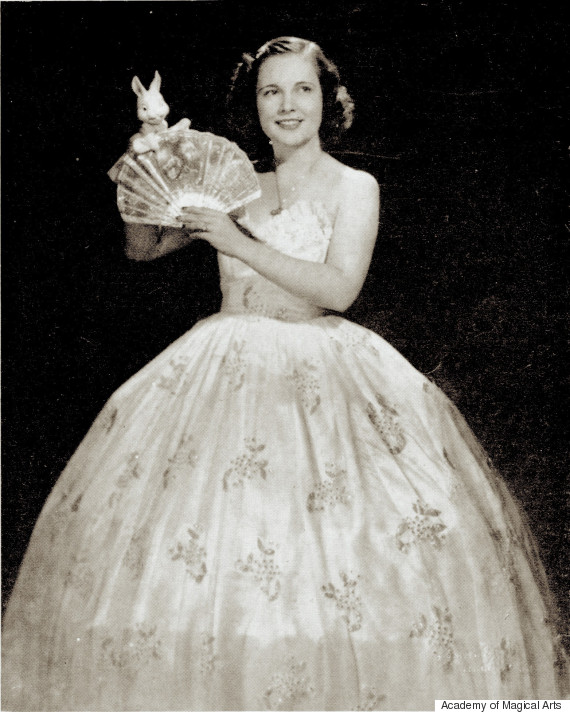 Geraldine Larsen performs one of her signature tricks: Geraldine Larsen, often referred to as "the First Lady of Illusion,” performs with Peterkin the rabbit -- an act that is re-enacted on stage today by her great granddaughter, Liberty Larsen, in a contemporary, live magic show.

On top of all that, in 1936, the Larsens launched Genii, the longest, continually running magic magazine in the world, which is still published today. During the Depression, the family, including sons Bill, Jr. and Milt, began touring as the “Larsen Family of Magicians,” playing upscale, resort hotels all over Southern California.

Today, guests from all around the globe travel to the castle to see its high quality magic shows. The AMA’s membership includes entertainment’s most preeminent magicians and illusionists, including Penn and Teller, Lance Burton, David Blaine, and Siegfried and Roy. There is a strict formal dress code and one can only visit if already a member (or, as the plus one of a member for the evening). 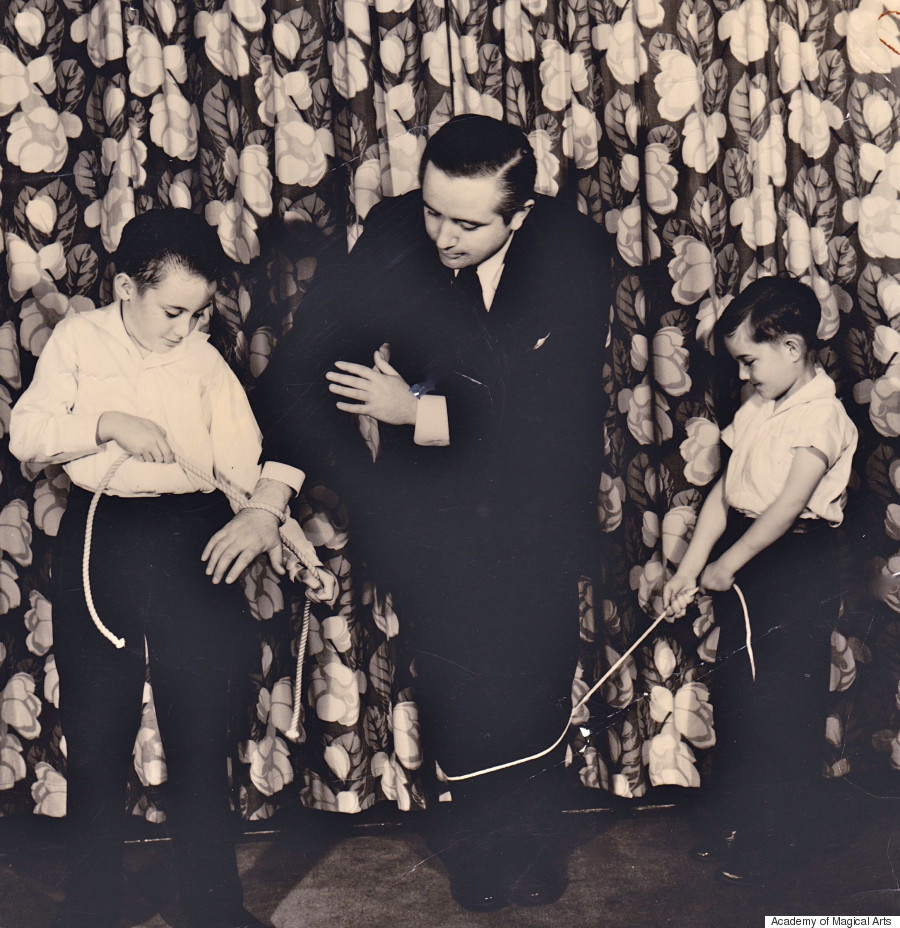 The Larsen Boys: Bill Larsen, Sr. teaches young sons, Bill, Jr. (left) and Milt, the ropes of magic and an escape trick, circa. 1930.

Back in the day, Hollywood royalty like Cary Grant and Johnny Carson visited often, and today, Johnny Depp, Jimmy Kimmel, Sarah Silverman and Katy Perry are frequent guests. This year, Perry rented the whole castle out for her costumed birthday party.

The Magic Castle combines illusion and mystery with a kitschy history of Hollywood. Much of the ornate decor was rescued from wrecking balls on construction sites or from Hollywood studio sets before they were dumped into the trash. Secret doors and panels hidden all over the castle lead to the 13 different performance stages.

The Huffington Post acquired vintage photos directly from the Academy of Magical Arts (many have never before been published) to see what magic used to look like. 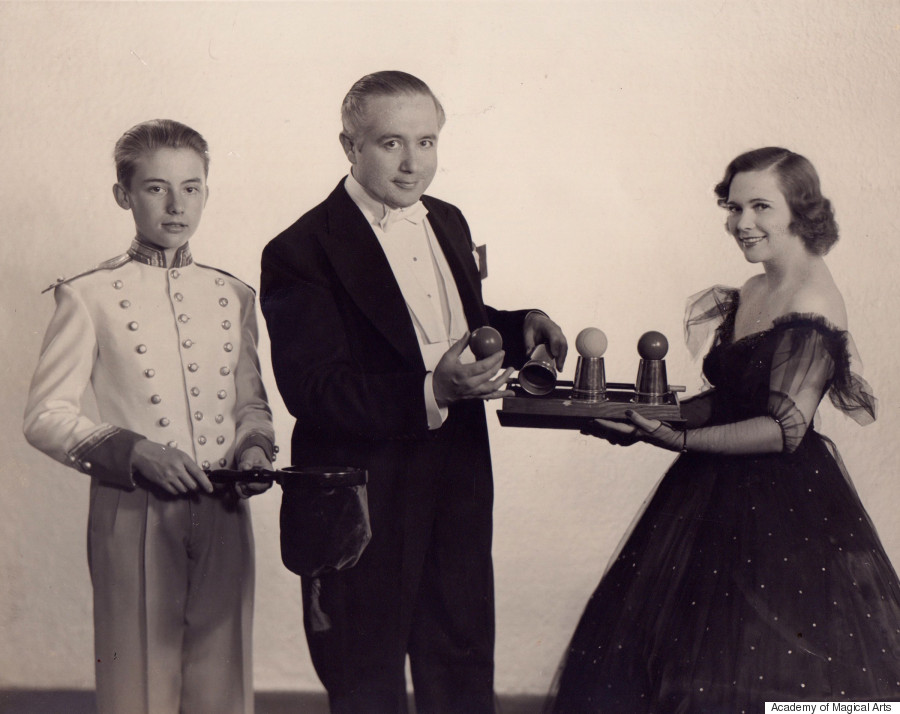 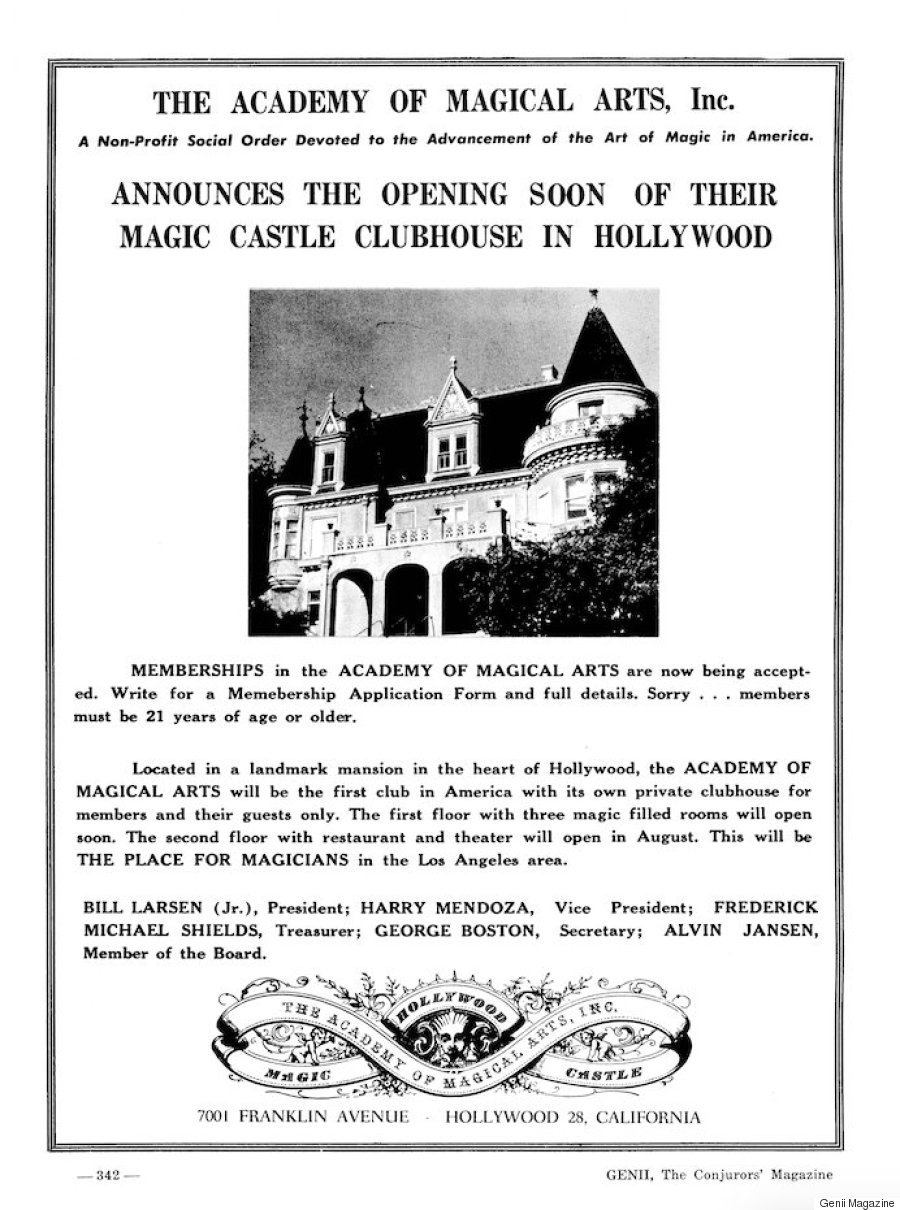 A call for members: Advertisement in Genii magazine in May 1962, soliciting membership, eight months prior to the club’s opening. 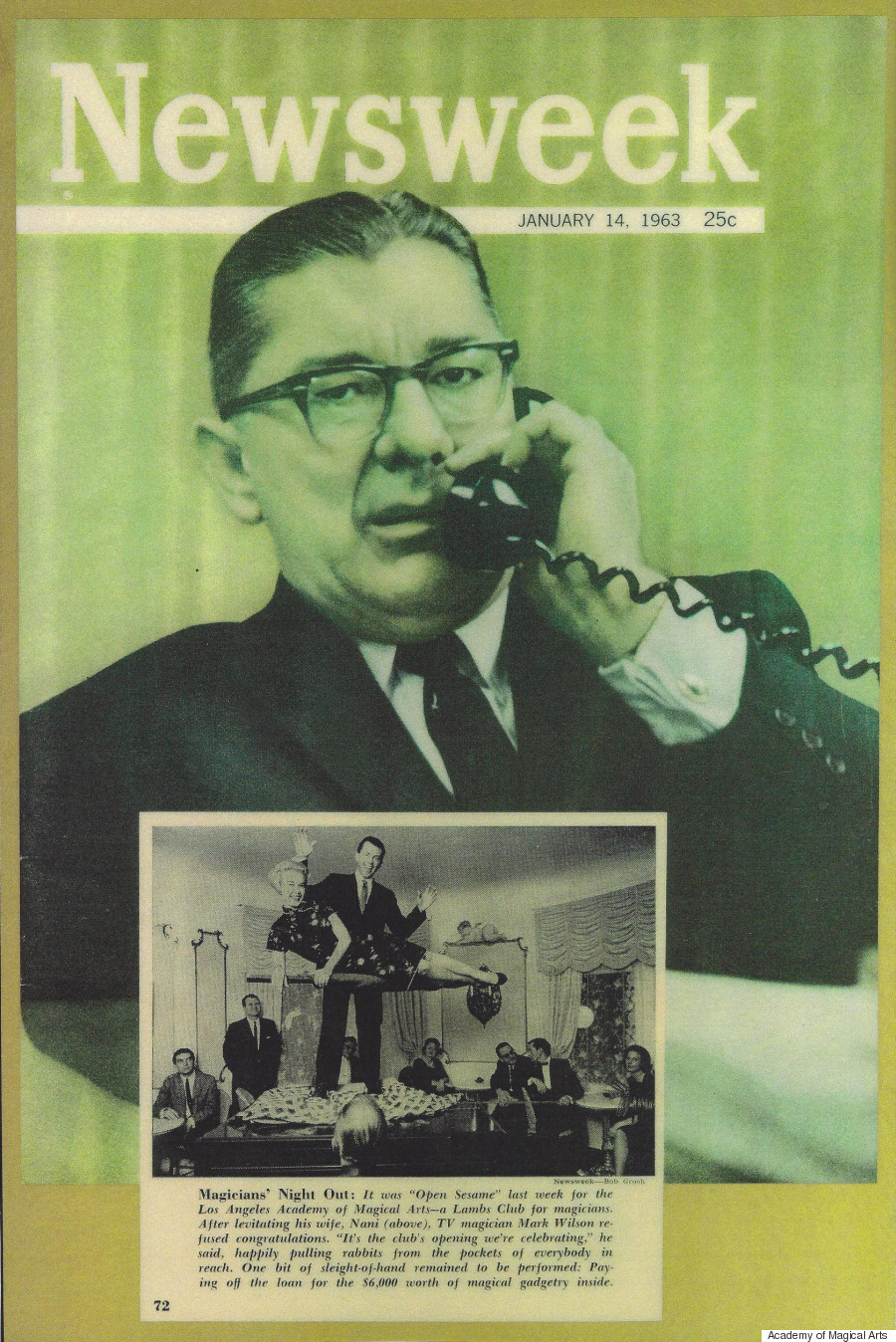 1963 issue of Newsweek: On Jan. 14, 1963, Newsweek magazine ran a story about the opening of the Academy of Magical Arts and the Magic Castle. In the article’s accompanying photo, magician Mark Wilson levitates his wife, Nani. 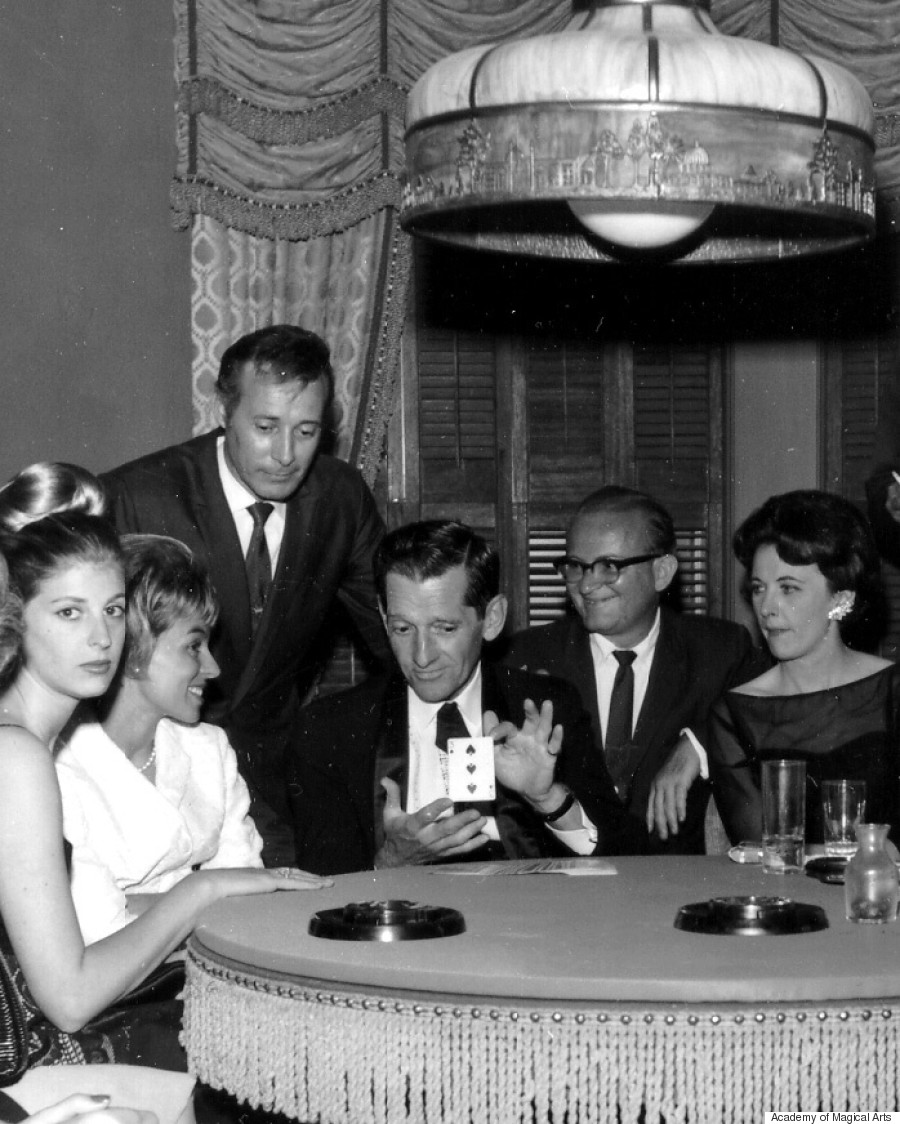 Jay Ose's close-up: Late magician Jay Ose (1911-1967), one of the AMA-Magic Castle’s first resident magicians, performs close-up in the mid-1960s. While the mansion was being renovated in stages, Jay lived upstairs for a time, in a room that had not yet been remodeled. 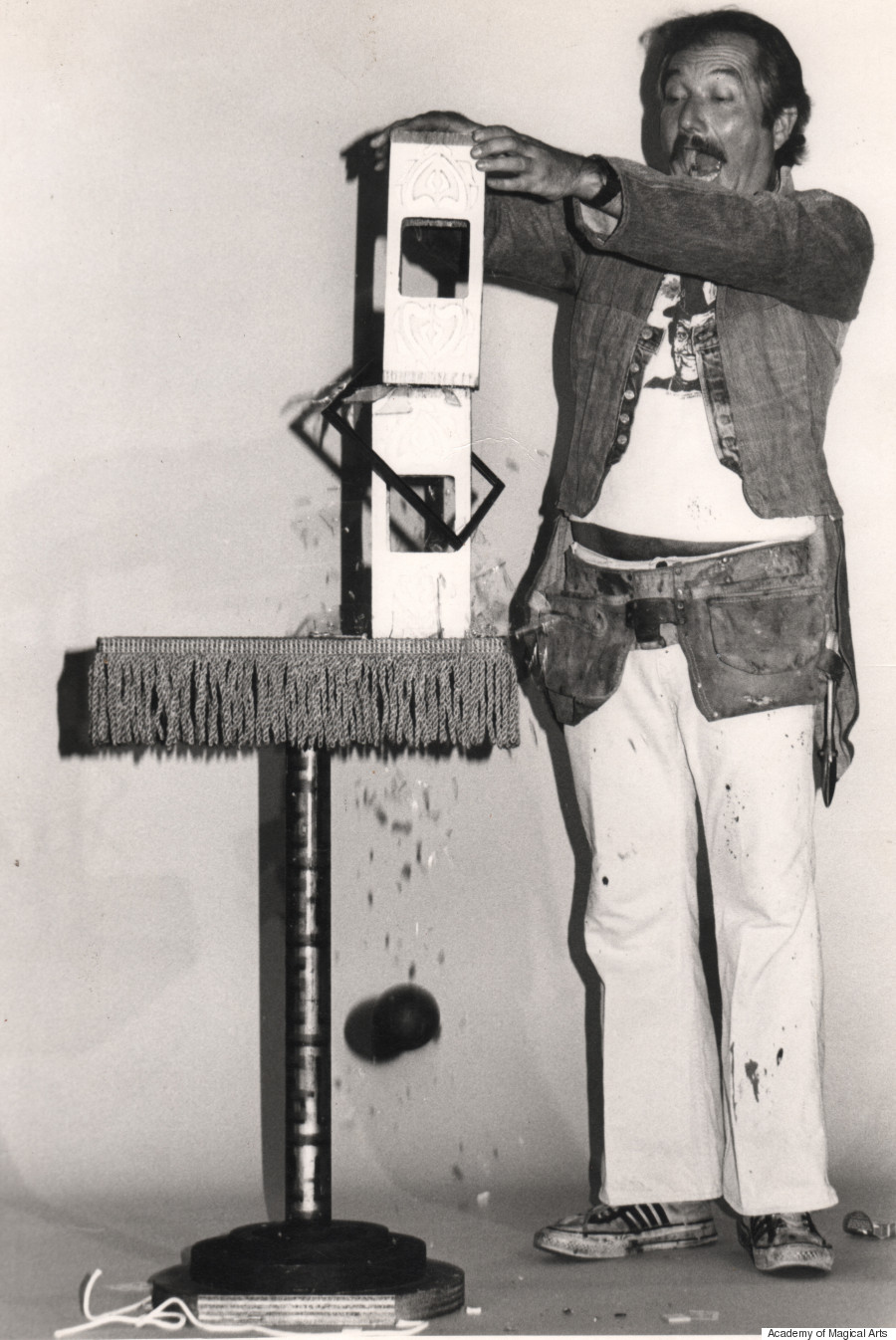 Milt Larsen performing his “Illusion-Delusion” effect: Larsen in in the 1970s during his signature carpenter’s magic show. The Illusion-Delusion was performed by three generations of the Larsen family. 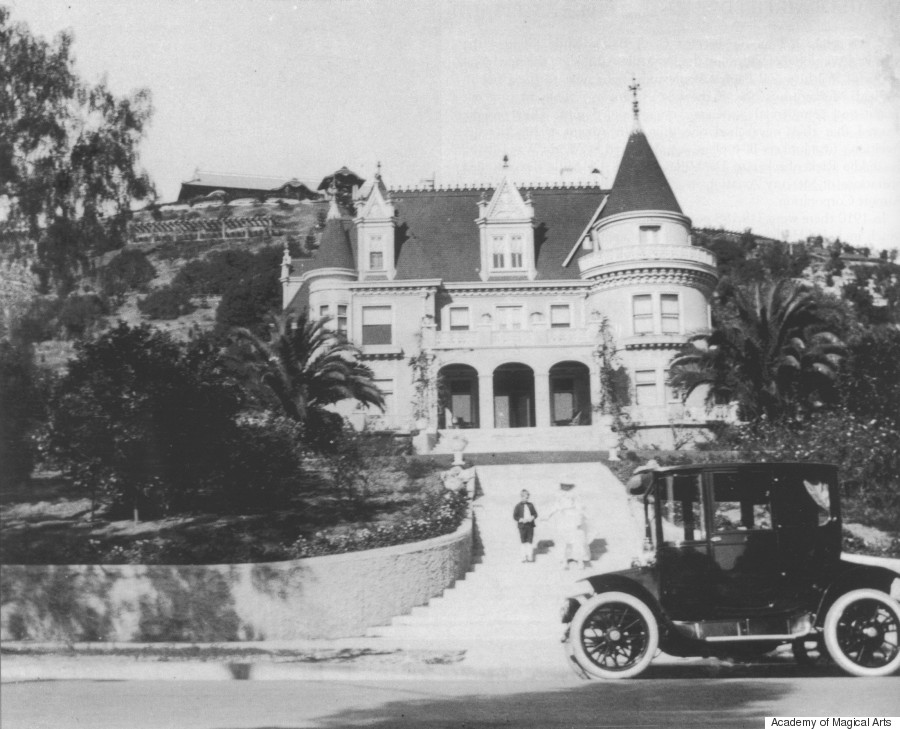 Lane Mansion in 1920: For 30 years, Holly Chateau was one of the most recognized addresses in Hollywood and was a popular destination for the area’s social elite. Katherine Lane was a renowned hostess and hundreds of newspaper articles attest to the elegant and elaborate luncheons, teas, musicals and lawn parties held for artists, orphans, community leaders and world travelers. 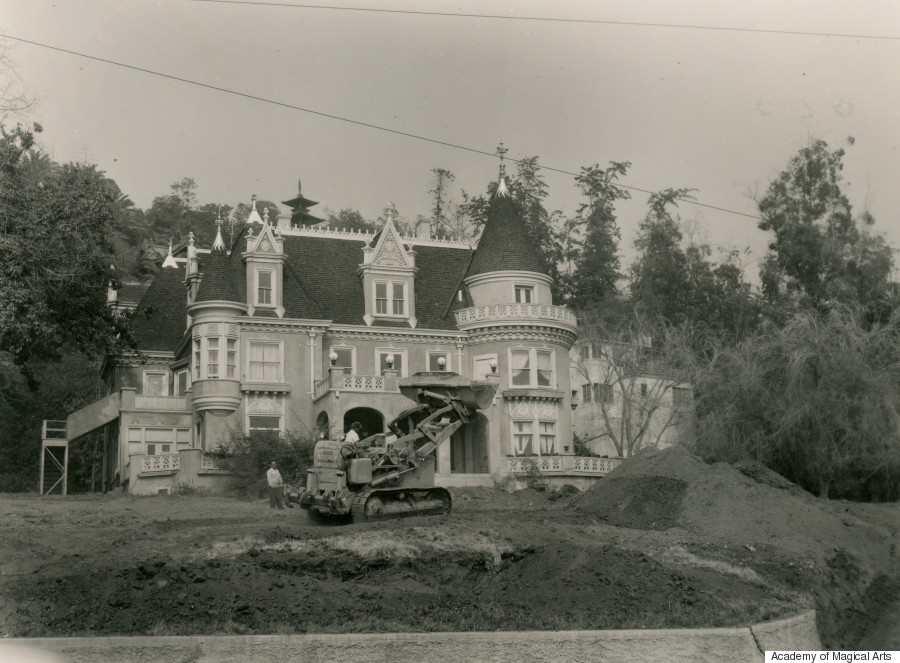 Renovations for the Magic Castle begin in 1962. 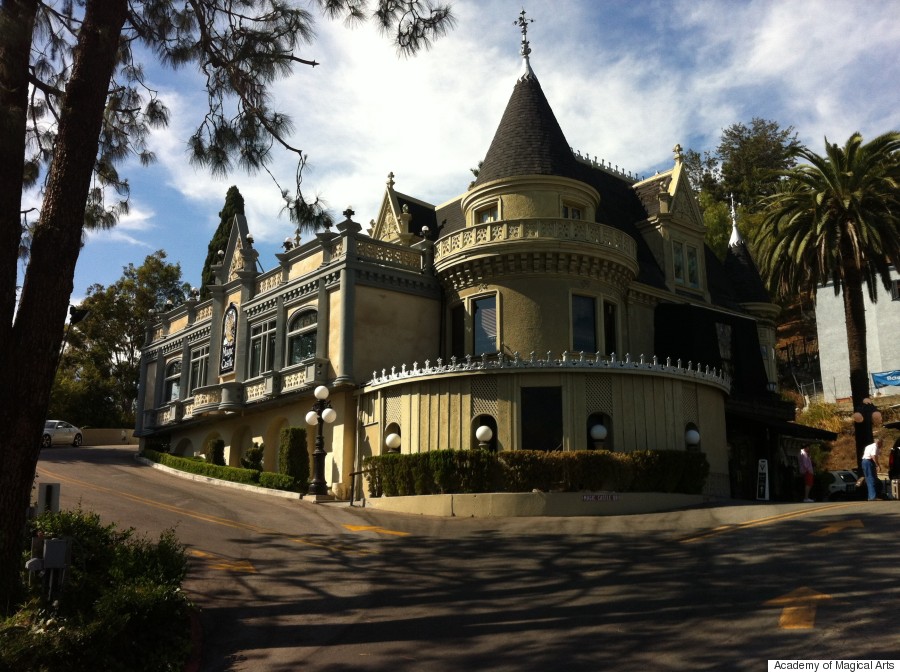 Captions, in part, provided by the Academy of Magical Arts.