The words below are the full text of a poem by an anonymous rape survivor. Yesterday, they were floated in the Reflecting Pool, with symbolic resonance, between the Lincoln and Washington Memorials in Washington, DC. The letters were put into the pool yesterday afternoon by the guerilla art movement FORCE: Upsetting Rape Culture. Over the course of several weeks, the FORCE team created giant, red styrofoam letters in order to assemble the words. 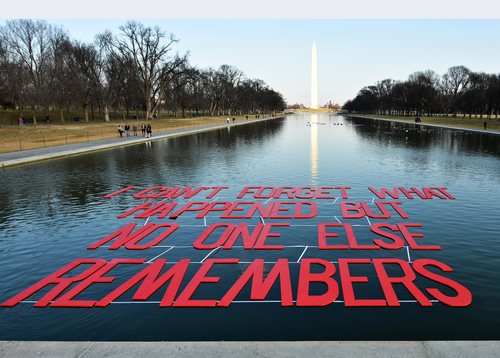 It was beautiful and haunting to those who saw it. I was there and spoke to people who, casually sightseeing, stopped to talk and think about what we were quietly doing on a sunny, cold day on the Mall. Along with Holly Kearl, the founder of StopStreetHarassment, I ended up helping FORCE mount the poem on the steps of the Memorial. How does this help anything? Why would anyone do this?

Well, today there is Reeva Steenkamp. This morning's newspapers are filled with news of her death. She was the woman allegedly shot by Oscar Pistorius in an alleged act of small-arms-in-the-home domestic violence that resulted in her death. To read the news reports, you'd easily lose this central fact in stories filled with narratives focusing on the career of the paralympic athlete and bikini-clad, vamping photo spreads of Steenkamp. That, and the message that despite past incidences of violence, as was the case with Katrina Perkins and Jovan Belcher, many people on editorial boards really wants us to know that "they had a healthy, fabulous relationship."

The news of this murder surfaced on the same day as the V-Day One Billion Rising global strike against violence against women. In my lifetime, there have not been many transnational strikes for women's rights. I went because women and men who defend their rights chose to transcend difference and speak peacefully with one voice. The global diversity of particpants spoke directly to how violences against women are broad and manifest themselves differently in different contexts. Their root cause -- brutal physical domination that is the core of patriarchy -- is the thread that binds them. But, there is also one other: the degree to which it is hard to face, digest and deal with. It's sad, grim and depressing. But, ignoring and sugar coating the reality only perpetuates it.

FORCE doesn't just want us to openly confront and dismantle this culture. They want to create safe public spaces where survivors of violence can find affirmation and healing. FORCE is dedicated to changing the national conversation around violence against women, specifically, sexualized violence.

"We built this temporary monument as a call to create a permanent monument to survivors of rape and abuse in the United States. It is the first of many actions and the beginning of a larger campaign," explains Rebecca Nagle, one of the founders of FORCE.

The floating poem is the latest in a series of actions undertaken by the group. You might recall their recent panty prank "PINK loves CONSENT," a fake website pretending to be Victoria's Secret. The site was filled with underwear printed with consent-themed slogans like "ASK FIRST" and "NO MEANS NO."

Last fall, the group projected RAPE is RAPE unto the U.S. Capitol Building. The group exists, as they put it, "to upset the culture of rape and promote a culture of consent" and they are doing a good and creative job with a hard-to-digest topic, capturing the public imagination with their tactics.

Some think that people like Rebecca Nagle, Hanna Brancato, Holly Kearl -- people who attended VDay events around the world -- and I are deluded in believing that this can happen. I think they're part of the problem and we need to stay focused. No matter how long it may take. Setting aside a moment to dance or to create art (a luxury and privilege to be sure) puts aside in favor of common humanity, ever so briefly, the sad and persistent brutality at the heart of rape and domestic abuse violence. Art doesn't just reflect culture, it presages change. 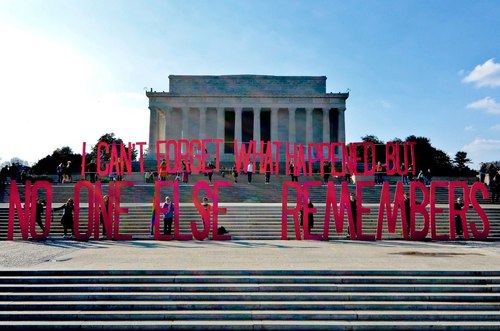