In the Ukraine and Russia, thousands of women used the hashtag "I Am Not Afraid To Say" to share their personal experience with sexual assault.

In China, individual stories of women who have experienced abuse, often at the hands of intimate partners, have gone viral on Weibo, the Chinese version of Twitter.

In the United States, women have shared their stories under any number of popular hashtags, and some cases end up in mainstream media.

Consider that one in three women will experience violence in her lifetime, and it's no surprise that so many around the world have stories to share. But the stigma around sexual assault is almost as universal as the violence itself.

And that's where online and digital spaces have made a difference. They have given survivors connection and community, and inspired national conversations on a historically difficult issue.

A recent report estimates that 47 percent of Americans have experienced harassment and abuse online.

What's interesting is that, while both men and women reported being harassed online, the kinds of harassment they experienced were different. Men reported being called names or being embarrassed, while women were stalked, sexually harassed, or threatened with rape. In other words, the type of abuse experienced by women, especially young women, was more likely to have a severe, negative impact on their life offline.

That impact means that gender-based violence online matters -- to all of us.

It matters from a foreign policy perspective as well. Gender-based violence is one of the key issues I've worked on at the State Department. We've see how it holds back women and girls from getting an education, earning an income, participating in political processes, and ultimately contributing to their societies. And that holds all of us back from reaching our shared goals of peace, prosperity, and security.

So addressing these forms of violence, wherever they occur, is an important part of U.S. foreign policy. Earlier today, I spoke at the Family Online Safety Institute's annual conference, where I highlighted three ways that governments, civil society organizations, and the private sector can work to address the issue of online gender-based violence.

First, we have to acknowledge that it is a problem that needs to be solved. Sometimes, people look at these issues and say, this is inevitable, or it's just the cost of being online. But violence is not the price women should have to pay, and it's not the price democracy should pay either.

Women's voices and experiences are too critical to public discourse. So we need more researchers, more journalists and more advocacy organizations to acknowledge that this is a problem, and put a gender lens on their own work about online harassment.

Second, we need to break down the barriers that keep women from thriving in the technology sector. There are many reasons why we need more women and girls pursuing science, technology, engineering, and math, and gender-based violence on the Internet is high on that list.

We need more women serving as CEOs and board members, as engineers, as product designers, and as customer service representatives.

That way, when products are designed, new features are tested, or issues come up, women are at the table and sharing their perspectives and experiences. 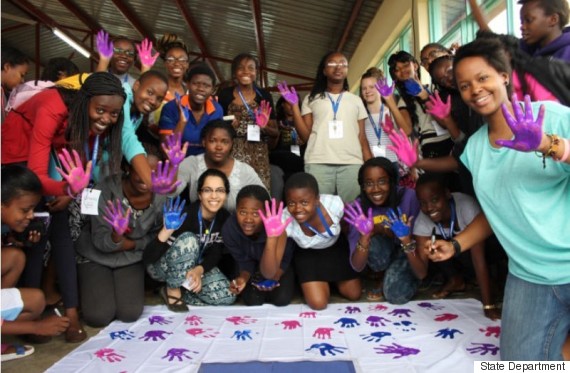 (By the way, this is more than just a pipeline problem. Institutions need to address the systemic discrimination that hold women back from succeeding in STEM fields.)

That has not been an easy task. But by and large, people understand that these issues matter, and that U.S. foreign policy is stronger and more successful when it includes the voices and experiences of women and girls.

From my perspective, that's where we stand on this issue. We need to articulate exactly what the problem is and the ways that we can work together -- at every level of leadership -- to solve it.

That's the challenge that we face today. We need everyone -- experts and entrepreneurs, CEOs and survivors, developers and rights defenders, journalists and policymakers -- to come together and find solutions that work.

There's no question that the United States should be a leader in this effort.

We have the experience based on our work tackling violence against women in the United States. We have the moral standing as the world champion of democracy, free speech, and human rights. And we have the unique role as the country where the world's largest tech companies are based.

Our responsibility could not be more clear. But the clock is ticking. Technology is already getting ahead of policy, and the longer that goes on, the harder it becomes to figure out what frameworks are needed to make online spaces truly accessible to all.

But what's also clear is how much is at stake. In Pakistan earlier this year, a young woman named Qandeel Baloch was killed. She had been a controversial online persona famous for her selfies and cultural commentary. Some people dismissed her, while others said she stood as a symbol for women's rights in Pakistan.

She was killed by members of her family  --  all because her online presence was viewed as dishonoring them. For her, the cost of being online and speaking her mind was her life.