In "A History of Violence," I wrote about our culture of violence and the Newtown tragedy in particular.

Now it's Roanoke, VA. Violence served up live. News as violence, violence as news. I'm tired of people claiming that it's solely the mentally ill who are responsible for this epidemic. Otherwise perfectly adjusted British teenagers volunteer for ISIS. The draw of violence is indubitable. We are co-creators of a culture of violence. Violence is big business. But we don't see how it operates or is sustained because we keep things in compartments without grasping how interconnected they really are. We slice and dice "causality" and correlation" without seeing that this is because that is. We interare, as my old teacher used to say. What happens here affects what happens there, and visa versa.

Here's a simple and timely example. Donald Trump calls women the most vile names, and yet his star continues to rise. Verbal insults, a form of violence, co-create an environment where violence is not only countenanced, it is celebrated. We become desensitized; what offended us yesterday becomes today's new normal. The bar is raised. We're like the frog in a pot of warm water. Feeling good. The temperature rises in tiny increments, and it still feels okay. But the frog doesn't realize he's being cooked. I am not preaching politeness or phony political correctness. This is about seeing how we are creating the conditions in which violence and the anguish it spawns thrive.

Since 2006 my colleagues and I have worked with thousands who know violence and its impacts all too well: returning service members, veterans, their families, and their caregivers. Here's one of the things I learned: War trauma is like an IED blast. The sonic waves radiate out on multiple levels simultaneously, fragmenting the intrinsic connections within the warrior, his body, brain, mind, and soul, fragmenting his family, social supports, relationship with his community, the organizations charged with his care, the institutions and leaders responsible for protecting the country, and the entire culture. For a very long time.

This is how our humanity actually works. This is cause and effect in action, sometimes called karma, and pitifully misunderstood. Do you think Trump's conduct, and our relishing it, doesn't contribute to Roanoke? Doesn't make increasingly dramatic examples of violence much more likely? Think again. What happens here affects what happens there.

In Waking Up From War: A Better Way Home For Veterans and Nations, (Pitchstone Publishing, 2015, Foreword by H.H. The Dalai Lama) I share important lessons learned about what heals the violence that is war trauma, about the transformitive power of communities of safety and peace, and about how those ingredients are the same ones that our country can use right now. To wake up from violence. 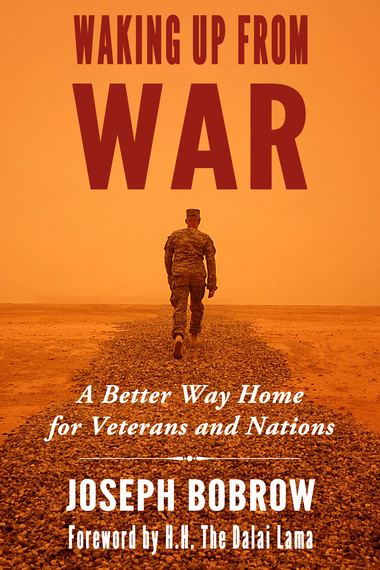