On November 19th, at about 2:00am -- an hour calculated to prevent press, human rights defenders, and the citizenry from being present -- hundreds of police officers circled the Campamento por la Paz in Bogotá's Plaza de Bolivar. By 2:30am, more than 300 police and special anti-disturbance officers had blocked the entrances to the plaza; ESMAD ("Escuadrón Móvil Antidisturbios," or Anti-riot Mobile Squad) set up barricades two blocks away in each direction. In the coming hours media representatives, human rights lawyers, and fellow campistas would be denied entrance or news of what was occurring inside. Those in the Campamento awoke to find themselves surrounded by full armed guard. 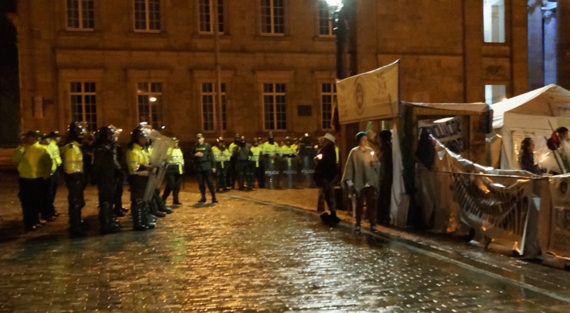 The Campamento por la Paz was established out of frustration and desperation after the "No" victory in a plebiscite meant to ratify peace accords between the government and FARC. An unprecedented Occupy-type movement in Colombia, the Campamento por la Paz lasted 45 nights, welcoming more and more citizens to wait, learn, sing, and advocate for change together.

But Bogotá Mayor Enrique Peñalosa, known for his crackdown on "undesirables" in public spaces, decided to forcefully end this symbol of peaceful resistance. That night, officers gave the campistas ten minutes to collect their property. Upon begging, the campistas were granted five minutes more. At the end of those fifteen minutes the officers began dragging the tents away, ignoring the crying of campistas, many of whom possess little else than that which was trashed. Many campistas are victims of the armed conflict (of which there are more than 8 million in Colombia), those whom the government supposedly affords particular protection. Yet police officers laughed as they watched fellow state agents displace the displaced, destroying tents that represented renewed hope after decades of war. 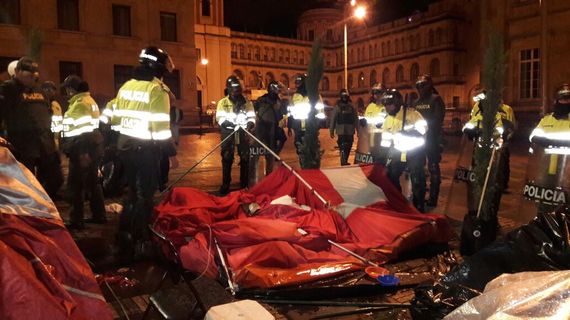 Some campistas attempted to resist peacefully. They sat down, sang, and read poetry. The officers continued to pile tents, possessions, and food supplies gathered through donations into a garbage pile. They broke and burned the table used to welcome visitors. One woman woke to an officer yelling through her tent; she asked for a moment to get dressed, and the officer responded by ripping her tent open so that he could watch. An Argentinian campista was told he would be put on a plane and deported immediately; he was only saved when a fellow campista who happened to be a lawyer confronted the police with the Argentinian's residency documents. Throughout, the campistas comforted each other, keeping each other calm and passive. 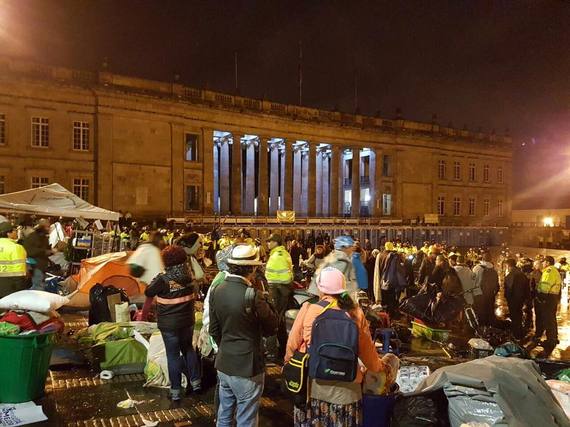 When the officers finished piling up possessions, they circled closer and closer around the campistas, hitting with shields anyone who wouldn't move towards the center. Some campistas realized that there were intelligence agents among them, dressed in civilian clothing and gathering information on who was there. Once all campistas were corralled, the officers told them that they had been held long enough and must exit the square. Those few who tried to peacefully resist, to keep singing and reading poetry, were dragged forcefully into police trucks. Officers dragged one woman into a truck by her hair. Another had her finger broken in a truck door.

When the campistas outside the square saw police trucks leaving, they made a human chain to block the road. Meanwhile, police officers were beating campistas inside the vehicles. Hearing that someone inside a truck had been injured, a frantic campista tried to convince an officer to provide medical attention; the officer responded that the injured man could die for all he cared. 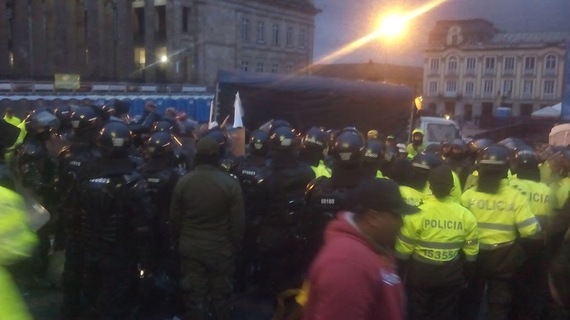 The truck doors eventually opened, an ambulance eventually arrived, and campistas had temporary relief. Until police vehicles with water hoses arrived to threaten them. All remaining campistas left at that point. Everyone was alive. And scarred. Ten people would receive medical compensation for police-inflicted injuries.

One could list all of the international, regional, and national laws broken in that dawn operation, a demonstration of state violence against a group promoting peace. But ultimately, it is public opinion that must respond, not just the judicial system. Indeed, just hours before the attack on the camp the Colombian Constitutional Court affirmed protections against arbitrary detention and police harassment in Sentencia T-594. By destroying the Campamento that night, the Mayor of Bogotá showed how seriously he takes such judicial mandates. Moreover, he calculated that there would be little political impact. That the rest of the city, the country, and indeed the world would go on sleeping.

The destruction of the Campamento por la Paz epitomizes the police abuse, political corruption, and intolerance of social protest that exists everywhere. Do we want politicians sending hundreds of police officers (accompanied by intelligence agents) to destroy an encampment of idealists and war victims using assemblies, pedagogy, and song to create a better country for their children? If not, are we doing what we can to voice that, and to support the activists on the front lines of civil rights battles? Social changes throughout history have been triggered by protest, by youth, by students. Using public space to claim rights is not new, nor is violent state response: examples include Selma, Tiananmen, and Tahrir. Yet in those cases, that violence did not signal the end of a movement: it helped awaken the rest of society to government injustice. The campistas of Campamento por la Paz are not deterred. They are healing and planning to continue their efforts to build a more peaceful, equal, and just Colombia. How will you support them?