For all their popularity, video games -- violent ones in particular -- get a pretty bad rap. They've come under fire for making our kids lazy, insubordinate, and -- especially in the wake of recent mass shootings -- prone to murderous violence. Adam Lanza, the troubled young man who killed 27 in the Newtown, Conn. shootings last December, was said to have been obsessed with violent video games, and 2011 Norway shooter Anders Breivik told a court that he had trained for the massacre by playing Call of Duty.

But just because violent video games are sometimes associated with real-life violence doesn't necessarily mean the games cause it. A 2011 study showed that men who played violent video games for one week at home showed less activation in brain regions associated with controlling emotion and aggressive behavior. But the short-term increase in aggression "seems not to be something specific to computer games," psychologist Vaughan Bell, a Visiting Researcher at King's College London, wrote in a recent article in The Guardian. "Television and even violence in the news have been found to have a similar impact."

Other recent research suggests video games can have positive effects on the brain.

Scientists have known since the late 1980s that playing video games -- even for short periods of time -- can improve reaction time and perhaps boost hand-eye coordination. And new research, including studies conducted by University of Rochester cognitive scientist Dr. Daphne Bevelier, suggests that game-playing can bring significant improvements in visual acuity.

Her studies measure games' effects on all sorts of cognitive functions, including learning, attention, multi-tasking, information-processing and decision-making.

Recently, her lab has studied the effects of playing 'first-person shooter' action games. In a June 2012 TED talk, she noted that people who regularly played these video games have better vision than non-gamers in two key respects: gamers, she says, are "able to resolve small detail in the context of clutter...[and] able to resolve different levels of gray." The latter is particularly important, she says, because it could mean the difference between slamming on the brakes and hitting another car on a foggy night. 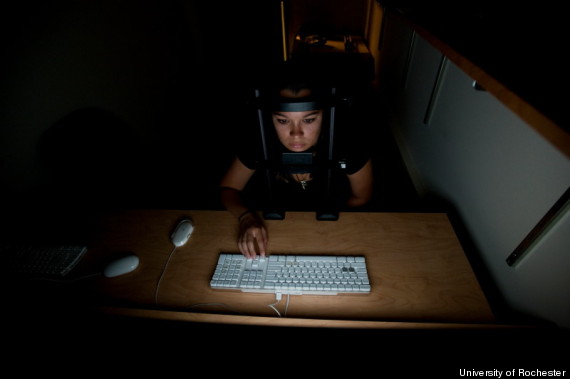 A test subject tries to figure out which direction dots on a computer screen are moving on average during a 2010 study conducted by Dr. Bavelier's lab at the University of Rochester.

In order to make sure the frequent gamers didn't just have these abilities to begin with, Bavelier and her colleagues assigned non-gamers a steady diet of gaming, and measured their reactions before and after. Even among professed non-gamers, a little dose of gaming had positive effects. In fact, "We looked at the effect of playing action games on this visual skill of contrast sensitivity, and we've seen effects that last up to two years," she told NPR in an interview.

These and other beneficial effects have led Bavelier and her team to try to make games that address certain medical needs. She says they are at work developing "games for patients with low-vision...to have an impact on retraining their brain to see better."

But don't think of these positive effects as carte blanche to play for ten hours straight. Excessive gaming -- like TV watching -- can foster an unhealthy lifestyle, sometimes encouraging obesity and other conditions related to physical inactivity. But as Bell wrote in The Guardian, "The verdict from the now considerable body of scientific research is not that video games are a new and ominous threat to society but that anything in excess will cause us problems."