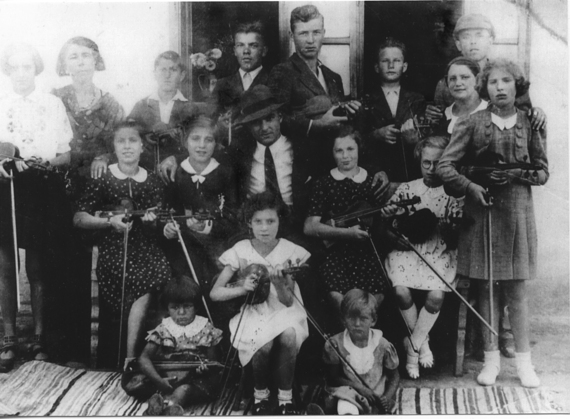 Though I've been home for several hours, I still hear violins -- Violins of Hope -- echoing through Silver Hall at The Temple-Tifereth Israel, built in Cleveland in 1924.
I am too full of feelings. I, Christian woman in a Jewish family, teacher, mother, daughter am struggling to make sense, once again, of man's inhumanity to man, the story that has caught me since I was a young woman in college and my beloved professor Dorothee Metlitski first introduced that phrase to me, "Man's inhumanity to man." Iago, of course, so consumed with jealousy for Othello; Regan and Goneril so hateful to their father, the dependent, doddering Lear; Macbeth so drunk on power and fear that he orders the slaying of Lady Macduff and all her little "pretty ones." I took several classes with Dr. Metlitski, mesmerized by her brilliance and clarity, coming to love her.

It was not until my last semester with her that her sleeve slipped back and I saw the number. It had never crossed my mind that she was teaching not literature but life. When I was a child, my Protestant family rarely spoke of the Holocaust and it seemed to have happened a long time ago. What I knew of the war I knew because I'd lost an uncle at Anzio, but the whole war was explained gently -- Victory Gardens and scrap metal collections, ration cards and no silk stockings. No mention of the murder of millions, including six million Jews. In Middle School, I read The Diary of Anne Frank, but there were few Jewish girls in my school; I had little context for what felt like a faraway tragedy that did not affect me.

Two years ago, I took an online course offered by Facing History and Ourselves (FHAO): The Holocaust and Human Behavior. I thought by that point that I knew quite a bit about the Holocaust. I knew so little. Now, Laurel, the school I lead is a FHAO School as we work to weave the FHAO vocabulary of upstander and victim and bystander and perpetrator through our whole school, for this, it seems to me, is the language of humanity, over and over again.

Then, ten days ago, survivor Joe Klein came to speak to our Upper School girls about his experience of the Holocaust, his time at Auschwitz and Birkenau. Mr. Klein is a superb speaker, wise and optimistic and hugely inspirational. I trembled in the audience, bearing witness to the atrocities of his boyhood. Later that afternoon, one of the Ninth Graders in my English class murmured, "I've had an experience listening to Mr. Klein that my own children and grandchildren will never have because there won't be anyone left." And, suddenly I am thinking of beautiful Betty Gold, who shared her story with a class of mine only weeks before she died and of my beloved college professor, gone now, too. I imagine my mother-in-law, as a little girl, with her mother and sister on the gangplank of the ship they were so lucky to board to flee Berlin in 1939. Awash in personal connections, this shiksa teacher is struck by how recent the Holocaust actually was -- am I experiencing a telescoping of time? Some inversion that events in the recent past feel closer as we age?

And sitting in luminous Silver Hall, re-consecrated today in the new Maltz Performing Arts Center in the Temple-Tifereth Israel, awaiting a concert played on violins that once belonged to victims of the Holocaust, I am overcome, verklempt.

Our friend John, who was in our wedding, designed the lighting systems in Hall -- a gorgeous lighting grid that floats over the bima, but we had no idea he had been in Cleveland in recent months to do so. He feels like one more ghost in an afternoon in which ghosts swirl in the music, touch down, wail and console. The Israeli violin-maker Amnon Weinstein has been restoring violins that belonged to victims of the Holocaust for several decades. In the video that precedes the concert, Weinstein explains that the job of the violin is to be played, to speak. These violins speak for those who were lost. Each concert is a victory.

Because the TV and radio crews are live streaming the concert, people are punctual. There is a buzz of excitement. Cleveland's Jewish community is out in force, dressed nicely in these early days of the new year. Tucked into a balcony pew through the largesse of my friend Dan, I watch the crowd flow to their seats. I'm reminded of a Russian novel in which people crane their necks to see who's there, who is with whom.

Looking up at the slender stained glass arches, which alternate with modified arches full of theatrical lighting, I wonder about those who worshipped here in the late 30s and during the war. Were their prayers filled with dread and foreboding? Today, I sense only joy, not anguish, but once again, I marvel at how recent the Holocaust was.

Both my daughters are bat mitzvahs. I am not Jewish, but the Holocaust gained immediacy for me when I fell in love with and married a Jewish man. On our way to the concert, a friend and I pick up her friend, who told us of a photograph she looked at recently. In it, her mother and aunt are dressed in matching outfits; both girls are holding violins. Her mother was one of very few in her family to survive -- all others perished; but someone gave the family photographs to friends who weren't Jewish before her family was taken away by the Nazis. That is why Margie has many family pictures. At the end of the war, Margie's mother must have returned to her village in Hungary to claim them -- pictures instead of people. Imagine handing over your photograph albums because you sensed your time was short; imagine that neighbor placing the album carefully in the bottom drawer of a dresser -- perhaps even that small act a dangerous one.

As I watch the Cleveland Orchestra members take their places and tune their instruments, some decorated with inlaid Jewish stars, I think about the lives of those who perished, each one a person with a family, each one loved, each one trained to play the violin. How many of them played the very pieces we will hear today? The program has not yet begun and tears prick at my eyes. Gentile guilt? This is an old theme for me; I used to have a nightmare that the Holocaust was happening again and that I could not save my family, my Jewish daughters and young son. Man's inhumanity to man.

Do I hear this music differently because I am not Jewish? How can I know? I know only that I feel grateful to be in this lovely space, the circular space inviting with warm stone walls into which motifs of Judaism have been carved -- I see a menorah across the way from me. The curtain covering the Ark is a russet fabric, an autumn leaf. The elegance of the space feels worthy of the carefully restored violins, artifacts that survived. How intimate it is to watch the orchestra before we actually begin. They handle these violins with reverence. I wonder how it feels to play an instrument that is not one's own; if it moves differently in one's hands, sounds different to one's ears?

Then, we are ready. The musicians I can see tuck the violins competently under their chins, flourish their bows. They are professionals of all nationalities it seems, of all faiths perhaps. Music is their shared language. And, isn't that the point? Music speaks to us across horror and across time. The beautiful strains of Beethoven, Mendelsohn float through the sanctuary, offering solace, and inspiration. Thank you, Mr. Weinstein, for restoring these violins so the story of their owners is never lost. Thank you to the visionary donors whose imagination and generosity made this extraordinary sequence of events possible for Cleveland. Where there is music there is hope. 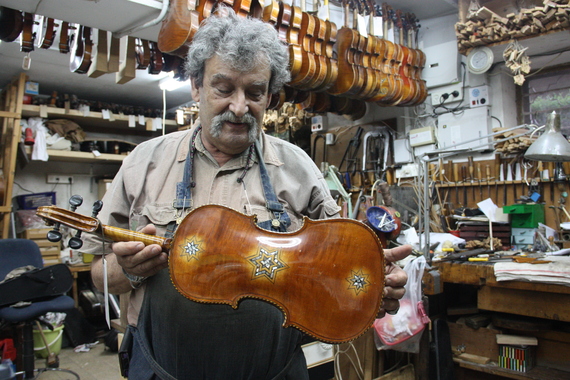