A new animated video that has racked up more than 450,000 views from faith voters and veterans this past weekend asks a simple question: Will U.S. Senators side with dictators in Iran, North Korea and Syria or with the World Evangelical Alliance, Vatican and Pentagon? It should be a pretty simple answer. But sadly, our broken political system and the lure of fundraising dollars has resulted in a handful of Senators choosing to spurn pastors and generals, and instead cast their lot with dictators. 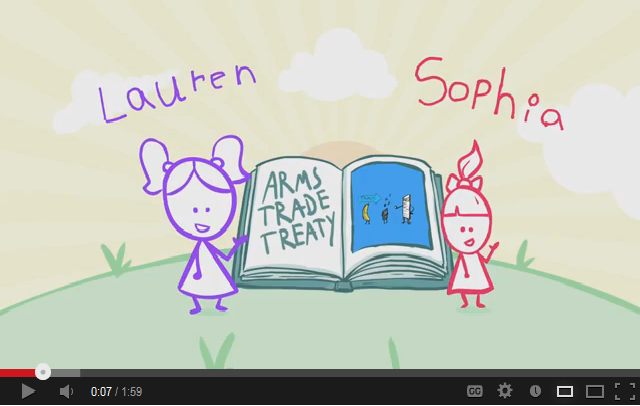 The issue at question is the international Arms Trade Treaty.

I'm glad you did. Before the Arms Trade Treaty was agreed to this past Easter there were no international laws governing the sale of conventional weapons.

The U.S. is the world's largest arms exporter and actually has very strict and good laws on imports and exports of weapons. Not all countries do, however, and this patchwork of laws makes it easier for black market dealers to get weapons and resell them to terrorists, warlords, and criminal gangs. The lack of any agreements on international sales also makes it harder for countries to hold each other accountable for questionable sales since there were no agreements on even basic things like not selling weapons that would be used in violation of human rights law.

All that changed when all the countries of the world agreed to the Arms Trade Treaty in April. There were only three NO votes: North Korea, Iran and Syria. Along with the rest of the free world, in this country, the National Association of Evangelicals, U.S. Conference of Catholic Bishops, National Council of Churches and numerous retired generals and admirals have been outspoken advocates for the treaty. Our generals say the treaty will make it harder for the terrorists killing our troops overseas to get weapons, and our pastors say it will help keep weapons out of the hands of dictators and warlords killing missionaries and innocent families around the world.

Those simple truths and the question of which side the Senators want to be on are at the heart of the pleas the two little girls make in the new video by American Values Network that has gone viral over the weekend. The seven videos addressed to different Senators have been spreading like wildfire through faith and veteran networks, generating nearly half a million views over the weekend.

So why are these seven Senators opening themselves up for such a big domestic backlash by siding with Iran, North Korea and Syria? Three letters: N-R-A. Even though the treaty has no impact at all on domestic guns laws or Second Amendment issues -- a fact affirmed by the American Bar Association analysis along with countless other legal experts -- the NRA saw it as a fund-raising opportunity. Who cares about the truth when you can send out mailers saying, give us money to keep the UN from taking away your guns?

Ironically, the NRA has actually backed off its push against the treaty (they've been distracted by the fight to ensure criminals can still buy assault weapons at gun shows!). But a handful of Senators have decided to take up the cause. Sen. Moran is the ringleader, but he's been joined by Senators Alexander, Sessions, Inhofe, Cochran, Enzi and Baucus in trying to keep the president from signing the treaty (click any of their names to see their video).

The treaty opens up for signatures today. Since so much of the treaty is modeled on current U.S. law, it is less important that the Senate ratify it than that the president sign it (basically, the former makes the treaty U.S. law and the later commits the U.S. to follow it). Obama is expected to sign it later this summer. These Senators are trying to pressure him into not signing. But countless pastors, generals, missionaries, aid workers and now hundreds of thousands of voters in these Senator's states are hoping Obama will sign it. We'll see who wins...