Want to know why things go viral? Why some products get more word of mouth? Let me tell you a secret. It's not luck.

Viral has been seen as marketing's Holy Grail. From the Harlem Shake to the Rutgers basketball coach abusing his players, hardly a week goes by without some video or news story going viral. And word of mouth and virality have a huge impact on businesses, large and small. Blender company Blendtec's sales shot up more than 700% a few years ago after videos of the CEO blending things like iPhones spread like wildfire. But what makes something go viral?

If you ask most social media "gurus," they'll tell you it's all about getting lucky. Viral isn't a strategy, it's like buying a lottery ticket. Or they'll talk about cats. Lots of people share videos of funny kitties, so cats must be the reason things go viral.

All these theories are great, except, well, they're not really backed up by anything. No data. No analytics. Just old fashioned guesses based on looking at a couple particularly noteworthy successes. It's like the idea that the Earth was flat. It seemed right until someone actually looked deeper and showed, well...it wasn't.

Virality isn't luck. It's not magic. And it's not random. There's a science behind why people talk and share. A recipe. A formula, even.

My colleagues and I have analyzed thousands of news articles and hundreds of brands, all to understand why some make the most emailed list or get more word of mouth. Again and again we found the same principles at work. Six key drivers that shape what people talk about and share. Those six principles are the basis of my new book, Contagious: Why Things Catch On, and the first principle is Social Currency.

New York City is a tough place to open a bar. Competition is fierce and it's hard to cut through the clutter. There are dozens of options around every corner.

But a few years ago Brian Shebairo launched a place that's been packed since the day it opened. In fact, it's one of the most sought after drink reservations in the city. Bookings are only available day-of and people frantically hit redial again and again hoping to snag a spot. Yet he's never advertised the bar. Never spent a dollar on marketing.

How did Shebairo do it?

He hid his bar inside a hot dog restaurant.

Walk into Crif Dogs in the East Village, and you'll find the most amazing hot dog menu you've ever seen. A Tsunami dog with pineapple and green onions, a Chihuahua dog with avocado and sour cream, and a Good Morning dog wrapped in bacon, smothered with cheese, and topped with a fried egg.

In one corner off to the side is an old-school phone booth. One of those rectangular numbers that Clark Kent used to morph into Superman. Walk inside and you'll see a rotary dial phone on the wall. Pick up the phone, and just for fun, dial the number 1. Someone will pick-up the other line and ask you if you have a reservation. And if you do, the back of the phone booth will open and you'll be let into a secret bar called, of all things, Please Don't Tell.

Has Please Don't Tell violated traditional "laws of marketing?" Sure. There is no sign on the street and no mention of it in the hot dog place. In fact, they've worked hard to make themselves a secret.

But there's a funny thing about secrets. Think about the last time someone told you a secret. Told you not to tell another soul. What's the first thing you did with that information?

You probably told someone else.

And the reason is something called Social Currency. People talk about things that make them look good. Sharp and in-the-know. Smart and funny rather than behind the times. If people go to a place like Please Don't Tell, or even if they just hear about it, they tell others because it gives them status.

Social Currency isn't just about hidden bars. It's why people brag about their thousands of Twitter followers or their kids' SAT scores. Why golfers boast about their handicaps and frequent fliers tell others when they get upgraded. McDonald's used social currency to help the McRib sandwich take-off and RueLaLa used it to turn a struggling website into a $500M business.

Want to generate word of mouth? Get people talking about you? One way is to give them a way to look good. Make people feel special, or like insiders, and they'll tell others--and spread word of mouth about you along the way.

Along with five other key principles (or STEPPS: Social Currency, Triggers, Emotion, Public, Practical Value, and Stories) Social Currency is a sure fire way to generate buzz. Will following these six principles guarantee that 10 million people spread your message? 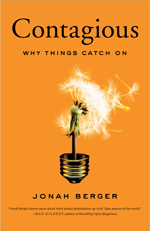 No. But it will increase the number of people who pass it on. Encourage people to tell two friends instead of just one. It's like a batting average in baseball. No one hits a home run every time, but by understanding the science of hitting you can boost your average.

The next time someone tells you that going viral is about luck, politely tell them that there is a better way. Science. Word of mouth isn't random and it's not magic. By understanding why people talk and share, we can craft contagious content. And use it to get our own products and ideas to catch on.

Jonah Berger is a Marketing professor at the Wharton School and author of the New York Times bestseller Contagious: Why Things Catch On. Want to make your product or idea contagious? Check out the free Crafting Contagious Workbook.