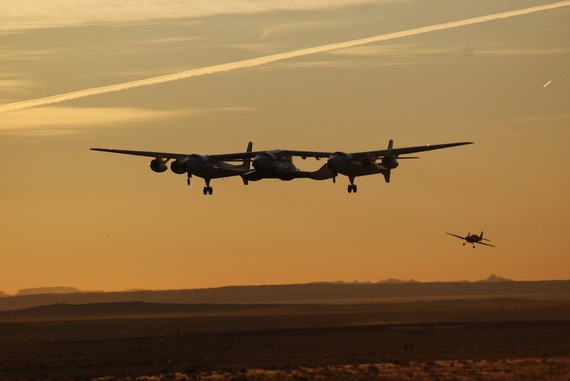 The Roman playwright, Seneca the Younger, wrote: non est ad astra mollis e terris via or "there is no easy way from the Earth to the stars." When Virgin Galactic's SpaceShipTwo disintegrated in flight on October 31 , that vehicle, named VSS Enterprise, and one of its pilots, Michael Alsbury, joined a long list of experimental aircraft and test pilots that made their final flight in the blue skies over California's High Desert. Most of these planes and their flyers attracted little attention. In fact, there was another fatal accident at Mojave just a week before this crash and the media paid scant attention.

The difference is that Enterprise carried the dreams of a celebrity owner and the hopes of a remarkable new industry. Its untimely demise captured the attention of the world. Aside from some early technical misstatements about non-existent explosions and ejections seats, the major news outlets have done a credible and respectful job of reporting on the immediate facts surrounding this tragedy. However, the public and officials are left to analyze a collection of details and technical factoids without a context in which to frame this sort of tragic event. For that reason, after a reverent pause for those involved, is important to offer the public a higher-level view of that important context.

The Mojave area has been center of high-performance military and civilian aviation research and testing since the Second World War. The work done here has gifted America with the world's most effective combat aircraft and has contributed significantly to making commercial air travel our safest form of transportation. Though such testing is itself designed to be as safe as possible, pushing the limits of aircraft performance hasn't always gone well; picture that iconic scene from The Right Stuff ... Chuck Yeager strides across a barren Mojave lakebed framed by the black smoke rising from the wreckage of his NF-104 Starfighter. That film dramatically depicted why test pilots fly planes and spacecraft before they are handed over to commercial pilots or filled with civilians. The day will surely come when this dangerous work is handled by automated systems, but until then, highly-trained men and women must assume the risks of verifying that these systems are effective for commercial operators and safe for the general public.

The test regime implemented by Virgin and Scaled Composites has been thorough, meticulous and patient. Over a period of five years, Enterprise was flown under its carrier craft over fifty times including a long trip out to Spaceport America in New Mexico. Dozens of independent drop and glide tests were then followed by several powered flight tests. The system has generally preformed as designed. The preliminary results of the NTSB investigation into last week's crash do not suggest there are any problems with the fundamental design of the vehicle or its propulsion system.

This appears to be very correctable. When the investigation is complete Virgin has stated they will make the appropriate changes to insure an event of this nature does not occur again; the FAA Office of Commercial Space Transportation will supervise the resumption of testing; and we can be sure that everything humanly possible will have been done to insure the safety of pilots, passengers and the non-participating public. The iterative development model and the current regulatory regime have been demonstrably effective here. No change of course is called for. Would-be private astronauts will continue to buy advanced tickets with Virgin, XCOR and other "New Space firms."

These buyers are more than customers. They feel vested in a mission that go far beyond the excitement of their own brief journey into space. New Space is a community working on something much bigger than building high-tech toys for wealthy thrill-seekers. While these firms, while working hard to earn a return for their investors, they are also doing their part to expand the potential of the entire human race. They are moving our vantage point one step beyond humanity's zero sum squabbles over Earthly resources.

With this elevated mental perspective, space advocates see far beyond the horizons that bound the timorous minds of critics. There are detractors who, with their own feet firmly planted on the ground, see space activities as needlessly foolhardy or as solely within the province of government. They are always at hand when disaster strikes; ready to constrain the aspirations of those bolder than themselves with litigation or burdensome regulation. To paraphrase another Roman (Tacitus), "The desire for safety stands against every great and noble enterprise."

For context, consider the 1927 Dole Air Race in which 11 planes prepared to race from San Francisco to Honolulu. Three crashed in testing, two disappeared during the event and a third vanished searching for them. Nine men and one woman were lost. Today, dozens of planes, each filled with hundreds of passenger's, make that flight daily. Personally, I usually sleep through the exploit.

With travel now so dully safe, those driven by the spirit of exploration pursue risk without purpose. For example, growing number of adventure tourists spend thousands of dollars to climb Mount Everest each year despite alarming fatality rates. 17 climbers were lost during the 2014 season.

The current and future ticket holders from Virgin, Xcor or Space Adventures will be far safer than those mountain climbers and their risk will have meaning. Those of us who can't afford to join them should encourage and applaud those who have both the means and the courage to do so. Ad astra Virgin Galactic, ad astra!