SpaceShipTwo also attained a top speed of Mach 1.4 — 1.4 times the speed of sound, which is roughly 761 mph (1,225 km/h) at sea level — during the test, Virgin Galactic officials said. 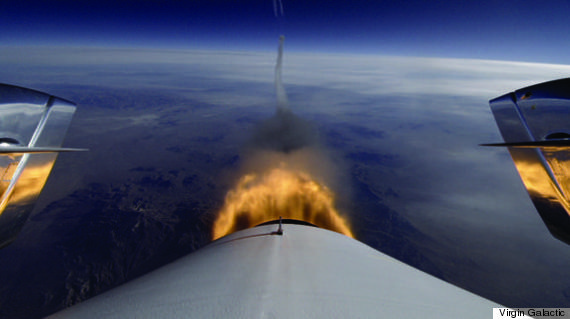 This photo of Virgin Galactic's SpaceShipTwo in flight shows the view aft as the private space plane made its third supersonic rocket-powered test flight on Jan. 10, 2014.

The 2.5-minute video, which Virgin Galactic released earlier this week, captures highlights of the Jan. 10 supersonic flight, beginning with a pre-dawn inspection of SpaceShipTwo on the tarmac. It then shows the spaceliner being lofted off the runway by its carrier aircraft, a behemoth known as WhiteKnightTwo. 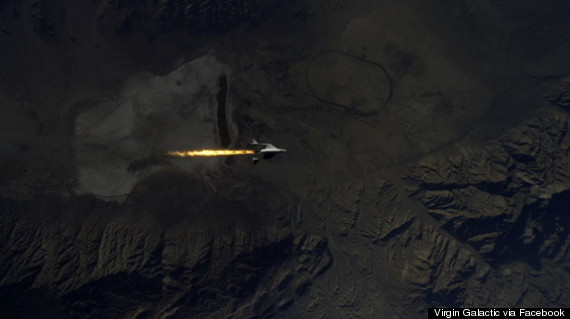 SpaceShipTwo ignites her hybrid rocket motor, as seen from WhiteKnightTwo. During the Jan. 10, 2014, test flight, the rocket motor fired for 20 seconds, accelerating SpaceShipTwo to Mach 1.4, and carrying the vehicle to an altitude of 71,000 feet over Mojave Air & Space Port.

WhiteKnightTwo is designed to drop SpaceShipTwo at an altitude of roughly 50,000 feet (15,240 m), at which point the spacecraft's rocket engine blasts into action. The video captures this dramatic moment from several different angles, incorporating footage shot from the ground and from cameras mounted on WhiteKnightTwo.

WhiteKnightTwo's cameras, in fact, show SpaceShipTwo dropping toward the parched desert below before the craft's engine kicks on, shooting a tail of flame behind the spaceliner and sending it streaking past and above its carrier plane.

The engine fired for 20 seconds as planned on Jan. 10, company officials said. The new video ends shortly after the engine cuts out, showing SpaceShipTwo dropping back to Earth on its way to making a successful landing.

The Jan. 10 test was the third rocket-powered flight for the six-passenger SpaceShipTwo, and the first one that featured Virgin Galactic chief pilot Dave Mackay at the controls. The vehicle has also made more than two dozen unpowered "glide flights" over the past few years.

Virgin Galactic remains on pace to launch its first customers to suborbital space sometime this year, company officials say. Tickets to ride the spaceliner cost $250,000, and more than 600 people have put deposits down to reserve a seat so far, including major celebrities like Ashton Kutcher and Justin Bieber.

A ride aboard SpaceShipTwo will let passengers experience a few minutes of weightlessness and afford them a view of Earth against the blackness of space.

1 / 6
Helping to pave the road for the future of commercial spaceflight, Boeing is hard at work on the research and development of a new space capsule aimed at flying people to the International Space Station.
Boeing