A report issued by the California Highway Patrol indicated that one pilot died and another suffered a major injury, the Associated Press reported. At a press conference on Friday afternoon, Kern County Sheriff's spokesman Ray Pruitt said that the injured pilot had ejected from the craft, and was "doing as well as can be expected" at the hospital.

The company said White Knight Two, the jet-powered craft used to launch the space plane, landed safely. The debris field from the space plane covered several miles, Kern County Sheriff Donny Youngblood said. Mojave Air and Space Port CEO Stuart Witt said at the press conference that flight crews had "detected nothing that appeared abnormal" before the crash. "The test community is very small. We are human, and it hurts," CEO of Mojave Air and Space Port said of the incident.

The NTSB would be sending a team to investigate the incident, Kyle Harvey of Bakersfield Now reported.

More details from the Associated Press:

The accident occurred just as it seemed space flights were near, after a period of development that lasted far longer than hundreds of prospective passengers had expected.

When Virgin Group licensed the technology from Microsoft co-founder Paul Allen, who funded about $26 million for SpaceShipOne, Branson envisioned operating flights by 2007. In interviews last month, he talked about the first flight being next spring with his son.

"It's a real setback to the idea that lots of people are going to be taking joyrides into the fringes of outer space any time soon," said John Logsdon, retired space policy director at George Washington University. "There were a lot of people who believed that the technology to carry people is safely at hand."

Friday's flight marked the 55th for SpaceShipTwo, which was intended to be the first of a line of craft. But this was only the fourth flight to be powered by a rocket. During the other flights, the craft was either not released from its mother ship or it functioned as a glider.

SpaceShipTwo was designed to provide a suborbital thrill ride into space before returning to Earth as a glider. At 60 feet long, it featured two large windows for each of up to six passengers, one on the side and one overhead.

The cause of the accident was not immediately known. One difference on this flight was the type of fuel being used.

In May, Virgin Galactic announced that SpaceShipTwo would switch to a polymide-based fuel -- a type of thermoplastic. It had been fueled with a type of rubber called HTPB.

Scaled Composites, the company that is building the spaceship for Virgin Galactic, had extensively tested the new fuel formulation on the ground, President Kevin Mickey said. He said the rocket motor configuration had not changed on this flight and characterized the new fuel as "a small nuance to the design."

Officials said they had not noticed anything wrong before the flight.

"I detected nothing that appeared abnormal," said Stuart Witt, CEO of the Mojave Air and Space Port.

Virgin Galactic -- owned by Branson's Virgin Group and Aabar Investments PJS of Abu Dhabi -- sells seats on each prospective journey for $250,000, with full payment due at the time of booking. The company says that "future astronauts," as it calls customers, have visited Branson's Caribbean home, Necker Island, and gone through G-force training.

Stephen Hawking, Justin Bieber, Ashton Kutcher and Russell Brand are among the celebrities to sign up for flights. Virgin Galactic reports taking deposits totaling more than $80 million from about 700 people.

During testing for the development of a rocket motor for SpaceShipTwo in July 2007, an explosion at the Mojave spaceport killed three workers and critically injured three others. A California Division of Occupational Safety and Health report said the blast occurred three seconds after the start of a cold-flow test of nitrous oxide -- commonly known as laughing gas -- which is used in the propulsion system of SpaceShipTwo. The engine was not firing during that test.

Friday's accident was the second this week involving private space flight. On Tuesday, an unmanned commercial supply rocket bound for the International Space Station exploded moments after liftoff from a launch site in Virginia.

Virgin Galactic had planned to launch space tourism flights from the quarter-billion-dollar Spaceport America in southern New Mexico once it finished developing its rocket ship.

Christine Anderson, executive director of the New Mexico Spaceport Authority, did not want to comment on the events unfolding Friday in the California desert or what effect they might have on Spaceport America and the future of commercial space travel.

Virgin Galactic is in line to be the main tenant at the spaceport that was built specifically to launch paying customers into space, a dream of Branson's. His company has repeatedly pushed back the timetable for when the $250,000 flights were to begin, pointing to delays in development and testing of the rocket ship.

Taxpayers footed the bill to build the state-of-the-art hangar and runway in a remote stretch of desert in southern New Mexico as part of a plan devised by Branson and former New Mexico Gov. Bill Richardson. Critics have long challenged the state's investment, questioning whether flights would ever get off the ground.

"It's an enormously sad day for a company," Burt Rutan told The Associated Press in a call from his home in Idaho, where he lives since retiring. 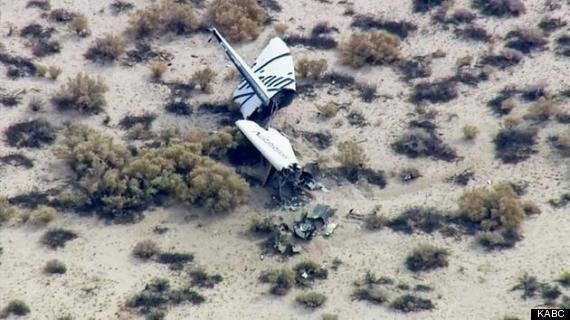 Debris from Virgin Galactic's SpaceShipTwo after its crash in the Mojave Desert. Courtesy of KABC. 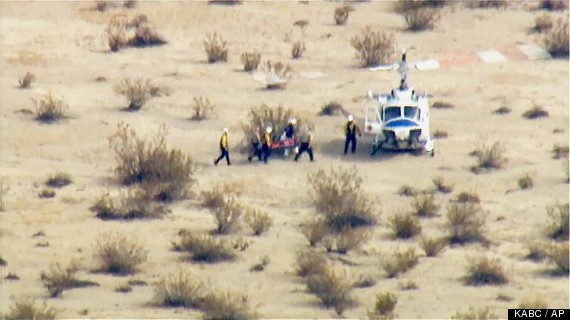 In this image from video by KABC-TV Los Angeles, a rescue crew carries a person on a stretcher to a waiting helicopter near the scene of a crash of the SpaceShipTwo in Southern California's Mojave Desert on Friday, Oct. 31, 2014. 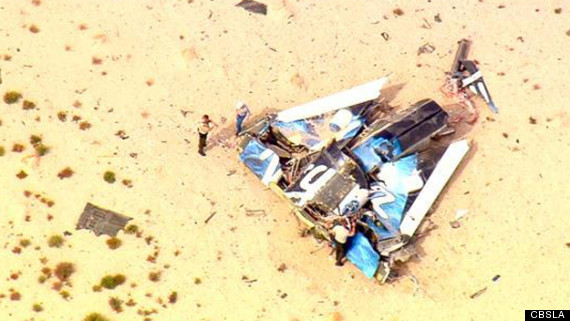 Thoughts with all @virgingalactic & Scaled, thanks for all your messages of support. I'm flying to Mojave immediately to be with the team.

'Space is hard and today was a tough day' - Virgin Galactic CEO on the crash of #SpaceShipTwo pic.twitter.com/ictmVEiYjj