Sixty years ago this week, the Virgin Mary appeared for three Catholic school girls in a Philadelphia park bush, prompting tens of thousands of pilgrimages.

On Sept. 18, 1953, the girls were on their way home from St. Gregory's Roman Catholic parochial school. On the perimeter of Fairmount Park, Margaret Keville, Mary Hagerty and Roseann Pinto, all 14 years old, saw a vision of Mary in a blue veil and white gown, City Paper reports. 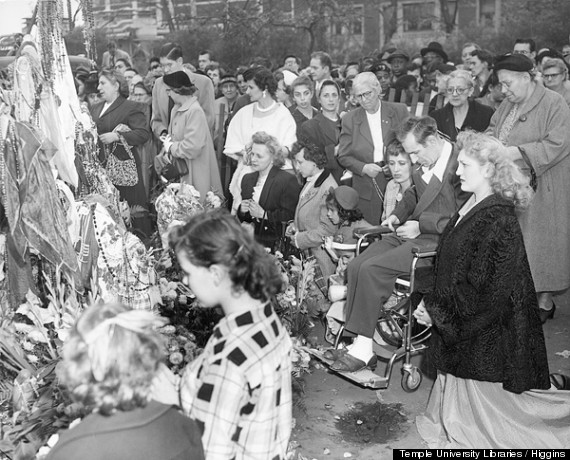 Their claim sent 70,000 believers and gawkers to the site by October of that year. Many visitors said they felt a breeze and the scent of roses coming from the bush, while others said the bush had healing powers. Meanwhile, some church officials claimed the whole thing was a "mass hallucination," the paper reported.

Rumor had it that her visage would appear again on Oct. 25 in 1953, but she didn't show up. By that time, the bush was adorned with rosaries, prayer cards and more than $53,000 in cash (adjusted for inflation). The crowds began to dwindle shortly after the botched event, but the bush -- and a wooden cross -- still stand at the site today.

A photo (above) titled "1953 Miracle at Fairmount Park" and kept at Temple University Libraries, shows an emotional crowd gathering around the bush. The City Paper reports that the bush and a shrine dedicated to it were posted on tourism materials until 1983.

There are still plenty of people talking about their memories of the "miracle" online.

Mary shows herself in many forms and many places, at least according to the people who see her. In May, an Ohio couple claims the Virgin Mary appeared in a photo they took of their daughter, who was battling leukemia at the time.

Late last year, there were two sightings in the New York area. Onlookers were especially excited about a tree trunk that showed her sacred image in Sleepy Hollow. Less than two weeks earlier, hundreds flocked to yet another tree trunk sighting in West New York.