In a closely watched, nail-biting race that after a recount and legal challenge ended in a tie, the winner of a crucial state legislative seat in Virginia apparently will be decided by a name pulled out of a bowl next week.

Next Wednesday, the names of Democrat Shelly Simonds and Republican David Yancey will be written on pieces of paper, placed into separate film canisters and then put in a bowl. A member of the state Board of Elections then will pull out the winning name, board chair James Alcorn told HuffPost.

The stakes are high in this exercise of sheer chance: If Simonds were to win, Republicans would lose majority control of the House of Delegates after 17 years.

Earlier this week, a recount had Simonds leading by one vote in Virginia’s 94th House district. But after a challenge by Yancey focusing on a contested ballot that had been ruled invalid, a three-judge panel declared that the vote would count for the Republican incumbent. That made the race a tie, with each candidate receiving 11,608 votes.

According to Virginia law, such a tie is to be broken “by lot” ― such as picking a name from a bowl. What’s not entirely clear is whether, after a winner is picked in this race, the loser will have any recourse to challenge the result. Virginia law allows for a recount after a tiebreaker ― but there has already been a recount in this race, as noted by reporter Reema Amin with the Newport News, Virginia-based Daily Press.

If Yancey ultimately prevails, the GOP will control the House of Delegates by one seat, 51-49. If Simonds ends up the winner, the two parties will have to work out a power-sharing arrangement in the chamber.

While election ties are unheard of in recent U.S.history at the federal level and rare for state offices, they do happen occasionally in local races. And in most states, such ties are broken in the same way Virginia’s will be: by some process of pure chance, including tossing a coin, drawing straws, or picking cards from a deck.

The last tie decided by lot in Virginia by the board of elections appears to have been for a House of Delegates seat in 1971.

The Va. State Board of Elections broke a tie in 1971 by getting a blindfolded guy to pick an envelope out of a big fancy cup pic.twitter.com/1EW99pzXZZ

As the new cliffhanger in Virginia awaits resolution ― and control of its lower legislative chamber is determined ― one thing is clear: Every vote can make a difference. 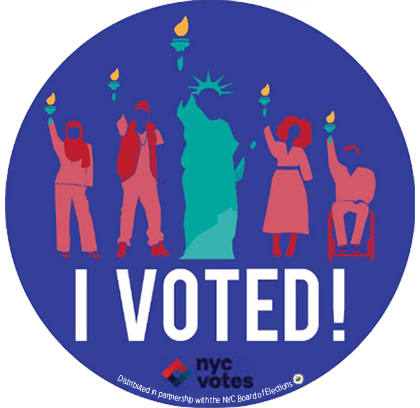 1 / 10
"No matter what shape, size, or color, New Yorkers vote with liberty and justice for all." -<a href="https://www.lil-icon.com/" target="_blank">Rajiv Fernandez</a>, 31, from Brooklyn
NYC Campaign Finance Board