A police officer and one other person were killed on the Virginia Tech campus on Thursday, according to university officials. The incident took place on the same campus where the deadliest shooting in modern U.S. history occurred back in 2007.

In a statement posted on its website, the school reported that shortly after noon, a Virginia Tech police officer made a traffic stop. The officer was then shot and killed, according to witnesses.

During a press conference Thursday afternoon, authorities said the gunman was not believed to have been involved in the traffic stop.

The shooter fled on foot toward another parking lot, where a second body was later recovered.

At the press conference, school officials and law enforcement authorities declined to identify the second person found dead as the gunman. However a law enforcement source speaking on the condition of anonymity told The Associated Press that the second body is believed to be the remains of the suspect.

Following the shootings, the campus was put on lockdown and students were urged to remain indoors. At 4:31 p.m., the lockdown was lifted.

The suspect is described as a white male, wearing "gray sweat pants, gray hat w/neon green brim, maroon hoodie and backpack," according to a 12:47 p.m. tweet from the university's VT Alerts notification system.

Law enforcement from several agencies responded with Virginia state police taking the lead in the investigation.

Full statement from Virginia Tech below:

During the traffic stop. the officer was shot and killed. There were witnesses to this shooting.

Witnesses reported to police the shooter fled on foot heading toward the Cage, a parking lot near Duck Pond Drive. At that parking lot, a second person was found. That person is also deceased.

Several law enforcement agencies have responded to assist. Virginia State Police has been requested to take lead in the investigation

The status of the shooter is unknown. The campus community should continue to shelter in place and visitors should not come to campus.

The AP adds that it was the first gunfire on campus since 33 people were killed in 2007.

The deaths came on the same day that Virginia Tech's police chief testified in DC about how the school handled the 2007 shooting. The university is facing charges of failure to issue a timely warning and failure to follow its own procedures for providing notification.

The campus was swarming Thursday with heavily armed officers walking around campus. Caravans of SWAT vehicles and other police cars with emergency lights flashing patrolled nearby. Students hunkered down in buildings.

"It's crazy that someone would go and do something like that with all the stuff that happened in 2007," said Corey Smith, a 19-year-old sophomore from Mechanicsville, Va., who was headed to a dining hall near the site of one of the shootings.

He told The Associated Press that he stayed inside after seeing the alerts from the school. "It's just weird to think about why someone would do something like this when the school's had so many problems," Smith said.

Thursday was a "study" day for Virginia Tech students in preparation for final exams, which were to begin Friday. Final exams have been postponed for now.

This is a developing story.. More information to come.. 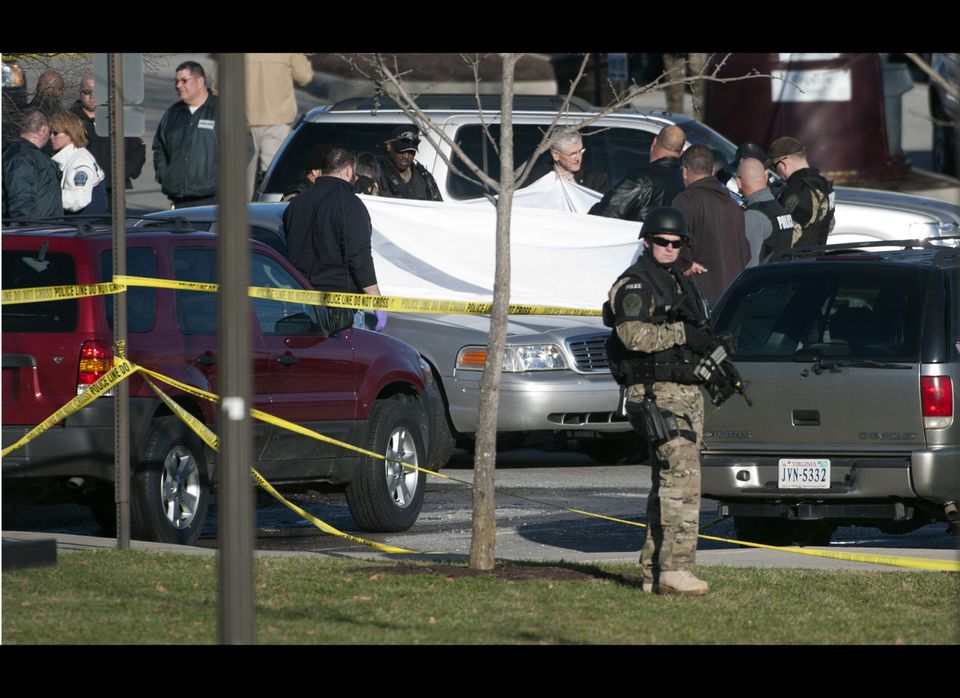 1 / 12
Virginia Tech Shooting
Police officials examine the body of a police officer shot to death in a parking lot on the campus of Virginia Tech, Thursday, Dec. 8, 2011, in Blacksburg, Va. The school said a police officer pulled someone over for a traffic stop and was shot and killed. The shooter ran toward a nearby parking lot, where a second person was found dead. It was the first gunfire on campus since 33 people were killed in 2007 in the deadliest mass shooting in modern U.S. history. (AP Photo/Don Petersen)
AP