Although Virginia Woolf is now accepted as a major writer and an early feminist, her work wasn't embraced or widely anthologized until nearly 50 years after her novels were published. Though many of her stories don't adhere to the informal strictures of modernism -- she often voiced her distaste for James Joyce and other contemporaries who wrote unabashedly about sexuality -- she's championed today for subtly calling attention to women's issues. In her novels and her many letters to her fellow thinkers in the Bloomsbury group, she artfully made clear many double standards of her day. Here's why, in addition to Roxane Gay, Bey and Lena Dunham, Virginia Woolf should be one of your feminist role models:

She was chiefly interested in the inner lives of women.
Unlike many of her literary predecessors, Woolf aimed to give credence to the unspoken emotions and interpretations we experience daily. She did this not only by placing more traditionally feminine themes at the forefront of her stories, but by penning sentences with a cadence that revealed the inner workings of her characters’ minds. A New Yorker article calls this, “The tragic lack of correspondence between intention and expression; and what these reveal about the nature of love.”

While this dissonance isn’t only of interest to women, it’s true that such “small” themes have traditionally been the subject of books by female authors, and have lamentably been shunned by critics for their “smallness.” Woolf, however, was too impressive to be ignored.

She lived in a time when she was granted few rights -- but turned the setback into a strength.
When her contemporaries were authoring stories about the violent events of World War I, Woolf, who hadn’t the opportunity to fight, instead turned her narrative eye towards its impact on domestic life, and wrote Jacob’s Room, which revealed the more personal impact of grief and trauma. She was criticized by female writers of her ilk, such as Katherine Mansfield, for not addressing war and politics more directly, but continued to do the sort of work she believed in.

She was progressive in her feminism, and even made the connection between a patriarchal society and militarism.
Remember last week's State of the Union address, when Obama called America's still-lacking equal pay for women exactly what it is: embarrassing? Virginia Woolf wrote about the detriments caused by gender-influenced salaries long before moves were made to change legislation. In A Room of One's Own, she famously explains that without financial freedom, women cannot possess full creative or intellectual freedom. While Woolf's essay directly evaluates the role of education -- which was withheld from many women of her time -- she goes on to equate schooling with income and self-sufficiency.

In a later book-length essay, Three Guineas, written on the heels of World War II, she responded to a letter from a man asking how war could be prevented. Woolf used this correspondence not only to call attention to her pacifism, but also to the fact that as a woman her political ideas aren't valued. She wrote, "behind us lies the patriarchal system; the private house, with it nullity, its immorality, its hypocrisy, its servility. Before us lies the public world, the professional system, with its possessiveness, its jealousy, its pugnacity, its greed."

She believed deeply in the power of the individual.
Virginia Woolf's advice on reading may be every high school English teacher's nightmare, but it's hugely empowering nonetheless. She writes, "take no advice, to follow your own instincts, to use your own reason, to come to your own conclusions... After all, what laws can be laid down about books? The battle of Waterloo was certainly fought on a certain day; but is Hamlet a better play than Lear? Nobody can say. Each must decide that question for himself." Asserting that there's no one correct way of interpreting a text may be controversial, but Woolf herself, who never received a university degree, was often forced to challenge conventions in order to succeed.

She saw sexuality -- and gender -- as fluid.
In a letter written around the same time as Three Guineas, Woolf not only acknowledges that gender-specific traits are socialized, but implies that gendered desires are often a source of violence. Such themes are explored thoroughly in her fiction, including her first novel, A Voyage Out, which mirrors her personal voyage from a more traditional upbringing to the intellectually stimulating Bloomsbury group she became a regular fixture of.

She's already been a feminist role model for countless artists and thinkers
Including Simone de Beauvoir and Michael Cunningham, to name a few! 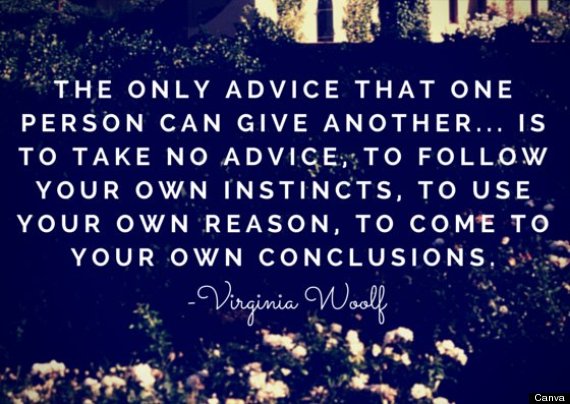 Why Virginia Woolf Should Be Your Feminist Role Model
14 Badass Female Authors
1 / 14
Louisa May Alcott
Though best known for her somewhat treacly, semi-autobiographical novel <em>Little Women</em>, Louisa May Alcott’s real life was far more adventurous than the domestic interludes she described in her most famous work. Alcott was an abolitionist; her family’s home served as a station on the Underground Railroad. She later served briefly as a nurse in a Union army hospital, going on to write a (partially fictionalized) report entitled <em>Hospital Sketches</em> about working in the hospital. Her sentimental fiction for young people has been the source of her fame, but Alcott preferred the pulpy thrillers she wrote pseudonymously for adult audiences. Alcott remained single throughout her life, once explaining that she felt she had a “man's soul, put by some freak of nature into a woman's body... because I have fallen in love in my life with so many pretty girls and never once the least bit with any man."