The subject sounds a bit crude, doesn't it? Well, imagine listening to those warnings for a lifetime. Imagine hearing that "without your hymen, you're nobody." Imagine everyone trying to scare the hell out of women who are already treated as though they were worth next to nothing. They are also treated as being less worthy than men by virtue of their religion, and are considered to be worth only as much as whatever business deal their families can secure with the families of the men who decide to take them in exchange for a substantial dowry.

Basically, the hymen is a woman's passport; it is the only way for a woman to be considered a real person.

Has anyone ever approached you to tell you that if you sleep with someone, you're basically jeopardizing your whole life? The fact that this still happens in the 21st century may sound surreal to many people. What comes to mind is Fernando de Rojas' remiendavirgos (virginity fixers) in La Celestina: those surly ladies who "reconstructed" the virginity of many women unfit for marriage in the hypocritical society of the 15th century.

"The hymen, in these societies, is worth its weight in gold."

Do you understand the issue? Let me tell you, at least, how they see it in those societies where tearing a hymen is still considered haram (forbidden by religion). All this fuss is all about a thin piece of skin, a remarkably thin piece of skin --and one that some women are actually born without-- that acts as a kind of gateway between the outside world and the inside of the vagina. The hymen, in these societies, is worth its weight in gold.

Socially, religiously, and morally, that sensitive door must remain closed until you find that one key that will be used for the rest of your life. That lucky man who will open it for the first time --gently or not-- will help his wife become a real woman. Before then, she wasn't considered a real woman. Oh, and that door is so valuable that it's worth more than your worth as a person, a human being, or a woman. So, you think you're a great and multitalented person? You studied at Harvard? You have great qualities? Maybe that's all true, but it doesn't matter. You're not worth the same anymore because you've lost your virginity.

But let's get back to the subject at hand. Many women (I do not like to classify them as Muslim, or Arab, or the like, because this has also happened in Catholic Christian Spain) have faced this. It certainly, and fortunately, hasn't happened to all the females in the world. But hundreds of thousands of females have experienced this; from the moment they were born, their mothers warned them against the perverted men who will want to steal their most prized piece of meat: their hymens.

"These are stories that take place in Morocco, Spain, Egypt, the Netherlands, and France."

Let's talk about Morocco or Egypt, the cases I've explored the most. Let me say first, though, that many women who will read this will say that they are saving their hymens because they want to. They have all my respect and admiration. The rest do it out of fear-- they've been told all their lives how important their virginity is. Out of fear, they act like saints until their knight in shining armor finally arrives. 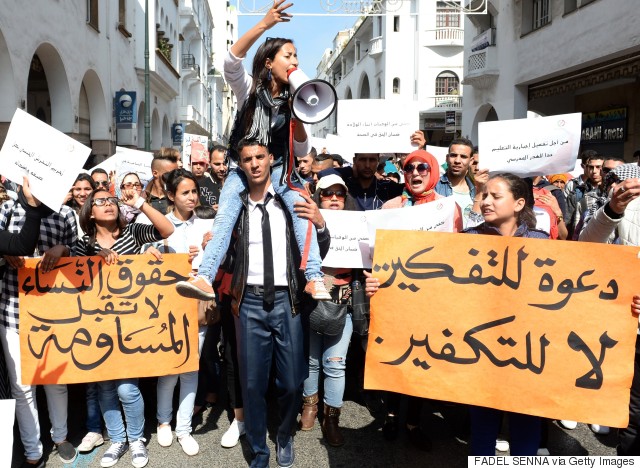 Moroccans shout slogans during a protest calling for gender equality in Rabat on March 8, 2015. The placards read: 'An invitation to think not to blaspheme', 'We won't compromise on women's rights.' (Fade Senna/AFP/Getty Images)

The others, the "used" ones, are considered to be whores who will suffer for making a mistake, or for being free.

In a country like Morocco, do you know what the consequences can be for a woman who decides to take control of her own body? Of her vagina? The first thing she'll face is being shunned and rejected by her family.

Following this abandonment, she will try to look for a man who's willing to marry her regardless of whether or not she's a virgin. She may or may not find that person. If she's lucky, he might accept that she has been deflowered by someone else before him. But if she's not lucky... well, there's always the option of trying to hide her shame with a hymenoplasty, an operation that reconstructs the hymen. She'll do it to avoid being shunned and abandoned by her husband.

It's a very harsh reality for those who have the misfortune of ending up pregnant out of wedlock. Regardless of the selfishness of many men, who consider them to be girls to use and discard, and regardless of the lack of sexual education, it is the victim, yet again, who will pay the consequences. She may threaten to report a rape so that the man, to avoid prison, would choose to marry her. This will save him the legal trouble and will subject her to a life of misery, which she will endure for the sole purpose of preserving her family's honor.

Another scenario is for him to disappear and refuse to take care of the child. What then? Her family will reject her and she'll end up on the street. What would she do there? She could leave the child at the gates of a place that she believes would take good care of a newborn baby (this would explain the number of overcrowded orphanages in Morocco), or she could decide to keep it, finding work whatever she can.

"Does anyone really know if they would choose to be sexual with three men, with one, or with none, if they had the option?"

Being a single mother is not exactly easy in a society where the highest authority is the heshuma ("How embarrassing!" in Moroccan dialect). No one will want to hire her. Prostitution is sort of an easy way out, for nobody would ask for explanations if you're willing to sleep with hungry scoundrels (sexually speaking, that is) who pay good money and don't care about your life's story.

This last option, one of the most common ones, condemns women to live with the humiliation of being whores and being rejected by their families. Their children? They will always be bastards, "haram children," rejected wherever they go.

It sounds like an exaggeration, right? Doesn't it sound like a different world? Well, it isn't. This is something that happens every day before my eyes. Some look at this with critical eyes, while others justify it with a vague sentiment: "This is our culture," they say.

But no matter how you look at them, these are stories that take place in Morocco, Spain, Egypt, the Netherlands, and France. These women are punished by a tradition they never chose, one that rarely gives them an option to escape.

Has anyone asked them what they want? Does anyone really know if they would choose to be sexual with three men, with one, or with none, if they had the option?

Really, mothers and sisters, do you think that the first time is always wonderful, and that from then on it must be "forever"? Has anyone told them that they're worth what they're worth because they're human beings, and that they ought to be respected as human beings? Has anyone ever told them that honor is a subjective issue that has a different meaning for each of us?

This post was originally published on HuffPost Spain. It has been translated into English and edited for clarity.