The antidote to racism partly lies in empathy, or the willingness to "walk a mile in someone else's shoes," as the saying goes. But scientists from universities across Europe are taking the maxim one step further, providing people an opportunity to experience life in someone else's skin by experimenting with virtual reality as a means of helping people shed racial stereotypes.

Researchers from London and Barcelona teamed up to discuss their recent experiments on virtual reality and race in an opinion piece for the journal Trends in Cognitive Sciences, published Dec. 15. The researchers found that if people got the chance to physically experience their own body with different skin colors (or ages and sexes), their unconscious biases against other racial groups could be diminished.

This isn't merely a question of changing mentality or perception. The experience of "living" in different skin triggers sensory signals in the brain that allow it to expand its understanding of what a body can look like. This can "cause people to change their attitudes about others," wrote the study's co-researcher, Professor Mel Slater, a part-time professor of virtual environments at the University College London and research professor at the University of Barcelona.

"Our methods and findings might help us understand how to approach phenomena such as racism, religious hatred, and gender inequality discrimination, since the methods offer the opportunity for people to experience the world from the perspective of someone different from themselves," said Professor Manos Tsakiris of the Royal Holloway University of London in a press release about the study review.

The research has special significance in the wake of the deaths of Staten Island resident Eric Garner and Ferguson, Mo. teen Michael Brown, which U.S. Attorney General Eric Holder said have raised issues over "implicit bias and pervasive community distrust," as reported by CNN.

The authors reflected on three different experiments they had conducted in the past. In the first, called the "Rubber Hand Illusion," white participants were made to watch a dark-skinned rubber hand being stroked on a screen, while their own hand was stroked at the same time. This "synchronous stimulation" caused participants to feel as if they were inhabiting that rubber hand, or that it was a part of their body. 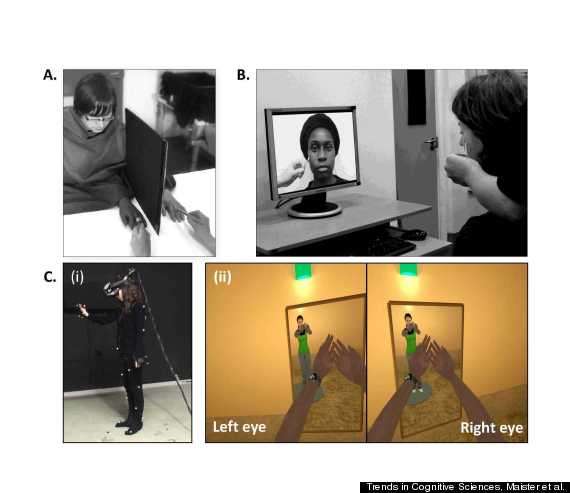 In the second experiment, called the "Enfacement Illusion," white participants watched a video of a face of someone belonging to a different racial group than them. In the video, while the face was being stroked by a cotton bud, an experimenter was stroking the participant's own face at the same time -- again, making participants feel as if that "other" face was their own face.

In the final experiment, called "Full Body Illusions," white female participants were asked to take a racial Implicit Association Test (IAT)--a computerized task which can reveal unconscious racial biases. Then, the women put on a virtual headset that gave them the illusion of being in an avatar's body, which was either white, black or purple (see video below). Afterwards, the women took the racial bias test again.

The women embodied in the black avatars became less biased against black people in their test scores. The women who embodied white or purple avatars showed no change.

"Generally using these techniques, it is possible to give two sides of a conflict an experience of what it is like to be a member of the 'other side,'" Slater told The Huffington Post in an email. "This should help to build empathy."

"The fact that two groups independently had similar findings makes me confident that this was not just a fluke result," Slater added.

While the researchers don't know if virtual reality can be used in the long-term to reduce racism, they do believe it may be used to help people--including the police--better understand what it's like to be a person of another race.