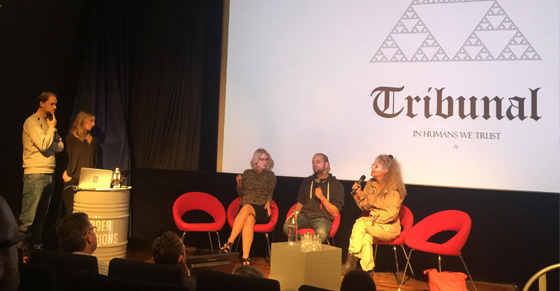 For those of us who once lived in the former Yugoslavia, The Hague is the symbol for international tribunals. Our bloodstained nation is just a myth nowadays, but this court, a congelation of nations, still exists in a building in the Netherlands, processing our historical war crimes.

I stood next to the Dutch brass plate with the name of Yugoslavia engraved on it: once it used to be the name on my national passport , nowadays it is a court. Good thing that such a court exists in the world, I always thought, but after many years of its work, I realized that it could do much better.

The rule of law is not sufficient to create justice, just as democracy is not enough to create equality. Women activists from former Yugoslavia have created tribunals to examine the crimes committed in our names. The scope of rape in wartime was one of many things revealed by these women activists with their initiatives, and for the first time in history rape was criminalized by The Hague court. Women's courts cannot issue sentences, but can shed light on neglected aspects of wartime suffering, or the postwar transition to nowhere, that the world's legal systems overlook. Such is the law of Antigone or Cassandra, or of Simone Weil, who claims that in dark times of confusion and shattered legal systems , only emotions, moral conviction can determine what's right and what' s wrong.

Nowadays we have a similar need for a parallel court in the case of Edward Snowden: his coming out as a NSA spy who refuses to do his job because he considers it unethical and wrong resembles the act of Antigone. The coming out of a crazy woman, her refusal to collaborate, becomes a standard for the new justice. Of course there is no ruler's law or court created for those who rebel from their own ruling class: they are offered only silence or death. In the case of the ancient heroines death is the minimum the myth will give them, in the case of modern ones, silence and neglect, the civil death is in order.

Peter Sunde is an internet activist who suffered a sentence in prison for virtual copyright crimes committed by his Pirate Bay, which existed outside the local national laws of various intellectual property owners. His internet crimes were not even identified as such, far from being properly regulated, but after much determined struggle they found a way to jail him anyway. Speaking from experience, Sunde assured me that Snowden would never get a fair trial anywhere, and probably no trial at all, ever. So the Internet's rule of law is golden: those who have the gold tend to make the rules.

But what about the ethical, moral, and other standards of the people, of the Internet users, of the citizens, of those who are involved against their will in the grand global game of being spied upon or spying. Do they have any formal say? Not really. Do they have an opinion? Too many! Contradictory, honest and eager opinions. Not only trolls, though they are loudest. But no single place on Earth in which to state them, to discuss them, to legally argue.

During the "Crossing Borders" conference in The Hague, Peter Sunde and Addie Wagenknecht presented an idea. During the conference, they would stage a people's virtual tribunal for the Snowden case. This brief work of political art would probably be the first and only public trial Edward Snowden would ever get .

The three members of the improvised jury were happy to stage this entertaining event (Ancilla Tilia, Joerg Blumtritt, Jasmina Tesanovic). It was certainly international in flavor, since it was done in The Netherlands, by citizens of three nations with radically different national law systems. We three could debate about the meaning of NSA spying, agreeing or disagreeing about how it should be revealed, or not. And we did: we debated to reach a recommendation and two entirely different sentences. The sentences were hand-written on a piece of paper which will eventually be delivered to Edward Snowden.

There is no international court for the likes of Edward Snowden. How would it ever collect evidence from the billions of people spied upon, or weigh the injustice inflicted on them? Many witnesses gave precious testimony at the women's court, but the organizers refused to hand that over to The Hague tribunal. The Hague tribunal already discarded and destroyed material evidence which the survivors collected for the genocide of Srebrenica: personal testimonies, precious souvenirs of the dead were seen as bulky and useless to the global justice process. The genocide was declared as real by the court, and yet the guilty parties were never singled out: a global war crime without local criminals.

History is not written usually by single human beings acting alone, but in this case it will be. Snowden's coming out resembles that of many invisible victims of obscure wars. Snowden needs to tell the truth the whole truth for the sake of his own country and colleagues around the world. This is only the beginning. Truth is not a comfortable burden for him or anyone else: it takes courage and risk as well as huge sacrifice to carry that burden of conveying the silently obvious to a world that would prefer not to know. But someone must do it. It might as well be him, for the sake of a wor