Bitcoin has prompted many people to expect a revolution in the means by which we make and settle everyday payments. Our view is that Bitcoin and other "virtual currency schemes" (VCS) lack critical features of money, so their use is likely to remain very limited.

In contrast, the technology used to record Bitcoin ownership and transactions -- the block chain -- has potentially broad applications in supporting payments in any currency. The block chain can be thought of as an ever-growing public ledger of transactions that is encrypted and distributed over a network of computers. Even as the Bitcoin frenzy subsides, the block chain has attracted attention from bank and nonbank intermediaries looking for ways to economize on payments costs. Only extensive experimentation will determine whether there are large benefits.

Again, however, we are somewhat skeptical. Today's wholesale payments systems are so efficient that it is hard to see how or why one would make the costly and time-consuming effort to replace them. And the apparently high costs of retail transfers at least partly reflect factors that the block chain technology is unlikely to address.

What made Bitcoin seem so attractive? Partly, we suspect, it is simple enthusiasm for the new and unexplored. Even today, Bitcoin lacks a single definition. One source describes it as an "online communication protocol that facilitates the use of a virtual currency" (see here), while another calls it "a decentralized peer-to-peer network that allows for the proof and transfer of ownership without the need for a trusted third party" (Schneider and Borra, The Future of Finance, Goldman Sachs, March 10, 2015).

More importantly, advocates of Bitcoin (and other virtual currencies) view it as a new form of digital money whose value cannot be undermined by government fiat (since it is created and controlled by the network of users and a set of rules, rather than by a government) and whose users can remain anonymous while making payments electronically and efficiently. Bitcoin enthusiasts harken back to Hayek, who famously called for competition among currencies to promote both monetary and economic stability.

However, Bitcoin lacks the key characteristics of money: namely, a commonly accepted means of exchange, a stable store of value, and a reliable unit of account. In no country is Bitcoin widely used as a direct means of payment (let alone recognized as legal tender); in some it is severely restricted or treated as a commodity subject to capital gains taxation. As a result, Bitcoin accounts for less than 70 thousand daily transactions globally (see here), compared to more than 250 million daily noncash transactions in the European Union and more than 500 million in the United States.

In addition, Bitcoin's value is extremely unstable: the dollar value of a single Bitcoin surged from just pennies in 2010 to nearly $1150 at the peak in 2013 before plunging back below $300 in 2015 (see the chart below). Since 2012, the daily percentage change in Bitcoin's U.S. dollar value has ranged between -31 percent and +42 percent, with the standard deviation exceeding 5 percent! Had Bitcoin been employed as a unit of account over this period, all other prices would have been subject both to enormous day-to-day swings and to extraordinary episodes of inflation and deflation. 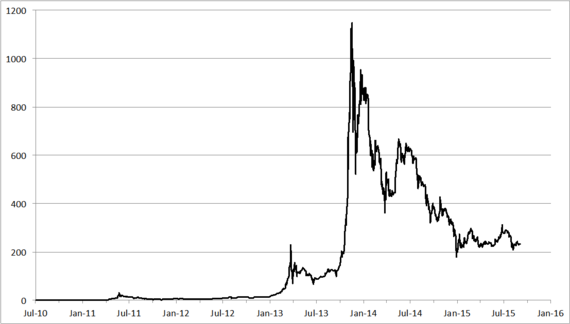 Consistent with its libertarian roots, Bitcoin's use was initially fed by those seeking anonymity -- including money launderers, tax evaders, and drug traffickers. Perhaps the most notorious users were participants in the online black market known as Silk Road that the U.S. government shut down in 2013. More recently, it turns out that most Bitcoin currency transactions are against China's yuan (see here). This leads us to suspect that its most popular current use is as a means for getting around government capital controls. (See also the news stories about Bitcoin's use in Argentina, including the one here.)

Yet, one of our colleagues, David Yermack, who teaches a course on Bitcoin at NYU Stern, argues compellingly that the surge in government attention makes digital currencies poor devices for concealing criminal activity. Indeed, the State of New York now treats a range of digital currency businesses as "money transmitters," requiring them to obtain a "BitLicense." And, despite its mathematical complexity, experts find lingering privacy concerns with Bitcoin: according to one simulation, about 40 percent of Bitcoin users can be identified by tracking their transactions in the public block chain ledger.

So, what about the block chain technology that is used for completing and documenting Bitcoin transactions?

The history of modern finance is punctuated by advances in payments technology that cut costs and broaden access. For example, over the past decade, mobile telephony has helped millions of the world's poorest people to make payments efficiently (think of the mobile money, M-Pesa, launched in Kenya), as well as to save and borrow (see our earlier post). Over a longer period, the rapid spread of credit and debit cards and the rise of internet banking have also generated large cost savings.

As in any other industry, technological advances in payments mechanisms improve living standards. But they also are disruptive. For example, check-writing, which has existed for more than a millennium, has disappeared in many countries (including most of Europe; see the following chart). It also is a fading practice in the United States, where the share of noncash payments made by check halved between 2000 and 2012 (see the latest Federal Reserve Payments Study), and probably has fallen significantly further. 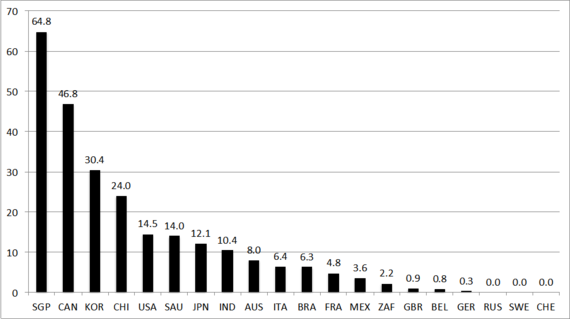 Source: BIS Statistics on Payment, Clearing and Settlement in the CPMI Countries. Japan data from 2012.

Against this background of technological change, the broadening interest in the block chain technology is still in its infancy. News reports this year focused on the efforts -- still mostly undisclosed -- of banks and others to experiment with this record-keeping mechanism. And conferences breathlessly highlight "Why Everybody Cares about the Blockchain."

There is certainly great scope for further speeding financial transactions (such as the completion of real-time gross settlement systems in the United States) and for making payments systems safer (especially from cyberattack). The Fed is pushing for a range of reforms, including a real-time transfer system for the settlement of transactions between bank accounts in the United States, the application of technologies that make payments more secure, a further shift away from checks (especially for small business), and reduced cost for cross-border transactions. Perhaps the block chain technology can help with these, or others. We are not expert enough to know.

That said, it is easy to imagine how a public network of distributed recordkeeping like the block chain could play a big role where no private mechanisms are currently available, or where competition is insufficient. Think again of the great needs of the poorest in our societies for financial access to mechanisms for payments, saving, and borrowing. Perhaps the block chain technology could establish standards -- like that of a public information utility -- that allow service providers (including mobile phone companies) to compete aggressively for new "unbanked" clients, of which there are an estimated two billion worldwide (see our recent post).

It is much more difficult to see how today's wholesale electronic trading platforms and public-utility-like clearinghouses can be made much cheaper than they already are. First, public entities play a massive role in payments in settlement. In 2014, the Fedwire completed an average of $3.5 trillion of U.S. interbank transfers each business day, for as little as $0.03 per transaction; while the ECB's real-time-gross-settlement mechanism (Target 2) completed €1.9 trillion a day, with nearly all of these processed within five minutes! Importantly, these public systems exploit enormous scale economies and network externalities, and operate on a cost-recovery basis.

Second, in key areas of the wholesale payments system -- ranging from large-scale interbank transactions to foreign exchange trades to securities settlement -- enormous clearinghouses are already dominant. Consider these three examples. The Depository Trust and Clearing Corporation (DTCC) provides custodian services for securities in more than 130 countries and clears more than $1.6 quadrillion in transactions each year in return for total revenue of $1.5 billion. CLS Bank is the world leader in foreign exchange -- settling more than $5 trillion in trades a day at a daily cost of about $0.8 million (based on annual revenues of £183 million). Finally, The Clearing House Payments system owned by a consortium of 24 large banks settles interbank transactions averaging more than $2 trillion a day, or nearly one half of the automated clearance transactions in the United States. (To be sure, these clearinghouses also are too big to fail, necessitating strengthened regulatory oversight.)

On top of these public utilities, the U.S. banking system has become significantly more concentrated since the financial crisis. As a result, the top four bank holding companies now account for 33 percent of all deposits, up from 20 percent just 10 years ago. While increased concentration has worsened the-too-big-to-fail problem, it also has boosted the share of transactions that can be settled quickly and cheaply intrabank -- rather than interbank -- adding to the scale economies of payments processing.

Our point is surely not that payments systems have reached a technological plateau. Instead, we suspect that eliminating the "trusted third party" -- a feature of the block chain technology that advocates highlight -- could turn out to be costly if it sacrifices the economies of scale that third-party clearinghouses generate. For example, can the block chain achieve the "netting" of foreign exchange, derivative and other transactions that allows the large clearinghouses to slash costs and make the payments system safer? The burden of proof is on the innovators to compete against such large network externalities.

At the retail level, there would seem to be much greater room for improvement. One example is the still-high cost of retail wire transfers across borders, typically cleared through the member-owned cooperative called SWIFT. Yet, the problem here arises at least in part as a result of the need to screen and monitor transactions in order to prevent money laundering, terrorist finance, and other illicit transfers.
For example, heightened regulatory scrutiny of cross-border payments has prompted several big banks to exit the business of remittances from the United States, thereby diminishing competition. But, the anonymity of the block chain technology collides with the public's legitimate right to thwart criminal transactions, making it nearly impossible to see how it could substitute for costly monitoring by banks and money services businesses.

So, what's the bottom line? We share with Bitcoin advocates the desire to protect privacy (see, our post on paper money), but remain skeptical about the potential for any private currency -- digital or otherwise -- to do the job better than what we currently use. And the evidence so far is that government fiat monies -- dollar, euro, yen, or whatever -- are far more stable than Bitcoin. Not only that, but if there's to be profit from issuing a currency, then we believe that it is the public that should benefit.

As for the block chain, there's plenty of room for experimentation -- with the potentially greatest benefits coming where the current payments system is the least developed. But it remains to be seen whether the public ledger can compete against the big clearinghouses that dominate wholesale payments and settlement, and whether it can ensure payments providers have the ability to reliably filter out illegitimate transactions.

Of course, even a big clearinghouse might find the block chain technology useful (see WSJ-gated story here). Wouldn't it be ironic if it did so, but wished to keep the innovation private?