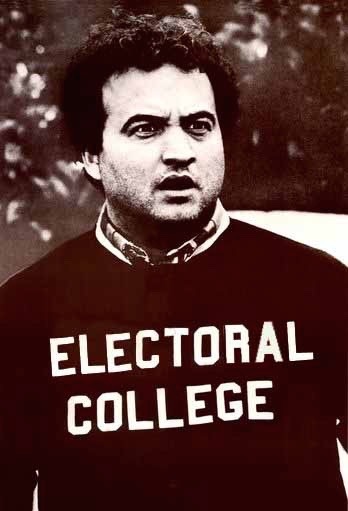 In 1960, I was the sixth grader who sat on the living room couch excitedly anticipating a fun-filled election night tabulating numbers, for which I had prepared with a pencilled chart listing the states in alphabetical order, followed in column "B" with the electoral vote quota for each, and two empty columns headed "Nixon" and "Kennedy." Another kid might have recorded strike-outs, hits and errors on a baseball game scoring sheet, but for me this game was much more fun. Little did I know that I would fall asleep before the final score was known. And of course, I had no idea of the profound importance of this democratic event.

To a generation whose presidential elections had typically not been close, the morning-after results were seen as extraordinary. Despite what was effectively a two-way race, neither candidate received 50 percent of the popular vote. A relatively small number of votes in two states would have changed the winner, and in both of those states the losing side suspected that fraud could have made the difference. But, nevertheless, the candidate who won the popular vote also won the electoral vote, as also happened in the subsequent close elections of 1968 and 1976.

The election in 2004, in which George W. Bush won both the popular and electoral vote, did not alter that conclusion, but it should have. Had slightly more than an additional 1 percent of voters in Ohio voted for Kerry instead of Bush, the Democrat would have won despite the Republican having garnered a majority of the popular vote.

But this hypothetical 2004 result has understandably not trumped the concrete 2000 result. Thus, many Republicans support and many Democrats oppose retaining the Founders' method of electing the President of the United States -- they think the system favors Republicans.

The thought of liberal New Yorkers or Californians complaining of the outsized electoral votes of conservative Wyoming citizens might make some Republicans smile, but only until they contemplate the outsized votes of citizens of liberal Vermont and D.C. vs. those diluted votes of conservative Texas. The reality is that virtually everybody is disadvantaged in one way or the other by the way we elect our president.

Here's a list of people not favored by the Electoral College Process -- and why:

All those from larger states, whose votes count as a smaller fraction of an elector than that of the average citizen.

All those from reliably red or blue states, because candidates have no motivation to pay attention to their concerns in the campaign.

All those who favor a third party candidate (though this is more an indictment of any winner-take-all system).

And if your state is in more than one list above, you are getting double-screwed.

And to pile insults upon one another, if you vote for the Republican presidential candidate in California, you will be triple-screwed. Your concerns are ignored by the candidates, your vote would count as a less than one third of that of your cousins in Vermont, Wyoming, and the District of Columbia, and in fact your vote counts as zero when all the California electoral votes end up in the Democratic Party column.

OK, so if you live in Colorado, Nevada, New Hampshire, Iowa, Missouri, Wisconsin, or Minnesota, and your first choice for president is one of the two nominated major party candidates, you may be happy that you have a say in who becomes President of the United States.

But be not smug -- your state may be drifting into one of the reliable camps, at which point your vote also will not matter. In a decade, the composition of the swing state list will no doubt change. But regardless of which states are on that list, the majority of us will be effectively disenfranchised.

The Electoral College system can be improved. The first improvement needed is to make every voter count. The second is for every voter to count equally. And the third is to elect a president who is supported by a majority of the voters. This is not a partisan issue.

The first two improvements are addressed by an innovative solution called The National Popular Vote interstate compact. Each state which adopts the interstate compact agrees to award its electoral votes to the candidate who receives the plurality of votes cast in the 50 states and the District of Columbia, but the compact only becomes valid when adopters account for a 270 vote majority of the Electoral College.

Write or email your state legislators to encourage them to join the ten states and D.C. which have already adopted the compact. When it passes in enough states, every voter will count and count equally.

After that is accomplished we can address the issue of electing a president who is supported by a majority of the voters, including those who might have chosen a third party candidate as their first choice. Meeting that goal will require a system of ranked-choice voting with instant runoff, necessitating a constitutional amendment.

I'll dream of seeing it in my lifetime.