Sometimes the best way to combat hate is by telling a story.

Comments piled up below the video, saying things like “What’s up with the rag head?” and “Couldn’t they find a normal looking American." One person went so far as to write: “I had rather cut my wrist than see this.”

Singh, who is the creator of cartoon website Sikhtoons, chose to confront the commenters' ignorance by educating them on the reality of his life in an article for Salon. He wrote:

"I have always believed there is way more than meets the eye. In that spirit, I want to share with [Facebook users] the brief arc of my life, which might help lay to rest our simplistic judgment of people at first sight."

"I don't know who these people are. I don't know their stories. If I were to judge them, then I'm a bit more like them in that moment," Singh told The Huffington Post in an interview over the phone.

Singh is an American-born Sikh who moved to India as a child, where he survived the 1984 anti-Sikh riots. When he returned to the U.S., he experienced abuse and stereotyping, struggled with his faith and ultimately found his voice through the art of cartooning. His life story offers a compelling portrait of Sikh life in America, which is all too often fraught with discrimination.

Simran Jeet Singh, a New York-based Sikh activist and doctoral student who is friends with the cartoonist, told HuffPost by email that the incident demonstrates to him "that hatred like this is a reality in our society" which cannot be written off as simple ignorance. Citing recent protests over racial inequality in Ferguson, Missouri, and New York City, he said:

"The sheer amount of bigoted comments on [the video] thread, as well as the immense number of bias-related crimes in this country, demonstrate that we have a real problem on our hands. Until we accept this problem and recognize its urgency, bigotry and xenophobia will continue to divide America."

Gap confronted a similar issue last year when one if its advertisements that featured Sikh actor and jewelry designer Waris Ahluwalia was vandalized with racist comments. The company responded by changing its Twitter background image to the ad in question, in an amazing display of solidarity with the Sikh community.

The Facebook Tips video featuring Vishavjit Singh has been viewed close to five million times, and has attracted hundreds of comments. Facebook representative Matt Steinfeld did not say whether the company planned to do anything along the lines of Gap's response in 2013, but told HuffPost that comments containing hate speech had been removed per company policy.

Singh told HuffPost that the comment saying “I had rather cut my wrist than see this" stung him the most. The cartoonist has been through a lot, from childhood bullying, to escaping religiously motivated violence, to being stereotyped after the September 11 attacks. But he has never heard someone say they would rather die than look at him.

Like many Sikh men, Singh wears a turban under which his unshorn hair is wrapped, in accordance with his religious beliefs. Although his family was not particularly religious during his childhood, Singh said he learned and internalized values of justice and compassion, which he sees as integral parts of his faith.

"The goodness of humankind, that to me is like my guiding lamp," Singh said.

As a cartoonist, Singh has integrated these values into his art. His message is one of acceptance, religious understanding and compassion, but he doesn't shy away from tough topics and often uses sarcasm and subtle humor in his cartoons to illuminate larger issues. 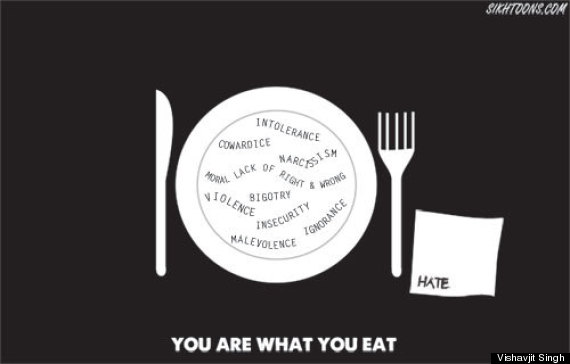 "I channel that frustration and I pour that into my cartoons or my writing," Singh said. "It's a creative outlet."

One of his pieces challenges people's fear of turbans, as demonstrated by a question some have posed to him: "What are you hiding under your turban?" 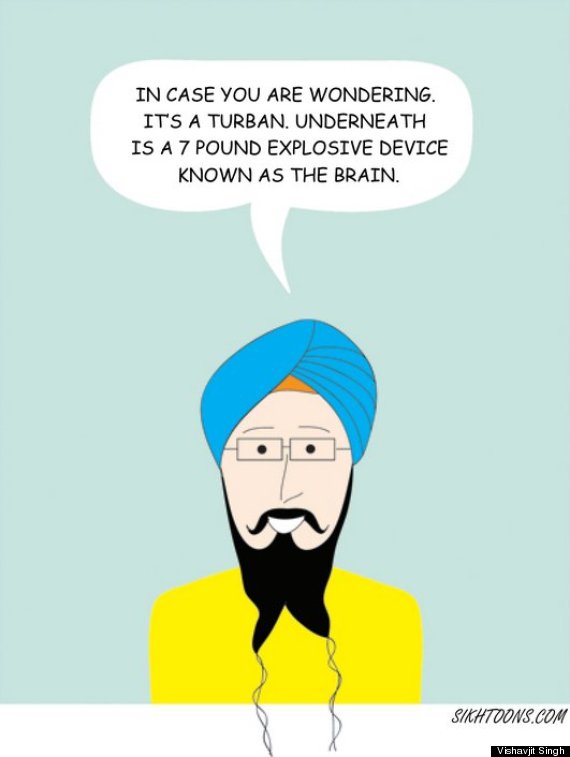 In another creative piece, this time a work of performance art, Singh dressed up as Captain America and traveled through the streets of Manhattan, "to challenge the way New Yorkers think about superheroes -- and bearded Sikhs like me."

During the day, Singh had two "chance encounters" on the subway with a 9/11 responder and his wife. On the second occasion, the couple engaged him in conversation. Two days after their interaction, Singh received an email from the man, who wrote:

When we spoke to you we were just returning from a very surreal experience at the 9/11 Memorial. I was sharing with my wife some of the locations and memories I had, and although sad my predominate memories were of the good and caring of so many people in the aftermath. [...]

You are an awesome dude and an awesome character. Your powers of good are your brass balls for getting out and doing what you do, your unwavering belief in humanity which is contagious, and the impact you are having on others which will exponentially multiply the good one man (even a superhero) can do. This also skinny, short-haired, white, conservative Christian from the southwest loves you as Captain America.

"For me," Singh said, "good gestures, good will -- they stick to me more than people's negativity."

There is also a more personal reason Singh chooses compassion over hatred. Anger takes a toll on the person who harbors it, Singh said, just as much as it hurts the one on the receiving end.

Hatred also sets up a wall between people, Singh said, which is why he would discourage people from labeling hateful commenters as "racists" or "bigots," no matter how well-intentioned that labeling might be.

"My hope is with my words and my work I can poke a few holes in this wall and we can talk to each other."