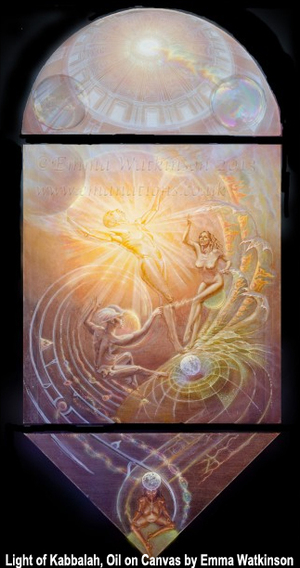 I have been reading a bunch about Mirror Neurons and contemplating Visionary Art lately and the combination has led to some profound insights. Mirror Neurons are neurons that fire while doing AND observing an act. Perhaps this is why we enjoy watching a musician and the expressions, feelings they exhibit while playing, but it brings us back to a very basic concept in human evolution and growth which involves modeling. When you observe profound art you are potentially firing the same neurons as the artist, creating new neural pathways within yourself, or both. Visionary Artists depict transcendent moments and if you haven't had an epiphany lately, you may want to take some time and explore this genre of art.

The inspiration for this article came about two weeks ago while at The Symbiosis Gathering in Oakdale, Ca. There were multiple stages of music, yoga workshops, large sculptures, native sweat lodge, and an overall immersive environment that induced ecstatic inspiration, but the Visionary Art was the most delicious dessert for my eyes. Watching artists collaborate and improvise on murals while surrounded by dancers, hoopers and live music nurtured an experience of feeling connected within the cosmic soup of creation. It was visual jazz, musicians do it all the time but we rarely share that experience with painters. 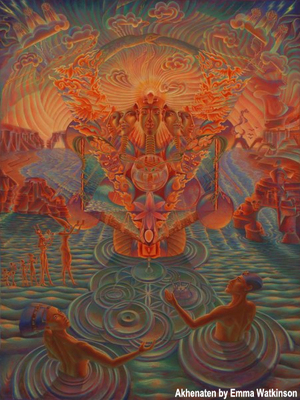 I strolled the artists booths looking at their art, but they usually weren't there. They were set up with their easels throughout the festival creating. Emma Watkinsons work absorbed me into a dream like a sponge wiping up a glass of spilled reality. Her watery brush-strokes and swirls combine with ancient motifs and geometric patterns in a symphony of colors. Just looking at her work caused me to contemplate the relationship between timelessness, eternity and the present moment. It tickles the imagination to ponder a world where everyone focused on the highest potential for humanity to live in a balanced relationship between masculine and feminine expression.

Randal Roberts
was consistently at his booth painting and talking with friends. His work is adorned with paisley scrolling bursts of colorful waves, but what stood out most was the way he riffed on familiar ideas. His interpretation (or remix as he calls it) of Sir Frederic Leighton's
Flaming June
Advertisement
allows the observer to see something old and familiar with brand new eyes. Indeed, when we change the way we look at something we somehow change the thing we are looking at. How might we apply this concept to the troublesome aspects of our current global problems? Could we change the world with one slight shift in perspective? I think so... 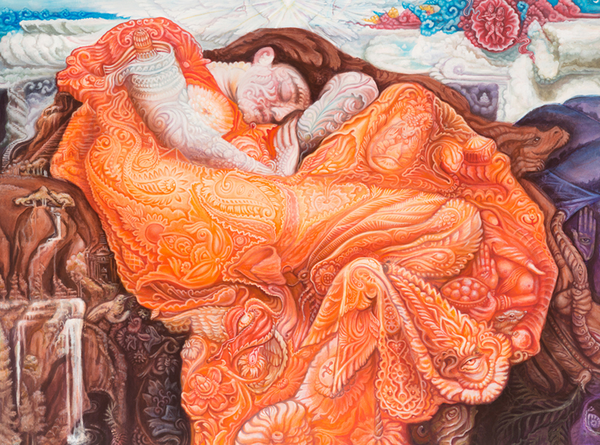 Well,
Advertisement
Jessica Perlstein
is at least a few steps ahead of us on the idea. Anyone who has ever read Starhawks,
The Fifth Sacred Thing
will be excited to learn that Jessica has contributed illustrations to the upcoming film. When I looked at her art, my mind invited me to walk right into the canvas. I'm glad I didn't because I may have hurt myself. I asked her about her creations and she simply said, "I wanna live in these places, I'm just hoping that the right team of people will see these paintings and make them real." Her vision for San Francisco in the future (below) is enough to make anyone want to stick around and see it happen.

I was drawn to
Miles Toland
as he painted through the day and under The Equinox Full Moon at The Cove Stage. Elegance rolled off of his every brush stroke. I felt grounded to see him work with the grain in the wood as he fleshed out the faces of two radiant women born of the stars (a photo of one of them is below). My own neurons were firing with endless possibility as I walked between stages and artists, dreaming of collaborative bliss while the evening breeze blew across the water that surrounded the festival. 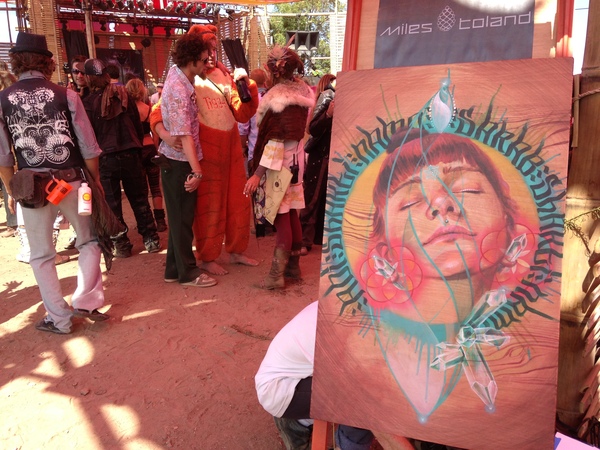 Painting by Miles Toland at The Symbiosis Gathering's Cove Stage

Amanda Sage
, another prolific artist in the genre, has a piece called
Limbic Resonance
(below). The Limbic region of the brain is in charge of emotion, behavior, motivation, and long-term memory. The concept of "limbic resonance" permeates visionary art which synthesizes the waking and dream realms. Amanda's lucid masterpieces are no longer limited to flat surfaces as she prepares to launch a clothing-line featuring her art. Stay tuned! 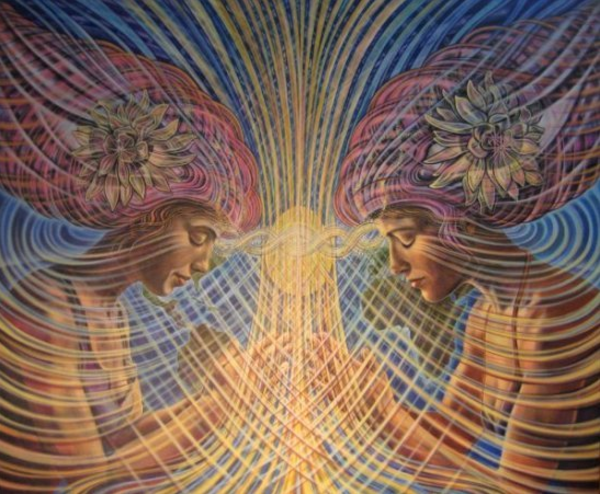 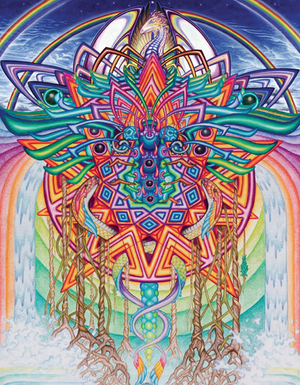 Carey Thompson tops the bill on this short introduction to Visionary Art as someone who not only can paint other worlds but he can build them too. He says, "It's fun to challenge myself to explore interactivity." Using light, structure, and form, inspired by sacred architecture from around the world, he built a giant gateway that he calls a star portal (below). The growth of the human mind and the progression of art are entwined like the patterns in Thompsons work (left).

I hope your mirror neurons are as happy about seeing this art as mine were to write about it. There are other genres of live-painting with greats like
Frenchy
Advertisement
and
Scramble Campbell
who focus on painting musicians live while they play. The conversation about Visionary Art can not be complete without touching on
Alex Grey
, or
Mark Henson.
this exploration of ideas must continue, so stay tuned for a future blogs! If you'd like to catch up on where we've been, check out my bio of
recent Huffington Post articles
, or go to
Culture Collective
Advertisement
where we highlight collaborative magic of all kinds. Give it a share... A better world is possible! 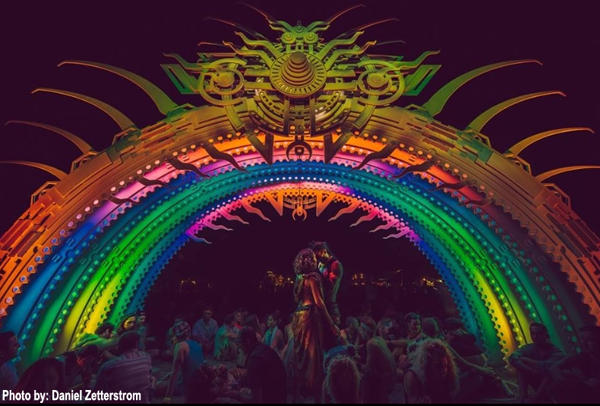