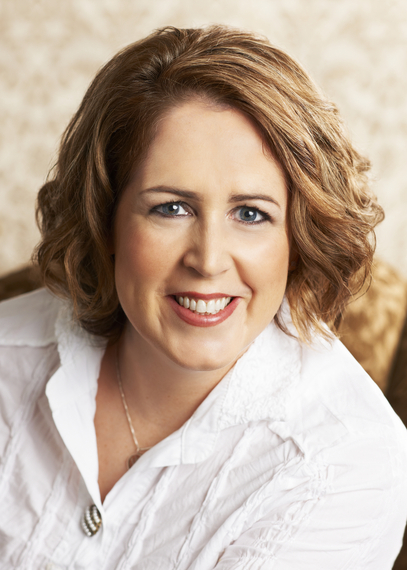 Kelley Armstrong has published twenty-one fantasy novels, thirteen of which have been part of her Women of the Otherworld series. Her novels blend suspense and the supernatural. Last year, she began The Cainsville series with its first novel, Omens. The second in this series is Visions, featuring Olivia Taylor-Jones, the daughter of alleged notorious serial killers.

Olivia has moved to Cainsville, where strange things begin to occur. She finds a dead woman in her car. The body is dressed to look like her, but the corpse vanishes before anyone else sees it. Gifted with an extrasensory ability to read omens, Olivia is certain this incident is a sign of impending danger. When she learns a troubled young woman went missing a few days earlier -- the same one Olivia found in her car -- it's clear someone killed and left this young woman as a warning to Olivia. But why? And what role does her new home play in this murder? As Olivia attempts to unearth the truth, it becomes clear that Cainsville is a very unusual town.

Much of your work has been termed contemporary fantasy, with supernatural characters superimposed on a backdrop of North American life. What drew you to this genre?
I blame X Files for my having begun writing in this genre. I was in a writers' group and promised I would write something new and bring it to the next meeting. I was watching an episode of X Files, which depicted a werewolf. He was a huge guy killing people under a full moon. I thought that wasn't the way I would write about a werewolf. So, I wrote a short story about a woman in our modern world who was a werewolf. I really enjoyed writing the story. I was a big Anne Rice fan. Growing up, I had written horror stories about monsters. Anne Rice took the stories to more of a fantasy level, and occasionally wrote from the point of view of the monster. So, it added a whole new dimension to my writing.

Your contemporary fantasy writings have been noted to share similarities with writers Charlene Harris, Laurell K. Hamilton and Kim Harrison. Is that accurate?
They are. When my first books came out, Laura K. Hamilton was doing a series with vampires and werewolves living in the modern world. The same year my novel Bitten came out, Charlene started her Southern Vampire series. Kim came along a couple of years later. So, there was this subset of authors writing in the same vein.

You also write YA novels in addition to adult and crime novels, such as The Nadia Stafford series. How do you switch genres?
I actually started the Nadia series out of pure terror. Back when I was starting the Otherworld series, the contemporary fantasy genre didn't exist. I'd finally been published but wasn't sure those books would continue selling. My agent asked, 'What else would you do if you weren't writing contemporary fantasy?' The answer seemed obvious to me: thrillers. So I started the Nadia books. Actually, most of my books have a core of mystery/ thriller in them, so for the Nadia series, it was a matter of taking out the supernatural elements.

Most of your novels have been in series form. There's The Women of the Otherworld series; The Darkest Powers trilogy; The Darkness Rising trilogy, among others. What about writing series attracts you?
When I wrote Bitten, it was a stand-alone novel. But the publisher asked if I would consider turning it into a series. I decided I could and would branch out to multiple narrators in the series, rather than following one character all the way through. Readers enjoy a series. They like to get to know a character, follow the character; but with a really long series, it's difficult to go on with only one main character. So, I decided to use multiple points of view. In my trilogies, I tell a story in three books and then feel ready to move on to different characters in another story.

Are there advantages or difficulties in writing a series?
A big advantage in a series is building readership. Once a series gets going, people begin waiting for the next book. I've found that by changing series -- by going to a different one -- there's definitely a drop-off in readers. People are not so eager to buy the first book of something different as they would be to buy the next book in an ongoing series.

As for disadvantages, you must come up with something creative for every new book in a series. When a series is doing well, it's very tempting to keep writing it, even when the creative well is drying up. It's tempting because that's where the money is. I've had to be very careful; as soon as I think I'm getting close to that dry well, I wrap the series up. I don't want to just keep writing something because it sells.

You have a degree in psychology. Does that come into play in writing your fantasy novels?
It comes into play in creating character. I love to write different and complex characters and I like having back stories for my characters. If a character has a back story, I like to consider what he or she will do in the present. Or, looking at it in a reverse way, I think 'What kind of back story will I give this character that meshes with how she is in the present?' Everyone is the sum total of past experiences. A character doesn't just spring to life at age thirty.

The Blackwell Pages trilogy was written with Melissa Marr. How did you go about co-writing those books?
Melissa and I are friends. We talked for a while about possibly co-writing something. We both wrote teen books for our daughters. We both had sons at the pre-teen stage and wondered if we could get together and write something for the boys. Melissa and I are still both alive, and we're still friends (Laughter). We had co-edited anthologies and we knew our individual working and creative patterns. We had to mesh those patterns. We have very different writing processes. I'm a planner; she's not. I write chronologically, starting at page one and writing through the novel. Melissa writes scenes here and there, and then puts them together. Knowing that was important, so we could decide how to meet in the middle.

You've written many books. What, if anything, has been the biggest surprise about writing over these years?
I always worried that the creative well would dry up. I was sure that if I wrote a book a year, I would eventually run out of ideas. Actually, the opposite has been true for me. The more I write, the more ideas come to me and it gets easier. I'm constantly coming up with ideas, but in the early days, it was tough to come up with a plot for a book each year. But after you've been doing it for a while, ideas come from everywhere.

As a writer, who were your earliest influences?
As a child I read everything I could get my hands on. In my teenage years, there was no YA fiction. I went from children's books right into horror and fantasy novels. My biggest, early influence was Stephen King. I learned from him how to make the supernatural seem quite natural -- how to place it in our world and make it seem like it belongs here. I also learned about the importance of character. Even in horror novels where you know most characters aren't going to make it to the end, it's crucial to have fully fleshed-out characters. If you don't do that, the reader doesn't care what happens to them.

What do you enjoy reading now?
I read all different genres. I read everything from contemporary fiction to thrillers to Stephen King. I'll cross over between YA and adult fiction. I read thrillers by authors such as John Connolly, Dennis Lehane and many others.

If you could have any five people over for dinner -- living or dead, writers or people from any walk of life -- who would they be?
For me, they would definitely be writers. I would just love to have certain writers in a room and be able to pick their brains. I would love to have Robert Louis Stevenson, Jane Austen, Shakespeare, Arthur Conan Doyle and of course, Stephen King.

Congratulations on Visions, the second novel in the Cainsville series. It's sure to achieve as much success as Omens.