Legend (probably a false legend) has it Iceland was named by some sneaky Vikings who, in a quest to keep it all to themselves, tried to hide the fact that their new settlement was actually a lush, green wonderland worthy of envy from the entire Nordic world.

Indeed, Iceland is so striking beautiful -- and quirky, and romantic, and adventurous -- that we can't say we blame them.

Here's why you should go there, too.

1. The Blue Lagoon will heal your soul.
This steamy outdoor spa (where the water is 98 to 102 degrees Fahrenheit, naturally!) also offers in-water massages and a swim-up bar. 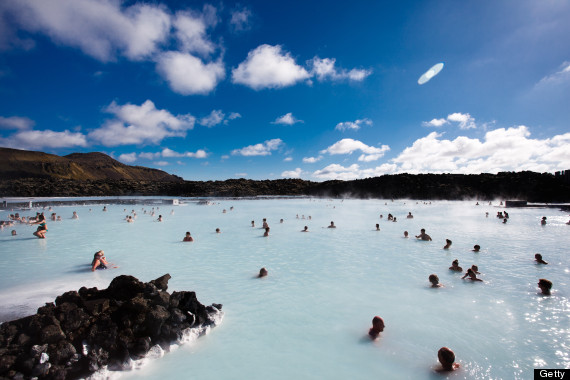 2. You can stand inside a waterfall.
Seljalandsfoss is also a great place to view the northern lights through a curtain of glittering mist. 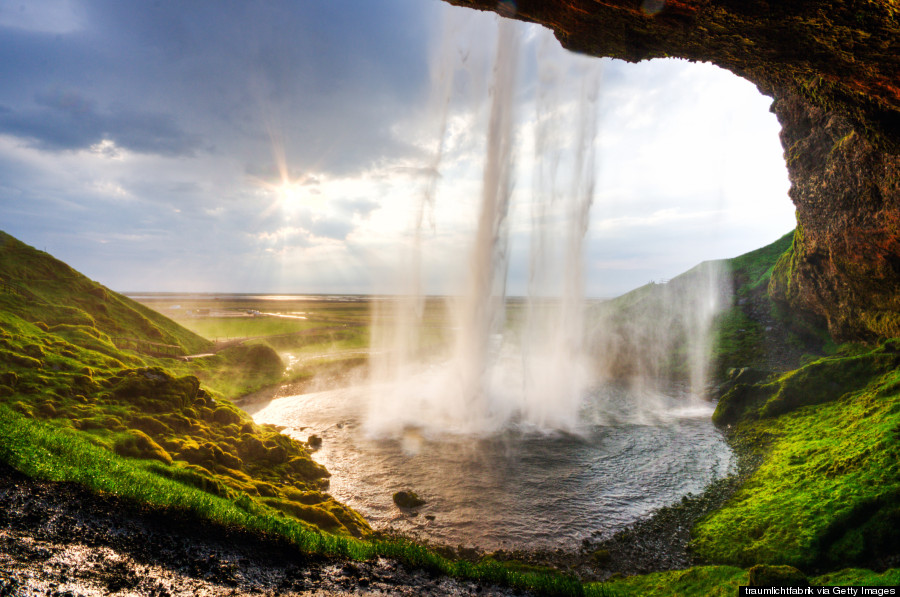 3. In fact, waterfalls are everywhere.
Take Hraunfossar for example-- it's a series of streams that gurgle out from cracks in a craggy lava field, leftover from when a volcano erupted under a glacier. 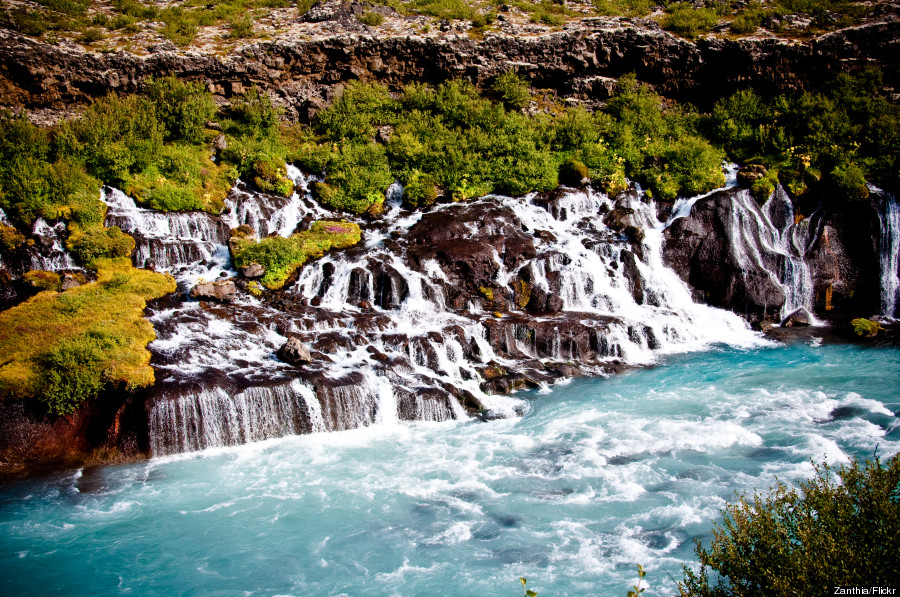 4. There are probably elves in Iceland.
But really: just last year, highway construction screeched to a halt after elf activists protested in an effort to protect the elves' forest homeland. In a survey, 62 percent of Icelandic respondents said they think it's possible elves actually exist. 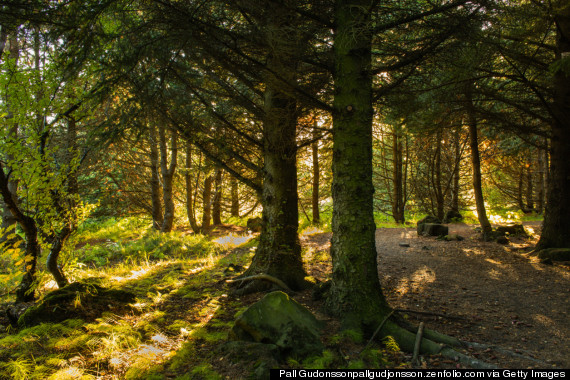 5. There are probably also aliens.
What is that firey orb descending upon the Icelandic town of Akureyri, you ask? Aliens. It's probably aliens.

6. You can scuba or snorkel between continents.
The North American and Eurasian tectonic plates and the South American and African continental plates converge in an epic underwater meet-up at the Silfra ridge. Whether you're floating above or diving to the floor of this underwater canyon, it's a wild feeling to be in two places at once... just ask Alex Mustard. 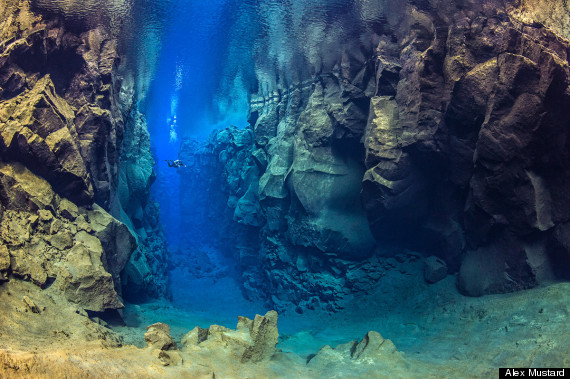 7. You'll glide with sled dogs across the snowy tundra.
"Imagine being pulled by a pack of strong beautiful huskies, the only sounds you hear are the dogs breathing and the sled softly touching the ground." ...you had us at huskies. 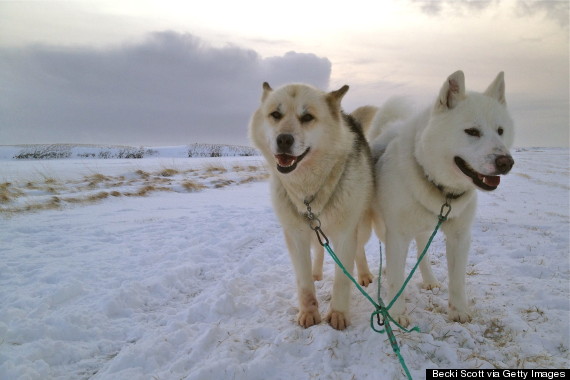 8. Nobody leaves voicemails in Iceland.
The option to leave a long, boring message still exists, but many locals say they've never received or left a voicemail in their lives. Pretty much all Icelanders are related, so they probably figure they'll just see each other at dinnertime anyway. 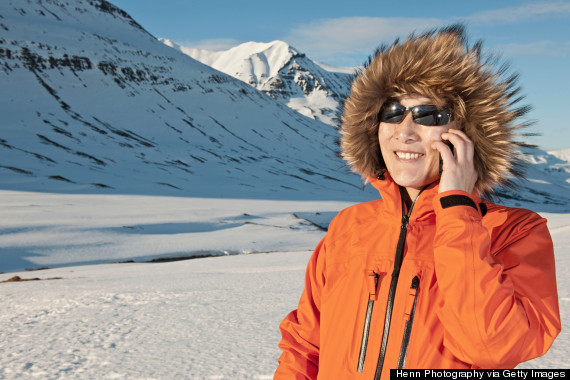 9. In Iceland, people propose to each other in caves.

10. They've taken hot dogs to a whole new level.
Icelanders typically toss lamb in the mix, thus deepening the link's flavor. They call these creations pylsur and top them with sweet mustard, ketchup, raw onions, deep-fried onions and remoulade. Or you can ditch almost all the condiments and order your pylsur "Clinton style," the way our former president did when he visited in 2005. 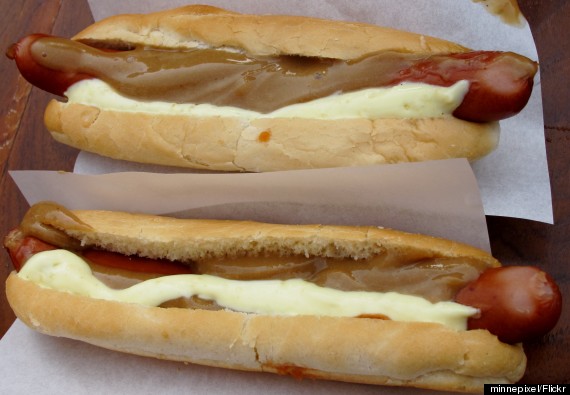 11. You can go INSIDE a VOLCANO.
At Thrihnukagigur, you'll plunge almost 400 feet into the multicolored magma chamber of a volcano that erupted 4,000 years ago. Sound too scary? You can see it via helicopter, too. 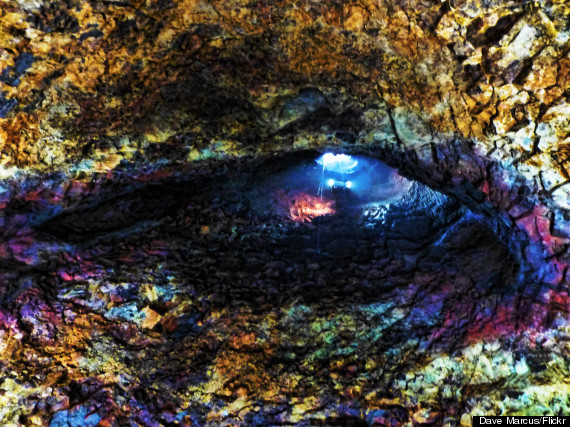 12. There's no need to fear incest.
Ever worried your lover might turn out to be your fourth cousin twice removed? Don't fret; there's an app for that. 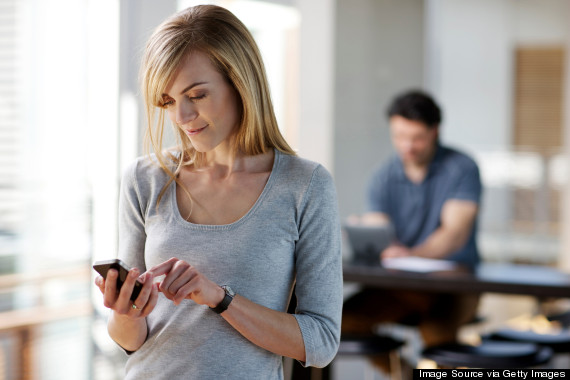 13. Strokkur geyser explodes like clockwork.
"The Churn" erupts every five to 10 minutes, shooting water up to about 100 feet in the air. 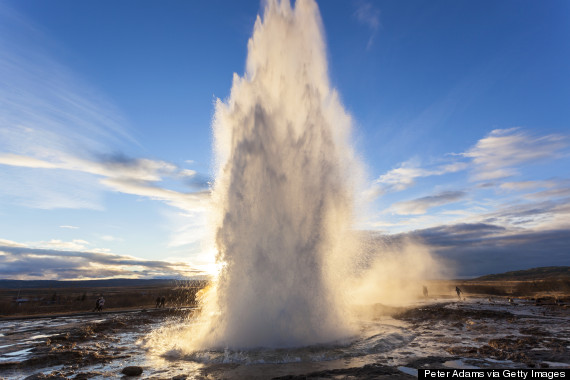 14. Iceland gets credited as having "the largest banana plantation in Europe."
It's not the case, but the rumor probably started when those crafty Icelanders tried sticking a bunch of banana plants in greenhouses. And because bananas don't grow in much of Europe (the Canary Islands are a major exception, so they're probably the true winners of the banana crown of Europe) -- voilà! Quirky modern myth is born! The remains of that failed experiment are now part of a small indoor banana farm at the agricultural university. 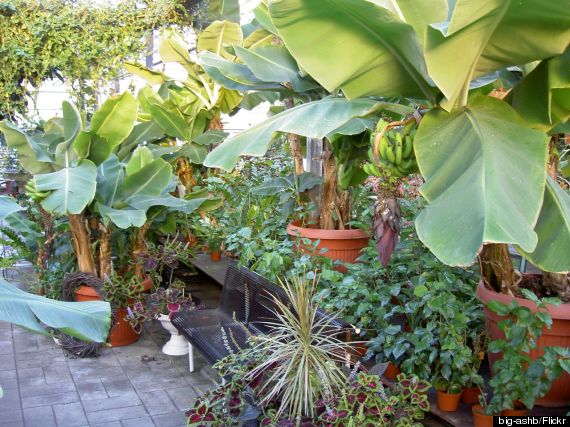 15. You can whale watch, humanely.
There are 23 types of whales in the waters around Iceland, meaning you're more than likely to spot some of those fantastic fins. Pick a boating company that's committed to letting whales have their space. 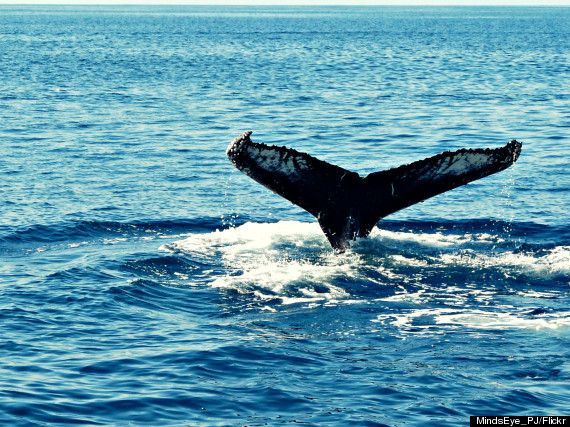 16. Iceland has already mapped your dream road trip for you.
While driving the Golden Circle, you'll pass a couple of geysers, a national park with the largest natural lake in Iceland, and Gullfoss, the country's most famous waterfall. Try completing the Golden Circle in a super jeep or snowmobile. 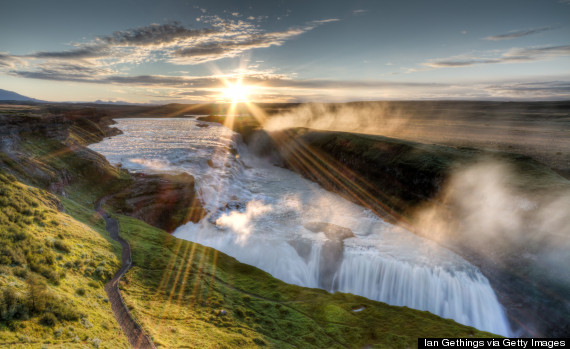 17. Watching veggies grow is a "thing."
Iceland is dark and cold for much of the year, but tomatoes grow merrily under artificial light at Friðheimar. The environmentally-friendly greenhouses yield about one ton of produce per day, and you can tour them to watch the magic in action. If that's not impressive enough, see Friðheimar's horse show in 14 different languages. 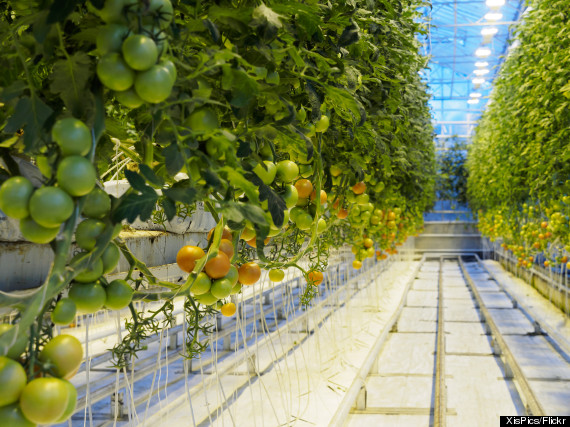 18. The Faroe Islands are right at your fingertips.
This little fairytale archipelago lies halfway between Iceland and Norway. This means it's just a hop, a skip, and a quick flight to islands full of fishing, bird watching, lighthouses, and the most precious medieval churches you ever did see. 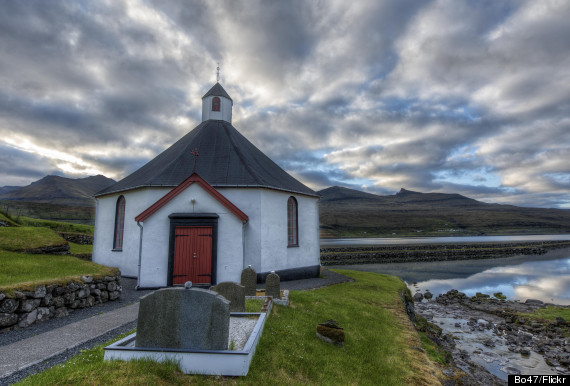 19. Sometimes, Iceland looks like another planet.
But guess what? Mount Kirkjufell is actually on the planet of Earth! 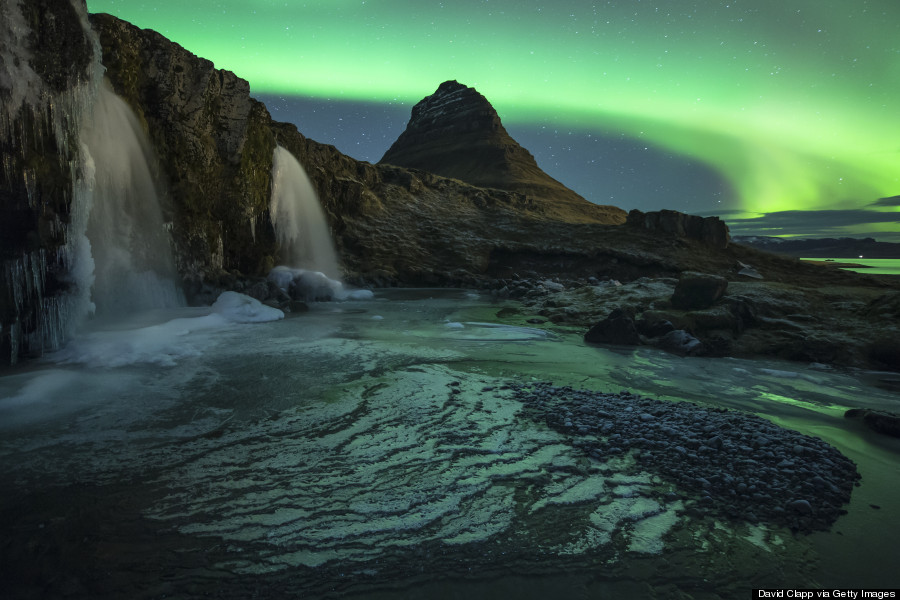 20. The sun also shines at night.
For about three months each year, the sun sets for only a niblet of time each day, and the sky is bright for a full 24 hours. This means you can play golf, hit a concert, or run a marathon in the middle of the "night." 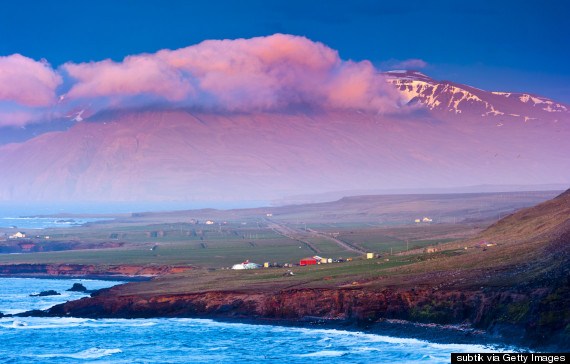 21. It's one of the best countries to catch the Northern Lights.
Thingvellir National Park -- the picturesque field where leaders of yore decided laws in an open-air forum -- is today recognized as both a UNESCO World Heritage Site and one of the best places to see aurora borealis. 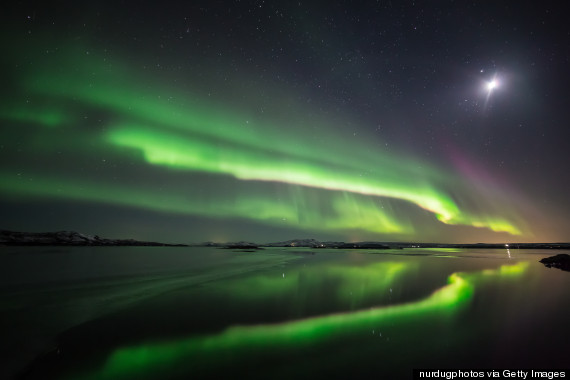 22. In Iceland, your view from the window seat could turn out as art.
...that's if your seat mate happens to be a photographer as skilled as Andre Ermolaev. 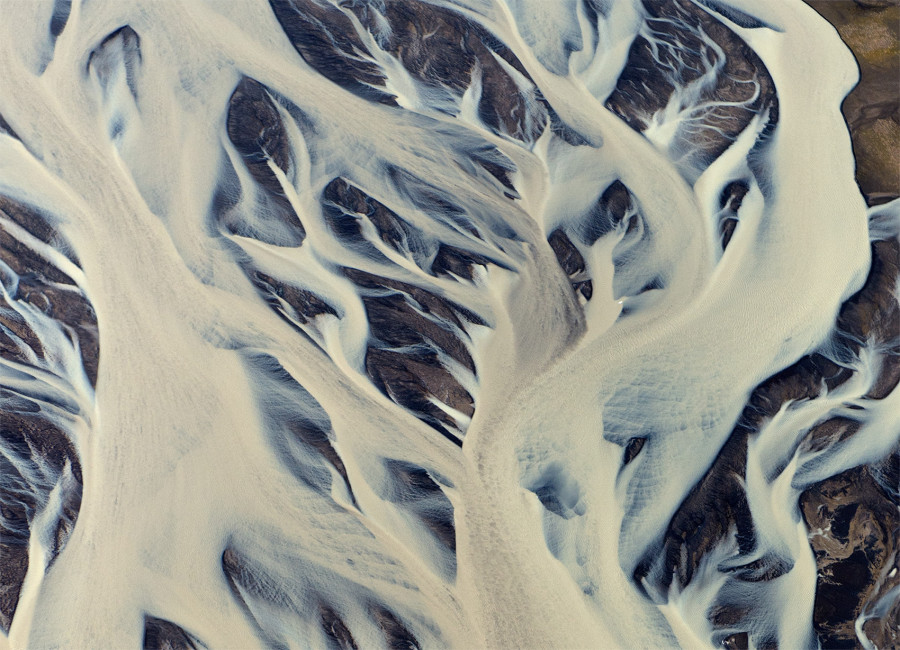 23. Hallgrímskirkja is not your typical church.
It's ornate out front yet simplistic inside. There's beautiful live music and an organ with over 5,000 pipes. Your ticket will support local charities (if you visit at a certain time), and -- wait for it -- an elevator rockets you about 250 feet up the church's tower for an astounding view of Iceland's capital city. 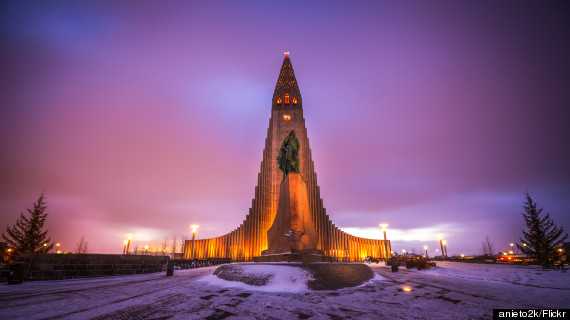 24. Icelanders make fish soup stellar.
Maybe it's the fresh Nordic seafood, or maybe it's the splash of sherry. Either way, who knew fish soup could be delicious? Order a warm bowl on a cliff overlooking the ocean. 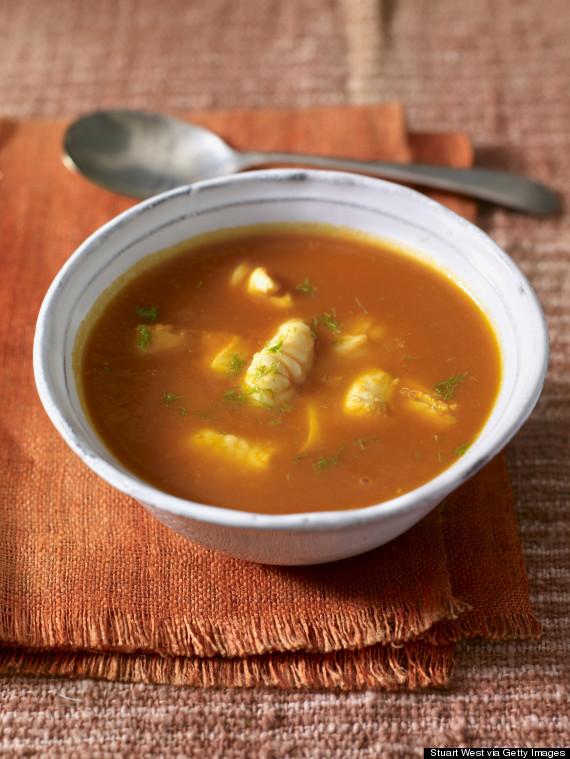 25. Breiðafjörður.
We can't pronounce it either, but it's beautiful. 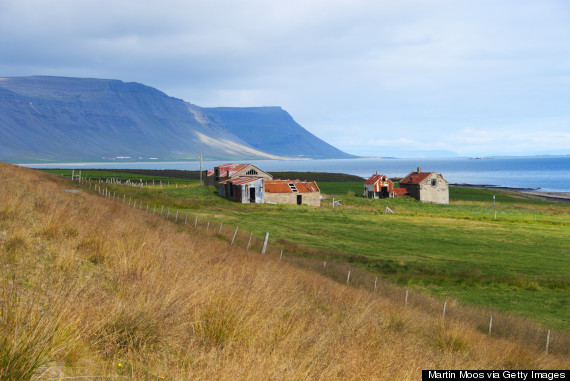 26. James Bond has graced the glaciers.
Iceland's glaciers and glacial lagoons have set the scene for "Batman" and multiple 007 movies. 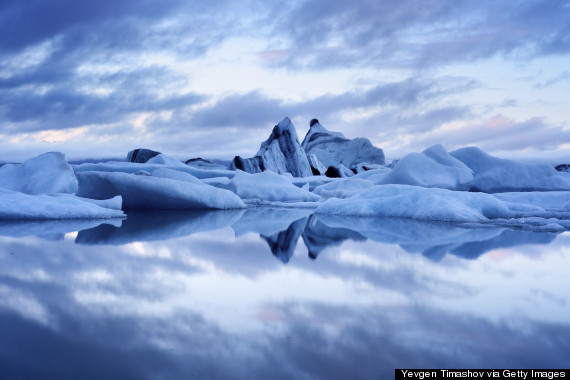 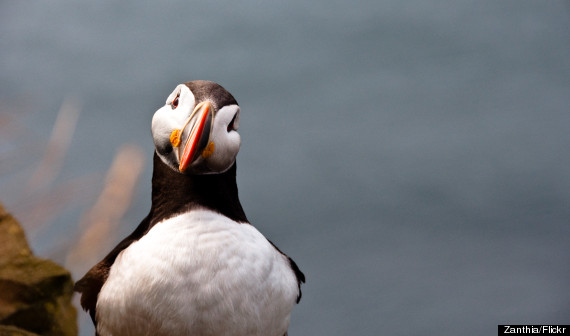 CORRECTION: A previous version of this post stated that Iceland had the largest banana plantation in Europe. The current plantation is relatively small, and the leading candidate could not be identified at this time.