As a powerhouse songwriting duo, Jerome "Jerry" Leiber and Mike Stoller cranked out some significant hits in the '50s and '60s, including "Hound Dog," "Jailhouse Rock," "Stand By Me" and "On Broadway." When producers Stephen Helper, Jack Viertel and Otis Sallid decided to create a musical revue of their work in 1995, little did they know that they'd have the longest running musical revue in Broadway history.

And there's a reason for that -- Smokey Joe's Cafe is simply a toe-tapping good time. And Theo Ubique's rollicking production, which has been extended multiple times, serves up the music with energy, huge vocals and a shimmy or two.

The show's biggest assets, aside from the material, are its big-voiced cast, starting with Robin Dasilva in a star-making turn. Her take-no-prisoners delivery of "Fools Fall in Love" is worth the price of admission alone. Speaking of prisoners, if there's any moment that feels a lost opportunity, it's "Jailhouse Rock" -- arguaby one of Leiber and Stoller's most well-known tunes. Here, it's treated as a throw-away moment.

Another standout performer in this mega-talented cast is the soulful Vasily Deris, who knows just how to pace a number. If only he'd been given a bit more to do.

Director/Choreographer Brenda Didier moves the delightfully plotless revue along with energy and verve. She makes it feel like we're part of a musical reunion, with the memories these classic tunes conjure up serving as the inspiration for the action.

I know I left the Royal George Theatre smiling and totally forgetting that earlier that evening a couple had spilled red wine all over my white seer sucker pants. If that's not a rave review, I don't know what is. 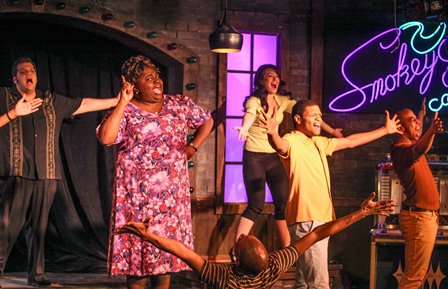 The cast of "Smokey Joe's Cafe"